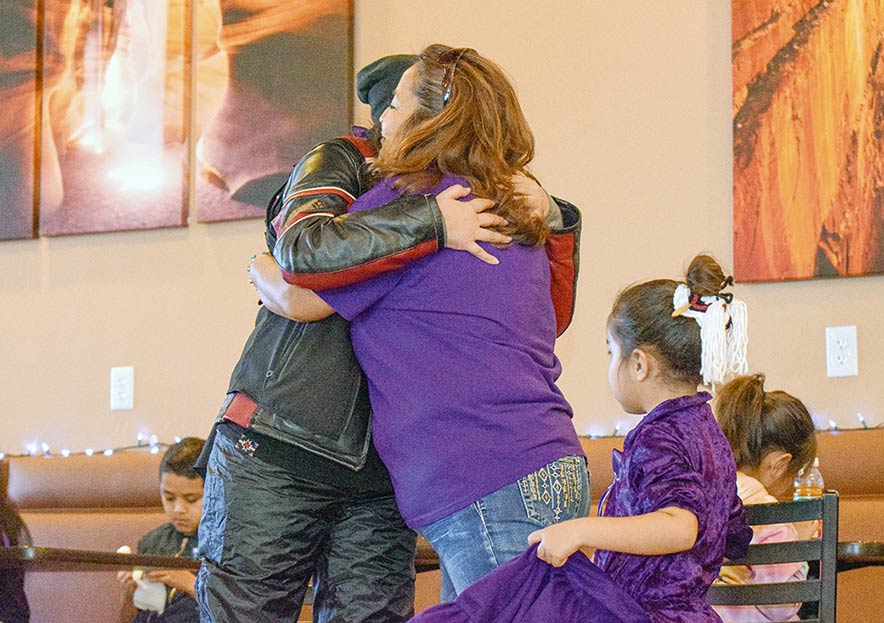 Special to the Times | Krista Allen
Lavinia “Luvy” Yonnie from Phoenix embraces Treva Walker, aunt and mother of the late Amanda Dakota Webster, after a motorcycle ride in memory of Amanda on Dec. 14. Walker and her family welcomed the riders to the Blue Canyon Grill in Cameron, Ariz.

Family members and loved ones of the late Amanda Dakota Webster on Saturday morning gathered under cloudy skies outside the Blue Canyon Grill to honor her memory by greeting a motorcade.

It has been more than a year since Amanda’s murder and her family said they are still coping with grief and emotional pain. Her maternal grandmother, Isabelle Webster, said she feels her granddaughter’s absence in her home acutely.

Amanda was found dead inside a hotel room at Home2 Suites in Florence, Kentucky, on Dec. 1, 2018.

Police responded after housekeeping found an unresponsive woman inside room rented by Jesse A. James, now 33. Police found the woman, later identified as Webster, was deceased.

James was arrested at Rave Cinemas inside Florence Mall later that day after movie-theater employees called police because a customer was acting paranoid and strangely.

The man gave police two fake names before they determined that it was James and then arrested him for false identifying information and identity theft.

Under police questioning at the city police department, James admitted to stabbing and killing Amanda inside his hotel room at Home2 Suites, where she, along with her best friend and sister Keevana Dan, from Leupp, Arizona, was staying while working for GE Power in Erlanger, about 4.4 miles away.

James had been freed from Kentucky prison system custody two days before Webster’s death, according to court records provided by Lance Soto, chairman of the American Indian Movement Chapter of Indiana and Kentucky, a Native American advocacy group.

James had received mental health treatment last year for a felony methamphetamine possession conviction. He was in custody from July until his release in early September. He was put back in jail the following month for a Northern Kentucky Mental Health Court violation. James was released in late November.

James pleaded not guilty Feb. 6 in Boone County Circuit Court to a murder charge in the killing of Amanda. Court Judge Richard A. Brueggemann recently ruled that James is competent to stand trial. But no trial date has been set yet. A pretrial conference is scheduled for Jan. 22, 2020, at 9 a.m.

She was born Christmas Eve 1991 to the late Ida Webster, said Isabelle in an interview with the Navajo Times on Saturday. Ida was Isabelle’s daughter.

Amanda was Ida’s first-born child. Amanda also has two younger brothers, both of who live with Isabelle. Amanda’s eldest son, an 11-year-old, also lives with Isabelle.

“It’s been hard losing my granddaughter,” Isabelle, 69, said. “I had to deal with a lot of new ways and new things to take care of my great-grandson again.

“I guess when you get older, you forget a lot of things,” she said. “(Raising your great grandson) is not like the way you would raise your own kids. It’s way different.

“When I feel that I’m upset, I just take off to Flagstaff, Tuba City – wherever I can meet friends and talk with them,” she said. “It’s just trying to find ways from keeping myself from going down into depression.”
Amanda’s aunt and mother, Treva Walker, said even though it’s hard to deal with the significant loss of her daughter, the Webster and Walker families have to keep moving forward.

“I just got to be strong for my family and be there for her kids, my grandboys,” Treva said. “My aunt, she’s having a hard time. My sisters are all having a hard time. But I’m one of the eldest that has to keep it going. The only thing I can do is just keep her memory going.”

Growing up with Amanda

Amanda grew up with Keevana Dan since their sophomore year at Coconino High in Flagstaff.

“We grew up together and we stayed together throughout high school,” Dan told the Times last December. “We finished school together. We were basically joined at the hip and we never separated.
“She had her first child in high school and I was there for her,” she said. “Then I had my child and she was there for me. When I got married, she was there. Everything that we’ve done, she was there.”

She added, “All our milestones, every step we took.”

Amanda and Keevana both were in the mechanical construction industry and had been traveling together across the country since 2014.

Keevana describes her best friend as a “really good person,” independent and funny, and a woman who did everything to provide for her three children.

“She was a fighter,” Keevana said.

Isabelle said she was really close to Amanda. She’s also very close to her grandchildren, Ida’s two sons, so coping with grief is really hard.

“My great-grandson goes to school. You have to find ways to help him when he’s down,” Isabelle said. “And he’s forever asking about his mom. He (often) says, ‘She promised me she’ll be back on Christmas Day.’ That’s what he says.”

Isabelle said she’s currently in the process of renovating her great grandson’s room inside her home, but the only problem is obtaining funds to do it.

“We’re renovating his room and he needs a closet, a bed, sheets,” she said. “That’s the kind of help I need for him. I got a little bit of help from (Cameron Chapter). One piece of board is around $14 (average is around $15 to $30 per square foot).”

In memory of Amanda

Amanda’s family and friends waited for the memorial motorcade outside Blue Canyon Grill on Saturday morning. Many wore purple or pinned on a purple ribbon — the color of domestic violence awareness — in memory of Amanda.

When the motorcade arrived, the motorcyclists revved their engines for Amanda and to honor her family.

The motorcyclists included Tarah Weeks and her daughter, both of Page, Arizona, Lavinia “Luvy” Yonnie from Phoenix and Shelly Denny, Ojibwe, from northern Minnesota.

“Coming together like this does help,” Treva told the motorcyclists. “It means a lot. I have you guys as a support because sometimes you think you’re by yourself.”

Yonnie said when she first heard about Amanda, she began following the story because it really hit her.

Yonnie said she helped organize a “Medicine Wheel Ride” over the summer that ran from Canada to New York to Mexico, and then back up to Topeka, Kansas.

“Wherever we could reach our Native people, we reached out to them,” she said of the ride, during which she tied Amanda’s name on a ribbon in her memory.

“There were so many of them (people along the route) that were touched because we thought our daughter, our mother, our aunt, our sisters were forgotten,” she said.

Yonnie on Saturday gave that ribbon with Amanda’s name on it to Treva and her family.

“This is my heart,” Yonnie told the Webster and the Walker families. “Your families are in my prayers.”

Tara Weeks said Amanda’s story affects her so much that she worries about the safety of all Native women. She is currently working on putting together a self-defense seminar in Page.

She said she obtained a venue at Ken’s Tours in LeChee, Arizona, and a professional instructor, Larry Stevenson of Whitesboro, Texas.

here are some ladies still missing out there. Some are still around – they just need to be found. The thing that happened with Amanda is hard, but … nothing’s going to bring her back.”