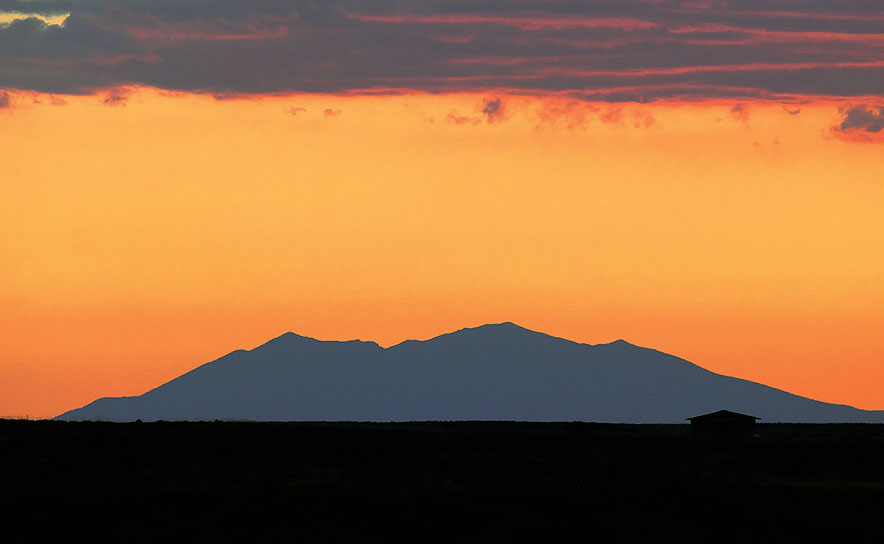 When Asdząą Nádleehé was living among the Diné, she told them to inhabit the footsteps she left on the land. And then she left, leaving behind her traditional living and cultural ways.

But she took with her a lot of songs and prayers, said Leland Grass, vice president of the Diné Medicine Men Association, Inc. The songs and prayers she did leave behind, she told the people to use. Since then, the mountains, rivers, canyons and the environment, among others across the world, diverged into disorder.

“How do you settle those kinds of things that are out of our reach?” Grass asks. “How do you take care of that?”

Members of the medicine association said Asdzą́ą́ Nádleehé has said there is a remedy for this kind of disorder, which happened once before.

“Back then, the animals spoke to one another too,” Grass said. “The people spoke to the animals, which told them that there is a plant out there that can actually heal this raging nature. The people (followed the animals) and looked in on each plant.”

The people saw that each of the plants shook like a leaf, so they asked Dǫ́’iitsoh – one of the Ha’aznání Dine’é who worked with Níłch’i from the four directions – about the plant.

Dǫ́’iitsoh and Níłch’i whispered to the people, “Find the plant that does not tremble.”

And sure enough, the people found that plant and took it home for smoking tobacco.

When Dǫ́’iitsoh settled the chaos, he left the people with songs and prayers, which are still being used today, according to the association.

“Now, going back to the plants that shook, one of those plants was the San Francisco Peaks Ragwort, which can do a number of (violent) things,” Grass said. “It’s not good to desecrate that (plant).”

The Ragwort in general is called Ch’ilbilátahaltsoi. The medicine men and women call it Ch’ilaghání in public.

Members of the association said the Ragwort, or the groundsel, has four different names, all of which are used only by hataałii and ‘azee’ bee nahagha in the ceremony.

Members of the association, along with members of the Diné Hataałii Association and the ‘Azee’ Bee Nahagha of Diné Nation, on Dec. 5 raised objections to the desecration of the San Francisco Peaks Ragwort, the Ch’ilaghání, after the U.S. Forest Service found that Arizona Snowbowl’s request to replace its Agassiz Chairlift would cause no significant impact to the agency’s values.

The Agassiz Chairlift at the Arizona Snowbowl on Dook’o’oosłííd is more than 30 years old and runs 10 months per year, carrying over 1,200 people per hour up the western side of the mountain, taking visitors up to 11,500 feet.

Ski resort officials last year proposed to the Forest Service for environmental approval saying that if the proposal is approved, construction would begin on a new high-speed lift.

He said Laura Jo West, supervisor for Coconino National Forest, has not approved the replacement yet. The environmental assessment is a decision-making process following National Environmental Policy Act regulations, he said.

The Forest Service in October issued a draft decision notice – finding no significant impact. Murray said a final review is not anticipated until early next year.

The EA, West said, analyzed several proposed activities required for the replacement of the Agassiz chairlift, including tree removal to expand the existing chairlift corridor, terrain grading for the top and bottom terminals, construction of a storage building at the bottom terminal, a construction access road, two foundations, and power supply.

The Agassiz Chairlift was installed in 1985 and it is nearing the end of its expected operational life and will need replacement, said Murray.

“The replacement of the Agassiz (chairlift) is not a gondola – it is a combination lift: six-person chairs with passenger cabins intermittently spaced between chairs,” Murray explained.

“The purpose of the cabins is primarily for summer operations to provide guests with comfortable ride to the top and back down during rain, hail, or cold,” he said. “Approximately 40,000 guests ride the Agassiz lift in the summer.

“If it is cold, windy, or a monsoon rolls in, the guests are on the open chairs and subject to the weather elements,” he said. “They often arrive at the bottom soaking wet.”

Murray said the cabins are Americans with Disabilities Act compliant and it is great for elders and children.

“The existing lift replaced a lift in the same location that was installed in 1961,” Murray said. “So, there has been a lift in this location for 59 years!”

West stated in the draft decision notice that coupled with ongoing improvements the ski resort is making to its current summer program, there is an opportunity to benefit both the summer and the winter seasons through the introduction of the new lift technology.

After thoroughly considering the proposed action and the no-action alternative, the analysis presented in the EA, as well as public comments that the Forest Service received, West said she has decided to select the “proposed action” from the EA, which meets the project purpose and need and it is consistent with the forest plan.

The proposed action will amend Snowbowl’s existing special use permit to authorize the replacement chairlift facilities, construction and to avoid or minimize affects.

The existing chairlift will be replaced and upgraded with a detachable combination chairlift and gondola referred to as a “chondola” or “telemix,” which would carry passengers at a comfortable speed of 150 to 200 feet per minute.

Ch’ilaghání, or Packera franciscana scientifically, is endemic to the tree line and alpine habitats of Dook’o’oosłííd, according to the Arizona Native Plant Society.

In 1983, the U.S. Fish and Wildlife Service listed the plant as threatened (due to its narrow geographic distribution, apparent habitat specificity, and concerns over recreational impacts) and in 1987 developed a recovery plan urging better management of the ecosystem as well as further monitoring.

Species abundance data are limited in scope, yet they are critical for recovery of the species, especially in light of predictions of its future extinction due to climate change, according to the U.S. Forest Service’s Rocky Mountain Research Station in Flagstaff.

Ch’ilaghání predominately inhabits loose talus slopes. There is little habitat available for the plant to migrate upward in a warming climate. Four other Packera taxa primarily grow in alpine-subalpine talus habitats in western America and two of those, Packera musiniensis and Packera malmstenii, are also of conservation concern.

“That’s their (Tooh Dine’é) point of view in how they’ve studied those things on their end,” Grass said. “They’ve probably been studying all those things over there, but that plant – the Ch’ilaghání – might get affected when they (replace) their chairlift.

“And they’re (Snowbowl and Forest Service) are putting this on the public view,” he said. “The public has a shot of what they want to say on it.

“But why is it only this particular plant?” he asked. “Why aren’t there others they are addressing? Why is just only the Ragwort? Why? They have already desecrated and damaged that (Dook’o’oosłííd)? That’s where we came in a did a comment.”

In a joint statement to the Navajo Times, medicine men’s association, Diné Hataałii Association, and ‘Azee’ Bee Nahagha of Diné Nation stated that nothing has changed and that Diné rights continue to be violated and that the Creator’s creation continues to be destroyed.

“This project must be withdrawn, and Coconino National Forest’s decision revised,” their statement reads. “Arizona Snowbowl does not want to protect the sacred plant (San Francisco Peaks Ragwort) so their special use permit must be revoked and terminated for the greater public good.”

In an August letter written to West and Regional Forester Calvin Joyner, the association wrote that they are continually discriminated against by federal agencies as they require them “to reply in black and white,” a foreign language that is not their own and that does not convey the fullness of their concerns.

“We have spoken their language but they’re not speaking our language,” Grass said. “They (Tooh Dine’é) don’t know how to use our things, our culture. They don’t know anything about our way of life, our traditional practices and why the Holy People have brought us here.

“Those sacred mountains are brought to us by the Holy People,” he said. “And those stories are in our medicine bundles and they lead us … in the future … in good harmony.”

So, would the San Francisco Peaks Ragwort be destroyed during the replacement chairlift project? Murray said the short answer is no.

Murray said the Snowbowl team knows the San Francisco Peaks Ragwort relies on summer monsoon rain to “pop up” during the summer.

“In the late 1980s, Snowbowl and the Coconino National Forest began restricting hiking access above the Agassiz Chairlift in the summer,” Murray said. “This was for the plant and accommodate requests from local tribes to keep hikers off the uppermost areas of the San Francisco Peaks.”

Murray said summer guests are restricted to an area at the top of the lift and short hiking trails to an observation area above the lift.

“The San Francisco Peaks Ragwort has grown in population and is doing well,” he added. “In fact, we know the plant enjoys ground disturbance as we have seen it propagate into some areas after some construction. Snowbowl also provides interpretive education to our summer guests on a wide range of topics, including the (San Francisco Peaks) Ragwort.”