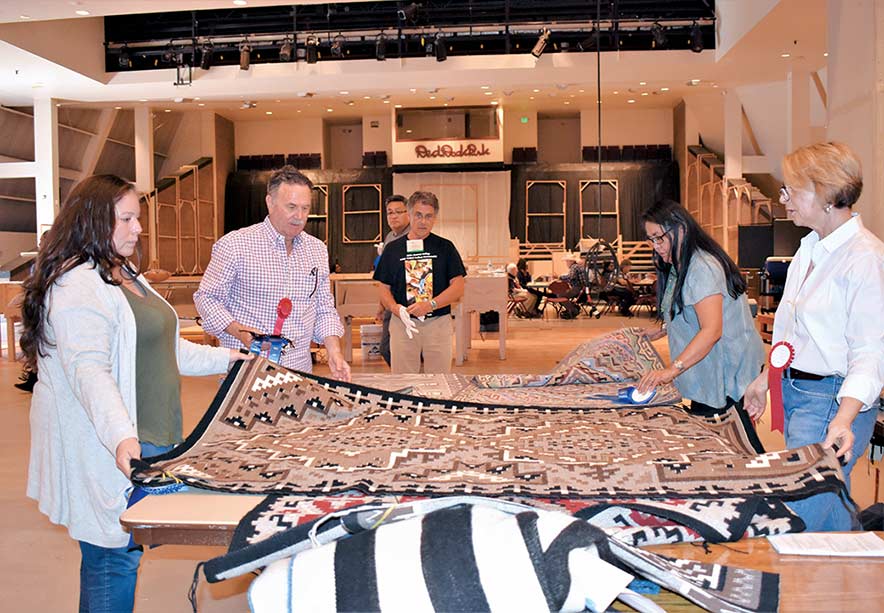 This year’s beloved Gallup Inter-tribal Indian Ceremonial at Red Rock Park is going to happen, but without financial support from the state of New Mexico.

Sound confusing? It is.

Due to the COVID-19 pandemic, the state Ceremonial office, under the umbrella of the New Mexico Tourism Department, will be hosting a virtual “Spirit of the Ceremonial” one-hour documentary on KOB-TV Albuquerque (Aug. 19, 9 p.m.), a virtual “artisans market,” and the annual Ceremonial queen pageant at the El Morro Theater in Gallup.

Separately, the local Ceremonial association is forging ahead with the traditional live event that has been occurring annually since 1922 even though the state has pulled funding, which has in the past amounted to around $80,000 per year, said association board member and event coordinator Dudley Byerley.

“This year we don’t have that money, so we’re just doing what we can with what we’ve got,” he said.

The Ceremonial fine arts exhibition, opening night wine tasting/gala, rodeo and Native American night dances will still be held at Red Rock Park as usual, but as of yet the popular parade, powwow and song and dance are not on the schedule due to the shortfall in funding.

Byerley said while the state and local groups worked together in prior years, something has changed this year and every offer the association made to work with the state was turned down.

“They’re doing their own thing as the state Ceremonial office and ours is the original group, the Gallup Inter-tribal Indian Ceremonial Association,” he said. “They don’t want to have nothing to do with us. They’ve got their own deal, and we’ve got ours.”

“I don’t know what they’re thinking,” said association board Vice President Hilda Bowman. “They pulled our funding from us.

“We give our heart and soul to this event,” she said, “promoting Gallup and the traditional ways of Native Americans and the artists.”

Bowman said the state has tried to come in and take over the Ceremonial in the past but has never been successful.

“For a year and a half, we’ve tried to be a partner with them, but we got no answers or cooperation,” she said.

The association, a 501c3, is the outgrowth of the local group that has been running the Gallup Ceremonial since its inception, said Byerley.

He explained that in 2019 when he was board president, the association was awarded $167,000 by the state to help put on Ceremonial and build towards its centennial. Plus, there was another $50,000 allocated to hire a full-time director to help prepare for the hundredth anniversary.

“They saw that money so they took it over,” said Byerley. “They kicked us out of the office. They still owe us money. It’s a sore spot with us.

“They say they work with the local association,” he said, “but in my mind now, I don’t think they had any intention of working with us. It was just a complete hostile takeover.”

Reached by phone, Sanchez, Acoma/Laguna, a seasoned Native American event producer, said that she made every effort to reach out and work with the association after she was hired last September and Tourism Department leadership had been engaged with them prior.

“Regarding not answering questions, the door has always been open,” said Sanchez. “It has always been my objective, and still is, that we all collaborate and work together. But more often than not, assumptions were made rather than phone calls.”

She said that in January, the Ceremonial office decided to move forward with a virtual event due to the COVID-19 pandemic’s effect on planning as well as ongoing safety concerns.

“There has to be consideration for public safety and the tribes,” she said. “We all have to err on the side of caution because of the elders, and now the children, the culture and language. We’re not out of the woods yet. There are still people getting infected, regardless of the vaccine.”

She disagreed that the state owes the association money and clarified per the Intertribal Ceremonial Act statute that the $165,000 was appropriated for the 2020 (canceled) event and went into the state Ceremonial office account and is being used to fulfill its obligation, by law, to produce the (virtual) event in 2021.

Sanchez also clarified that the downtown Gallup Ceremonial office is closed because it is undergoing repairs. She said the goal is to reopen it sometime in August, but no date has been set yet.

“It’s taking a while and construction people are in high demand,” she said. “It’s a matter of making sure the building is safe.”

In the meantime, Sanchez is still teleworking, she said. She earns a salary of $65,000 as Intertribal Ceremonial office director.

Current association board President Kyle Tom, who is also the volunteer rodeo coordinator, said with little time to plan the Gallup Inter-Tribal Ceremonial to begin with, the state’s pulling out in early April has been unfortunate.

“It’s mind-boggling,” he said. “We were trying to get to the point where they would produce part of it with the virtual, and we produce live elements. We had sent off a proposal and it was rejected.”

Now all correspondence is being handled through each party’s legal counsel, he said.

Sanchez said for that reason she could not share why the association’s proposal was rejected due to “attorney-client” privilege.

Tom said, “Unfortunately, we couldn’t come to an agreement and tell the world, ‘Hey, this is one Ceremonial event, we’re working hand in hand to bring you the best Ceremonial we could coming out of the pandemic.”

Tom said he feels especially bad for the public and Ceremonial participants like the artisans because they are confused about what is going on with the two Ceremonial entities and dueling events.

Even some sponsors have been confused, he said, and a couple of them donated to the state’s virtual Ceremonial when they thought they were contributing to the associations’ live Ceremonial.

“I know our queen was working with their organization,” he said. “I think she might have been under the impression we were a unified front in terms of our board and their board presenting one Ceremonial.”

Since the split, Byerley, credited for helping to revive Ceremonial and quadrupling attendance through 2019 under his leadership, is now working tirelessly to help shore up sponsorship monies to make up for the loss of funds from the state and delays due to the pandemic.

“We’ve only had about five weeks to put this thing together, get the sponsorship money and line things up, so it’s been nuts,” said Byerley.

Fortunately, so far, this year’s fundraising efforts have exceeded expectations, he said, and some sponsors have upped their donations from prior years.

McKinley County also came to the rescue with $115,000, he said, to help ensure the in-person Ceremonial can go on.

“McKinley County really stepped up to help us,” said Byerley. “This year, with our fight with the state and the state trying to take it over, this Ceremonial will be a hundred percent local.”

Tom said McKinley County leadership really wanted to see the local event happen and views supporting it as an investment in the community.

“They understand it for what it is – a local treasure,” said Tom.

“If it wasn’t for the county commissioners and the city of Gallup, I don’t think this thing would have been a go for us this year,” said Bowman.

Gallup Councilor Fran Palochak said Gallup is also only charging half of the normal rate for use of Red Rock Park and is donating $200,000 worth of city worker in-kind services to support the association’s event, including park maintenance and clean-up.

Still, Byerley said the association is looking for sponsors to fund the parade, powwow and song and dance, and is also hoping a couple of organizations will step up to help boost gate revenues by sponsoring a free admission day.

Tom said he is hoping the Navajo Nation government might be willing to pitch in with sponsorships and donations and has already reached out to several departments seeking to enlist support.

Palochak said the situation with the state is complicated because in the statute it says the state Tourism Department should be staffing the Ceremonial.

“It’s difficult for me to say what occurred,” she said. “I’m not involved in that, so I don’t really know.

“All I can say is that I’m glad that the vision of the Ceremonial continues on and that they’re having some of the events that the local board is putting on and the state is also doing something a little later, by television, simply because the state was not reopened in time to do all the planning that was necessary,” she said.

Sanchez believes that the Ceremonial documentary, produced by herself, KOB-TV and Edit House Productions for $60,000, will be an asset because it will reach a wide audience and can generate interest for people to attend the 2022 Ceremonial Centennial.

“This is a milestone in Ceremonial’s history because there are very few documentaries about Ceremonial,” she said. “If we look at it as an evolution as we head into modern times, especially post-pandemic times, the TV show is now another great component of the Ceremonial programming.”

Palochak said the event has always been a part of her life and she’s glad to see everyone working towards keeping the Ceremonial culture alive.

“I hope the two organizations can bridge their differences for the 100th Ceremonial, because it’s very special to us,” she said.

Gallup Mayor Louis Bonaguidi agreed, saying that he hopes the state and the local association can make amends heading into the Centennial event in 2022 and avoid this year’s events in order make it the best possible celebration for all involved.

He said with the traditional Gallup Inter-tribal Indian Ceremonial running $400,000 to $500,000 a year, it really needs and deserves the state’s support, especially since it is such an important economic, cultural, and tourism engine for the region.

Sanchez said she thinks it’s “everybody’s hope” that conversations between the two groups can continue after the conclusion of this year’s events.

“Right now, the focus needs to be on the events, because, as a producer, I want both to be successful,” she said.

She agreed that combining resources could reinforce not only the production of the event but also to evolve the reach, programming and roots that Ceremonial was founded on – community and a celebration of Native American culture.

Meanwhile, Tom said despite the awkward circumstances this year, his team is taking the reins and working dawn to dusk to make this year’s live Gallup Inter-tribal Indian Ceremonial a success.

“We are charging forward, and we have such an amazing community behind us,” said Tom. “The sponsorship support, the spectator participation, contestant participation that’s anticipated is just mind-blowing.”

For the time being, the association has moved into an office at 2105 Aztec Street.

“We’re just going on as the association,” said Byerley. “We’re going to do everything we can with what we’ve got to work with. That’s what our community deserves.”