From his home in the San Francisco Bay area, Diné molecular biology professor Wilfred Denetclaw has followed the statistics on the spread of the coronavirus on the Navajo Nation with increasing alarm. 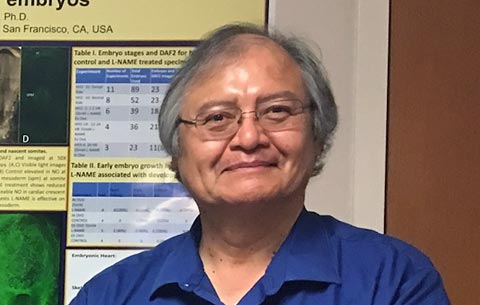 “I’m not a virologist,” Denetclaw said, “but being a biologist I know a little about how infections behave. And the news from Navajo is very alarming to me.”

Left to its own devices, Denetclaw explained, an infectious agent like a virus will double its hosts every few days as every host passes it to at least one other being — that’s what’s called an exponential growth curve. And that’s exactly what the figures on the reservation look like when you plot them out.

“This shows me the virus is out of control,” said Denetclaw, 60, who hails from Shiprock. When he compared the New Mexico data by county, he encountered vast disparities.

“When you look at, for example, Doña Ana County, which has a similar population distribution to San Juan County (where Shiprock is located), you see they both started out with about 16 cases,” he said. “Three weeks later, Doña Ana had 39 and San Juan had 116. “That tells me that social distancing is working in some places and not others,” he said. “There’s an indication that public health is not being heeded on the reservation.”

Why should that be the case? “There’s lots of room to speculate,” Denetclaw shrugged. “Maybe our education system is not good enough to allow people to understand things like this. Maybe people have to go to hot spots like Albuquerque to buy what they need, and then they bring the virus back.” Denetclaw said from what he’s read, President Jonathan Nez and the Indian Health Service are doing their best to get the word out on social distancing, but it may be too late.

He used the example of California vs. New York to highlight the importance of early intervention. “Our governor (Gavin) Newsom made it clear right away how bad this thing is,” he recalled. “He shut down all mass gatherings. My university (San Francisco State) has had nothing but online classes for over a month now. We’re required to wear masks and gloves any time we go outside. At the grocery store, the clerks wipe off those conveyor belt things between every customer.

Denetclaw, who is Hooghanlani born for ’Áshiihí, said he was appalled to learn from his sister in Shiprock that the drive-through restaurants on the reservation are still open and have long lines.

“I wouldn’t want a stranger cooking my food right now,” he said. “You have no idea when they last washed their hands.” Denetclaw was also alarmed at the death rate on Navajo, which at 3.4 percent is almost twice as high as the average for the rest of the world.

“Again, all I can do is speculate,” he said. “This virus kills quickly. Maybe people just aren’t getting to the hospital fast enough. Or maybe the hospitals are so full that they’re sending people home who really should be hospitalized.” However, he said, he expects that rate to go down.

“When hantavirus first appeared on the reservation in 1993, it had a 35 percent fatality rate,” he noted. “As doctors learned how to handle it, that came down.” Would better science education save lives? Denetclaw doesn’t know about that, but maybe it would cut down on the spread of conspiracy theories.

For instance, the idea that COVID-19 is a man-made bioweapon. “They know the genetic sequence of this virus,” he pointed out. “It’s a SARS (severe acute respiratory syndrome) virus similar to the one that was giving us problems in 2003, with some mutation to the spikes that allow it to attach to human lung tissue and make it more aggressive.

“If it were an engineered bioweapon, you would see abrupt changes in the gene sequence where someone had mixed and matched other genes,” he said. “There’s nothing in this virus to suggest any unnatural mutations.”

As for the idea that the 5G network is messing with our immunity, Denetclaw said he hasn’t paid much attention to those threads, but “until there is a series of well designed, peer-reviewed experiments, I wouldn’t believe all the things people are posting about on social media. Science is wonderfully self-correcting.”

So what is Denetclaw doing to flatten the curve? “Everything the state health department and the CDC suggest,” he said. “My wife and I have been home for a month now. We’re pleasantly surprised by all the things we’ve found to do and how well we get along after 40 years of marriage.”

His advice for his Diné relatives? “Stay home. You might surprise yourself.”