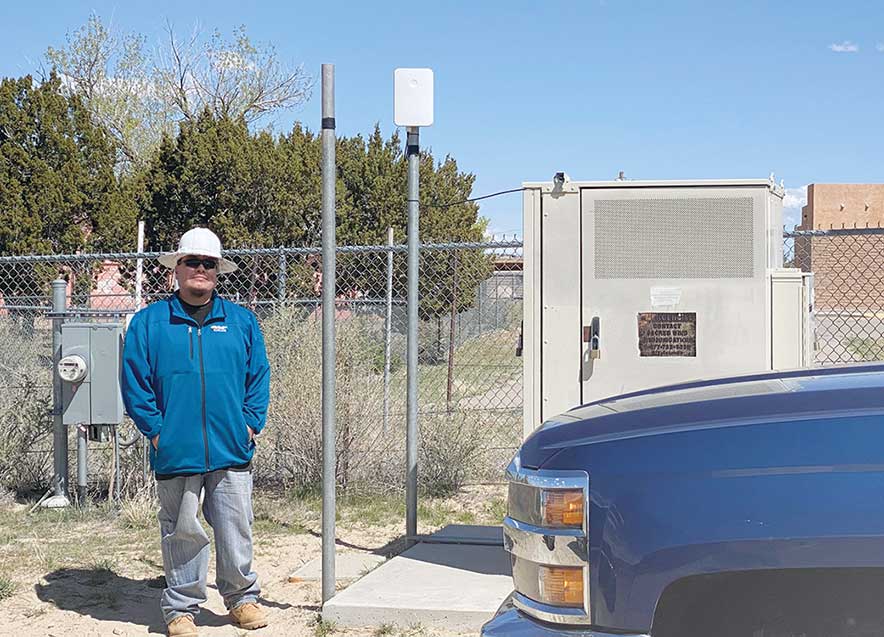 The small, white box bolted onto the top of a metal pole near the To’hajiilee senior center is easy to overlook but is drawing lots of attention.

When wireless connectors in the box were turned on recently, a 300-feet area around the center turned into a Wi-Fi hotspot. To’hajiilee is a satellite community 30 miles west of Albuquerque with around 3,000 residents. Chapter Vice President Jacqueline Platero said access to the internet is needed more than ever.

The community recently reported its first coronavirus case, a person who traveled to Gallup before the state-ordered lockdown began last weekend. Platero, who is also chair of the community health board, said the local clinic’s priority is to contain the deadly virus.

Chapter officials are reminding the community to stay home and internet service through the hotspot will help. “This has the capability of getting information to our community on how to stay safe and avoid risks,” said Platero. She said she’s alarmed and saddened every time she checks the Navajo Nation Department of Health website.

As of May 2, there were 2,373 positive cases and 73 deaths. Platero said the hotspot also helps students who can utilize laptops provided by the school before it closed due to the pandemic. Each laptop is loaded with Zoom, a popular videoconferencing app. “For the (students), it’s exciting for them to see their teacher through the computer,” she said.

At Nageezi, a similar hotspot is located near the chapter house. “We have an average of 30 people a day,” said chapter coordinator Danny Simpson. A password isn’t required. Nageezi, located 40 miles south of Bloomfield, has a population around 1,500. “This hotspot is very beneficial to the community,” Simpson said. “Students, moms and dads are using it. Just before you called, I saw an elder driving away.”

Simpson said students need the wireless connection for at-home studies and parents and grandparents need it for shopping, banking, filing taxes and updating information for programs like Women, Infant and Children, unemployment, and checking the irs.gov site for their stimulus checks. “Anything right now has to be done online,” Simpson said. “If Navajo people don’t have internet services, they are just basically not going to get help.”

To’hajiilee and Nageezi are two of six free hotspots made possible by Sacred Wind Communications, a New Mexico telecom company. The company was founded by the late Gil Arviso, Diné, and his long-time friend and colleague, John Badal, the current CEO. Sacred Wind set up the Wi-Fi sites as part of the Federal Communication Commission’s challenge to extend broadband services to communities that lack service during the pandemic.

“Less than 60% of Navajo homes in some areas of New Mexico have access to basic phone service and fewer still have access to broadband services,” noted Badal. Catherine Nicolaou said the company began working with chapters that had the small white boxes with the required technology – a fiber-filled digital loop carrier. In addition to To’hajiilee and Nageezi, hotspots are at Red Rock Chapter, Iyanbito Senior Center, Upper Fruitland Chapter’s Ojo Amarillo NHA parking lot and Huerfano Chapter’s NAPI-NHA parking lot.

At Red Rock, a community of 1,300 located a few miles south of Gallup, account maintenance specialist Leatricia Nelson said more people would use the hotspot but many don’t know about it. Nelson said the chapter took down its Facebook page.

“There were too many negative comments,” she explained. Now it’s been hard to get the word out about the hotspot and other information like the student meal program provided by Gallup-McKinley County Schools, she said. (The bus with meals arrives around 10:15 a.m. Monday though Friday.) “I only see around 10 cars,” said Nelson.

Nicolaou said she would help spread the word about the hotspots. “Our whole mission is to the serve the people,” she said. “It’s an honor to do what we do.” Sacred Wind has grown from the two founders to 47 employees – 67% who are Navajo – serving 22 chapters. According to a company notice, the hotspots are available from 5 a.m. to 7 p.m. Monday through Friday. They shut down over the weekend due to the Navajo Nation’s curfew.