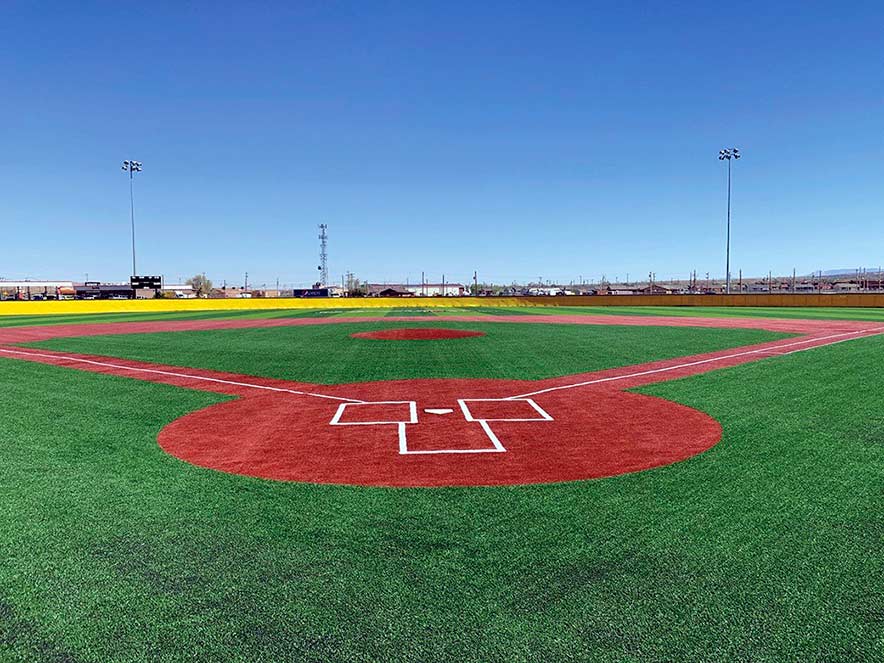 Navajo Times | Cindy Yurth
The new baseball field at Chinle High was fitted with a new turf that helps mitigate ball bounces. In addition to the new turf, a concrete dugout and a new batting cages were installed. The upgrade was part of a $6.5 million facelift, which includes renovation to the football and softball fields.

The original chain link fence inside the baseball and softball fields has been replaced with a concrete dugout.

It now has a covered top.

That redesign is part of $6.5 million makeover at Chinle High’s athletic facilities, which is near completion.

In addition to overhauling its baseball and softball fields, the school administrators have also made renovations to the football field, which houses the oval track.

“This is the second time we’ve upgraded our fields,” Chinle Unified School District Superintendent Quincy Natay said, while noting the last time they made renovations was about 13 years ago.

Natay said they awarded the contract last July and the project was started last fall. Natay spoke of the benefits of the new playing surfaces being used at the Chinle campus.

“The technology has changed with the turf so we’ve installed the latest turf that is available,” he said. “This is all new technology. With the older turfs you experienced a lot of ball bounces but we’re able to mitigate that with new technology and newer designs.”

That concept, Natay said, was lifted from Grand Canyon University, a facility the Chinle superintendent visited in determining what artificial turf to use.

“I toured their facilities and we installed the same turf system they use for our baseball field,” he said.

The new amenities at the baseball field include a new batting cage that uses netting instead of a chain link fence, and bleachers surrounding each field.

Both administrators said the upgrades were needed as the old turf outlived its life expectancy of 10 years.

“We definitely needed to do this,” Martin said. “We needed to improve our facilities for our students and community. I just want to give a big shout-out to our superintendent for making these things happen.”

With the new layouts, Natay said they were able to incorporate the Wildcat logo onto each of their fields.

“We have our logos in the center and we’ve added some color to the end zones on our football field,” he said.

And with an upgrade to the new track, Natay said they have the means to host a track meet in the future.

Natay said the concourse surrounding the football field is now covered with concrete. Before it was covered with asphalt.

The school district also upgraded the lighting system at the football field, as it is equipped with LED lighting.

“The lighting has been there since 1989 when the school was first built,” Natay said. “We’re replacing it with new technology that has more energy-efficient lighting. It’s going to be nice when it’s all said and done.”

Even with the renovations taking place this past spring, Martin said the school district had planned on hosting some games on its softball and baseball fields.

“We had scheduled some home games,” he said. “Unfortunately for our students, the virus came. They were unable to play on the new fields but we had them in mind when we started this project.”

Like Martin, Natay said he’s feeling for the students, especially for the seniors who didn’t get a chance to complete the regular season.

“I think they would have really enjoyed playing on those new facilities, including the practice areas and batting cages,” he said. “Some of our students weren’t able to finish out their senior year on the baseball, softball and track team.”

With the project scheduled for completion later this month, Martin said the next thing the students and community members can look forward to is the upcoming fall sports season.

“This virus has affected our students and athletes but I’m so proud of the community of Chinle,” he said. “It’s a pleasure to see how our community has come together.

“We just have to wait this out because we’re realizing how much we enjoy the friendly rivalries we have with other schools,” he said. “I think we miss all those competitions because it’s something that we don’t have right now.”