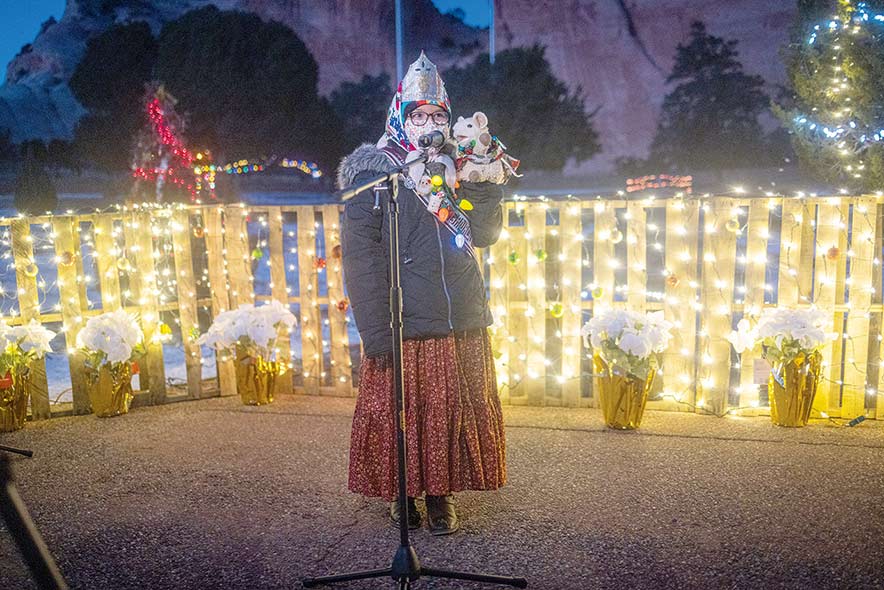 A 10-year-old local princess from Steamboat, Arizona, finds a friend stemming from her imagination, she speaks for her, puppeteering her every move and speaking her words. Through her skill, she entertains countless Navajos at events, gatherings, and nursing homes.

Eriannah Holiday is the 2022-23 Miss Ganado Intermediate for the Ganado Unified School District. “Dumpling Thompson,” – she affectionately named – her sheep puppet is full of energy and communicates in both Navajo and English.

Dumpling sits on Holiday’s hand where she speaks like a person, she lights up the room with her jokes, her festive clothing, and her triumphant spirit. When Holiday speaks for her puppet she speaks with a higher pitched voice, making Dumpling sound like a child.

Holiday emphasizes Dumpling’s speech intricately; she has Dumpling mimic the words she speaks constantly. Dumpling is an attachment to Holiday’s personality that makes her the vibrant, talkative, and full of life.

Dumpling was purchased from Hubbell Trading Post in Ganado, Arizona, according to Holiday. She acquired the puppet after receiving a straight A report card from her school. Dumpling, she added, received her name from the popular Navajo entrée dumpling stew.

She treats Dumpling like her own child, she celebrates her birthday on April 1st, or April Fool’s Day, and even bathes her and puts her to sleep.

Holiday brings her puppet Dumpling everywhere and has shaped an entire personality for the puppet as well as create four clans for her. The sheep is a plush, tan-colored, sheep puppet with a slot to place a hand inside of.

“Dumpling is like her friend whom she dresses up for different occasions, it’s almost like her Barbie doll in a Navajo version,” said Holiday’s mother Ermarena Thompson. “It entertains her audience and wants others to be happy and not to be embarrassed of your traditional ways of being a Diné.”

Thompson says that her daughter wants to influence younger generations to pursue the Diné culture and language.

“It’s like it (the puppet) motivates her in speaking Diné,” said Thompson.

She says she’s “not shy” and is always speaking loudly and confidentially. She dresses in Navajo traditional attire daily; she says that she wishes to respect the intention of Navajo dress and she has inspired some of her classmates to do the same.

Her mother says that it takes 15 to 20 minutes to dress her daughter in the morning. This includes tying her hair into a bun, a colorful skirt, and her sash complete with her badges and title; and lastly, her crown.

Holiday is an only child. The puppet has become her best friend after she lived most of her life without her father Elmer Holiday who passed away when she was 4 years old.

“It really hurts when you (lose) a loved one from Covid or any other illness,” Holiday said. “Because you’re the one that talks to them, they were part of your family and it’s hard to lose a loved one from that.”

Her cheii Bennie Thompson passed away during the pandemic in August 2020. He always inspired Holiday to never stop speaking the Navajo language. He is a major inspiration for her in her leadership role for her school.

When Holiday speaks about her family that has passed on, she speaks with a note of sadness in her voice. She talks about the hopes and dreams that they had for her before her passing, she introduces the important values that they have passed on to her.

Her grandparents are important to her, and she wishes to continue down the road that she believes would have made them proud.

Holiday says that the Navajo language is easier to learn than the English language.

“I started picking up English fast, but when I read it in books, I was like, ‘What is this?’” she said. “It’s easier to learn Navajo, the glottal (and) the quotations.”

Holiday is invested in assisting the elderly as she makes trips to several nursing homes scattered around the Navajo Nation. She says that it is her duty to help them and to continue to speak the Navajo language.

​Holiday enjoys her leadership role and uses it to inspire others to speak the Navajo language and dress in traditional attire, which according to Holiday’s mother is part of her platform.

She enjoys herding her sheep, riding her horses, and feeding her livestock and other animals at her home in Steamboat.

“I’m very honored to have this on my head,” Holiday said. “I’m honored to be a princess and to represent my Ganado Unified School District.”

Holiday continues her reign as princess for the 2022-23 school year and plans to continue her way down the path of Navajo royalty until she reaches her goal of title of Miss Navajo Nation.

The coveted Miss Navajo title is granted to the Navajo woman that illustrates the best of the Navajo culture in a week-long contest during the Navajo Nation Fair every September.

In addition, she continues to refine her speaking of the Navajo language and the education of Diné culture as she takes classes for both. Ilene Naegle hosts a class about Navajo weaving teachings that Holiday attends using the weaving tools she received from her paternal grandparents.