As Diné Bizaad declines among youth, puppets can help 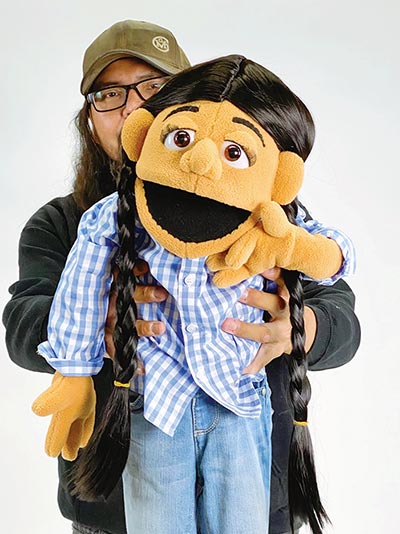 Ash and Sadie are cousins, and the show will highlight Diné culture.

Ash and Sadie, along with four other puppet characters, speak fluent Diné Bizaad as they travel across Diné Bikéyah to show life on Diné land.

Sands created Ash and Sadie with the help of a company – Puppet Mechanics – in Los Angeles.

He said the puppets later would diversify by meeting new people and other puppets from different tribes across the country.

Language loss is a global phenomenon accelerating among Native Americans, according to the Bilingual Research Journal.

Only Native elders speak vernaculars and the remaining are fast approaching the status. And a growing number of children speak only English.

What causes this? And how can this be reversed?

No one may know the real answers to those questions. Perhaps Diné youth today are more interested in worldly things and outside influence than learning Diné Bizaad and Diné culture, said Sands.

“How do we (resolve) this problem?” Sands asks. “You look at our youth today … and that’s what’s happening today. And at home, there’s no real support for language speakers.

“I’m constantly used to kids who speak Navajo, really into learning our traditions, and they would get bullied or they’d get put down by older people,” Sands said.

“That’s so counterproductive,” he said. “We need that encouragement, that support from the elders.

“That’s where the knowledge lies,” he said. “We need to bridge that gap somehow. And I think these Muppets (Ash and Sadie) can do it.”

When a linguist asked Sands what he would do to preserve and teach Diné Bizaad, he said learning should be engaging and entertaining for youngsters to be intrigued.

“I’ve talked to many people on the (Navajo Nation) about language preservation and it seemed like they were trying to do was redundant and it wasn’t working,” Sands said. “Programs weren’t sticking.

“I said it’s got to be entertaining for kids because we have to start from the young age,” he said, “so I said, ‘I would use Muppets.’

“This was two years ago,” he said, “Then COVID hit and put a stop on a lot of things.”

But wanting to start an educational TV show about puppets speaking Diné Bizaad and teaching Diné culture was always on his mind.

Ash would be the protagonist, the main puppet, of “Navajo Highways.”

The host of the show would be Mabel Whitehorse-Martin, a Diné Bizaad and culture teacher from Mussi, Utah, who is advocating for language and cultural revitalization.

She’s better known as the mother of sisters Wakeedah and Dachuneeh Martin.

Sands said he selected Whitehorse-Martin because she helped develop a Diné Bizaad course for Duolingo, a language-learning platform and an educational app with more than 300 million users, through bite-sized lessons.

“And they’re going to be fluent in Navajo – vey interactive,” Sands said of Ash and Sadie. “They’re gonna go around meeting people (old and young alike), learning songs and about our culture.”

Some things Ash and Sadie will learn and teach are tsiitł’óół and tsiiyéél; and talk to Diné who are teaching or explaining the Diné way of life.

“We just barely announced the (‘Navajo Highways’) and we’re aiming to debut the series in January 2022,” Sands said. “And maybe these (puppets) can go to other tribes as well. It’s culture and it’s aimed at the kids.”

Sands said many schools on the Nation are already reaching out to him for a presentation. While the project isn’t doing that now, the Diné puppets will visit the schools in the future.

“I really hope we can do something with it,” Sands said. “I wish I had an answer to why our language is declining. I’m probably not the right person to be doing (this project), but who else is going to do it? I’m trying my best.”

“And that’s a scary thought,” Sands added. “We’ve got to curb it right now and it’s got to start right now.

“We’ve already lost so much (through COVID) that we can’t get back,” he said. “We have to work as hard as we can to keep what we have left, what little we have.

“You can’t have a culture without the language,” he said. “The language is the culture. If we lose our language, the culture basically loses its meaning.”

“Navajo Highways” is set to premiere during the Sundance Film Festival. Sands wants the show to launch on public broadcasting services such as KUED’s PBS Utah.

Whitehorse-Martin was not available for comment at press time.