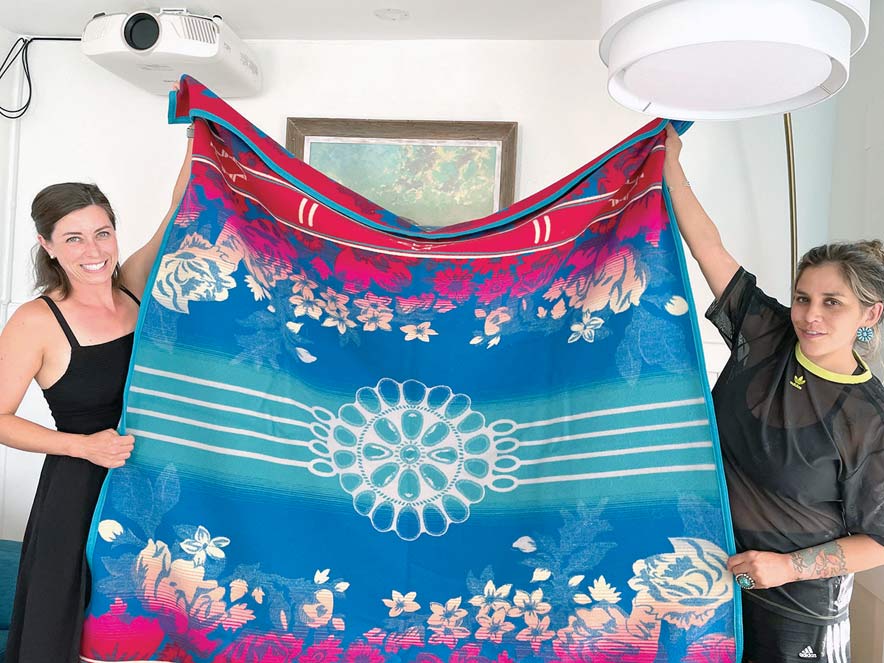 The Pendleton Gather Blanket depicts the Diné culture, traditions, and the strong women in her life.

The blanket comes in only one size, 64 inches by 80 inches, and it’s a woolen fabric, napped and combed for a softer, thicker feel.

And like all the Pendleton blankets, the Gather Blanket – designed by artist Emma Robbins – tells a story.

She resides in Los Angeles, where she’s the executive director of DigDeep’s Navajo Water Project.

This community-managed utility alternative brings hot and cold running water to homes without access to water or sewer lines.

“This is a dream of mine, to work with a company like Pendleton,” Robbins said. “We grew up with Pendleton all around us, and even though (the company) isn’t necessarily traditional, it’s such a big part of our tradition.” 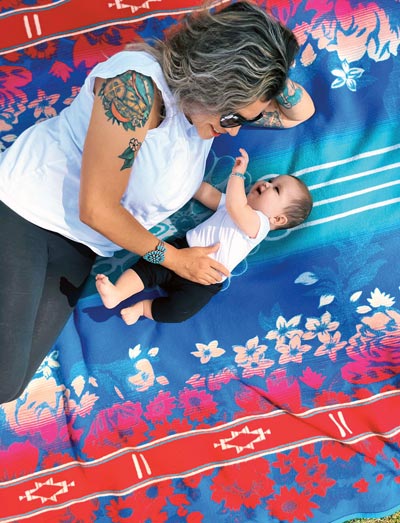 Robbins worked many nights for more than a year to design the Gather Blanket. She wanted it to convey íniłdzil and to be symbolically meaningful in its telling of becoming a Diné woman and how women become matriarchs later in their lives.

The center motif represents a látsíní set with dootł’izhii. Above and below is chǫǫh, rose-print usually seen on women’s ch’ah, crossed by sis łichí’í worn primarily by women, and sometimes used in childbirth.

“I was really thinking about the women in my life at that time because I was pregnant, and we (she and her husband, Aza) knew we were having a daughter,” Robbins said. “I was thinking about my másáni, nálí asdzáá, and their influence on me.

“And then thinking about kinaaldá and the bracelet that I put into the design,” she added. “It was a gift from my family for my kinaaldá. Kind of just incorporating all of those things, really thinking about Diné women when I was doing (designing) it.”

Her inspiration came from her grandmothers, Ann Graff of Chicago, and the late Nora Robbins of Na’ni’á Hasani.

“They’re so different,” Robbins explained. “Coming from a mixed background and always having them so involved in my life, whether it was art or being the matriarchs of the family.

“In my life, in my art, and in my water work, both of them (grandmothers) have played such a big influence,” she added. “Because this blanket is benefitting the Navajo Water Project, it was combining those two worlds into this blanket.”

Robbins said even though her nálí asdzáá passed on 20 years ago, she still plays a big part in her life.

“Just like all grandmothers who take care of the family, she (Nora) was always there to answer questions and to offer teachings,” she said. “She was an artist as well. She wove rugs and made jewelry, and that was something that I always remember being a big part of my life, knowing that I wanted to be an artist.”

Robbins said she’s very close to her maternal grandmother, who she’s seen only once in the past two years because of the pandemic.

“She’s (Ann) always fought for people’s rights,” Robbins explained. “In college, she was kind of a trailblazer in terms of women’s rights. She always looked out for others, and really incorporated a lot of art into my childhood as well.”

Over the past six years, the Navajo Water Project has brought clean, running water to more than 300 Diné households.

The program also connected remote homes with solar power and delivered 13 million gallons of water, sustaining thousands of families and creating jobs throughout the pandemic.

Robbins started as director of the program and worked her way up to executive director over the past six years.

“We are moving away from doing the smaller tank deliveries, the 275-gallon storage tanks, and we’re going back into homes to do the (1,200-gallon system) water systems,” Robbins explained. “We’re taking extreme safety precautions.”

Robbins said her work with the program is something she constantly thinks about in her artwork and how to educate non-Natives that there are people who don’t have running water in this country and some of those people are Diné.

“I always want to convey that in my art,” she said. “When I’m talking to people about the work, I never want us to be seen as, ‘Oh, nobody’s doing anything back home.’ There are a lot of us working hard for our people.

“I want to show how rich our culture is and how much it plays into working toward solutions for our people,” she added.

While she’s fortunate to have grown up with running water and electricity, Robbins said she knows many Diné don’t have that luxury.

“Seeing my grandparents and other family members who didn’t have that, you see the differences, and you realize that everyone should have access to running water,” she said. “You notice the differences when you’re at home, and you’re able to go to the restroom inside and flush the toilet, brush your teeth.

“And then you see your grandparents, and they’re not able to do that or have that option,” she added. “It’s something that’s really impactful.”

Robbins said a representative from Pendleton Woolen Mills in Portland, Oregon, approached her to ask if she’d be interested in designing a blanket.

Hesitant yet astonished, she didn’t think she could do it. To reassure her, the Pendleton representative told her, “You know, a lot of artists just submit any type of work, and we translate it to what a blanket would look like.”

Robbins accepted the offer and decided from the get-go that she wanted to honor the Diné culture and make it personal.

“Work was super intensive at that point because we were doing water deliveries. I was also at the end of the second trimester,” she said. “I was working at night, and it was definitely a nice break from doing the water work during the daytime.

“I worked at my kitchen table. It’s funny because originally, I thought I’d do it on my computer in Photoshop, but I’m not the greatest at Photoshop.”

So, she sketched her design on a piece of paper and cut out pieces manually.

When she sent her final piece to Pendleton, she was afraid she’d get a call from its office asking why she sent her design in that form and not in a digital file.

“But they were super into it,” she said. “And it’s exciting that we’re working with Pendleton because not only is it good to get those proceeds and get them back home to do running water systems, but also spread the word about the project and water issues and solutions that are being implemented by our people.”

Robbins said Pendleton would also translate the Gather Blanket onto a mug.

“I’m really excited,” she added. “Pendleton’s really cool to work with. It’s really surprising to me how collaborative they are and how much they are helpful.”