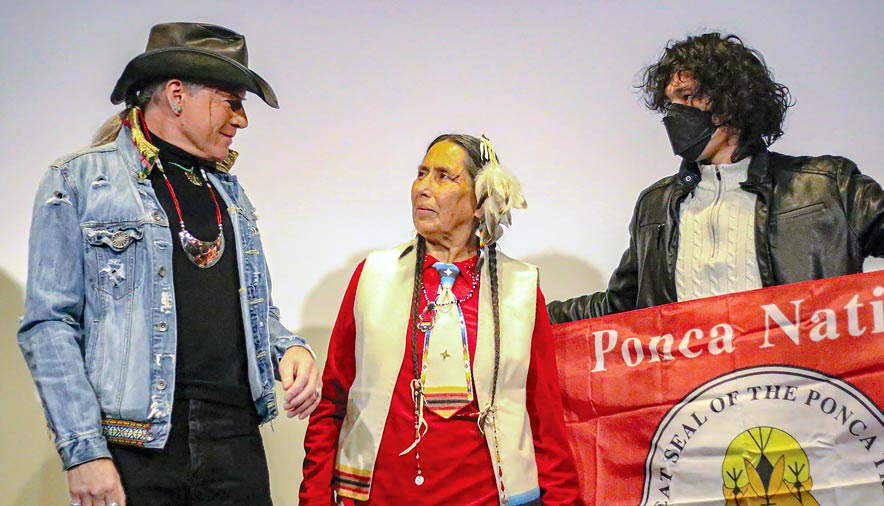 Navajo Times | Cyrus Norcross
Film director Rain Bear Stands Last, who created “Say Her Name” and “Someone’s Daughter,” stands with his aunt, Casey Camp Horninek of the Ponca Tribe, at the end of the show on Feb. 4.

Each takes place in Montana on the Blackfeet Reservation and is about family members losing loved ones and seeking justice.

Rain shared how police jurisdictions are an issue on reservations and how the missing and murdered movement has been around since Christopher Columbus arrived in 1492.

“In Christopher Columbus’s diaries and his letters to his peers, he talks about how you can buy a woman for a 100 castellanos, which is the same price you would pay for land for a farm,” Rain said.

“There were dealers seeking 9- to 10-year-old girls because they are in high demand,” he said, “and for all ages, a good price must be paid, which is a direct quote.

“That is the genesis of the missing and murdered Indigenous girls,” he said. “It’s a tragedy of this hemisphere. That is where it began.”

Rain, or Náhk?xho’óxeóó’?stse (Bear Stands Last), is from the Kalderash, Manouche, and Romanichal tribes. He is also a member of the extended Strange Owl family from Birney and Lame Deer, Montana, on the Northern Cheyenne Reservation.

The chairman looked at Rain and said the tribe would support only him in making the documentary, knowing he is a renowned filmmaker and is not just anyone from outside the Blackfeet Tribe looking to profit off the story.

“He essentially handed me the responsibility of making this documentary, and that’s really how ‘Somebody’s Daughter’ came to be,” Rain said.

The film premiered at the Native American Presidential Forum in January 2022. The movie trended for 10 weeks, and then COVID shut everything down.

As the pandemic shut the world down, Rain received a memo from then Executive Director of UN Women Phumzile Mlambo-Ngcuka.

The UN official asked him if he was aware of the “shadow pandemic,” which was women sheltering in place with their abuser due to the virus.

He was asked if he’d be able to create an updated version of Somebody’s Daughter concerning the shadow pandemic.

“Of course, I said yes, and now the new version of ‘Somebody’s Daughter 1492’ was created,” Rain said.

Rain spoke about how MMIW has impacted every Native nation, ranging from the Long Walk to the Oregon Trail, the California Gold Rush, and Lt. Col. George Custer taking 53 women everywhere he traveled.

Rain compared the economic trade of women to how modern drug cartels run their businesses.

“European traders were successful in their economic endeavors in those times,” he said. “Just like the representatives of drug cartels are successful today.

“In those trade days, the outsider comes into that community and tries to establish a relationship with women or girls in the community with a family that is prominent,” he said.

“The people start to treat him like a relative, so he ingratiates himself in the community in that way,” he said. “That’s how these traders established their connections and started to be successful.

“It’s exactly the same path,” he said. “Someone from the outside comes in, establishes a relationship, oftentimes with a young woman.

“Instead of trading with beads, robes or hides and providing European goods to them, they are ensuring people are becoming addicted and that they are amassing drug debts,” Rain said.

Rain spoke about how human traffickers use social media like a store catalog, searching for women and girls who fit the criteria and then getting them.

“Every time they put a picture out there, they need to have an awareness that somebody is looking at that picture,” he said, “who has malevolent intent.

“You can look at it like this, the methamphetamine is brought into the communities, and the women and girls are trafficked out of the community,” he said. “It is a part of the same web of organized crime.”

Rain believes that the Major Crimes Act, which was established in 1885, needs to be reformed or repealed.

This removed the sovereignty of tribes to punish criminal offenders on Native lands.

“Where does an act that was passed in 1885 fit in? When the Act was passed, there were seven crimes that the federal government had jurisdiction over in Indian country,” Rain said.

“Now there are 13 major crimes, so the major crime is more repressive now than when it was passed in the 1880s,” he said. “We need to get on a preventive footing, not a reactive one, and dismantle that Act.

“There is such a distrust with tribal and federal law enforcement that no one will come forward with information,” Rain said. “There are no secrets on an Indian reservation; there are no secrets in a tribal community; everybody knows something.

“A crime occurs, a person goes missing, tribal law enforcement shows up,” Rain said. “They respond and show up, but they have no jurisdiction to do anything. So, they call BIA criminal investigators or the FBI. How long does it take for them to respond?”

When people go missing, time is of the essence, and law enforcement will not file a missing person report until 48 hours have passed.

Rain goes into detail about how this needs to be changed in tribal communities and have a congressional fix of the Oliphant ruling.

Oliphant v. Suquamish Indian Tribe (1978) was a U.S. Supreme Court case that decided that tribal courts have no criminal jurisdiction over non-Natives.

“The first six hours are vital; the first 12 hours are crucial,” Rain said. “When you get into 24 hours and 48 hours, you are no longer looking to recover a missing person, and you’re looking to find a body.”

The Violence Against Women Reauthorization Act of 2013 recognizes the criminal jurisdiction of tribes over non-Native perpetrators of domestic violence that occur in Indian Country when the victim is Native.

“People have this idea that when the Violence Against Women Reauthorization Act is actually realized,” Rain said, “that all of a sudden tribal governments and tribal jurisdictions are going to have authority over non-tribal perpetrators and that it will fix the problem.

“It is going to be extremely limited, and the people need to know that,” he said. “If your tribe cannot provide a full bill of rights for the perpetrator, then the tribe is not going to have criminal jurisdiction over that perpetrator.

“We need a congressional fix of the Oliphant ruling because non-tribal people can no longer be allowed to go onto tribal lands,” Rain said, “to victimize tribal women, tribal girls, tribal boys, young men and commit crimes with virtual impunity.”

Moving forward, Rain plans to continue raising awareness of the MMIW issue and create a documentary focusing on MMIW in the Navajo Nation.

Rain made a public commitment that he would create the film if the funding were available. He intends to make the film primarily in the Diné language and focus on cases on the Navajo Nation. He is currently working on gaining more support to create this video.

“People need to recognize that this crisis is an existential threat to tribal people,” he said, “not just in this hemisphere but worldwide.”