Hataałii: Use of Navajo on Mars ‘disrespectful’ 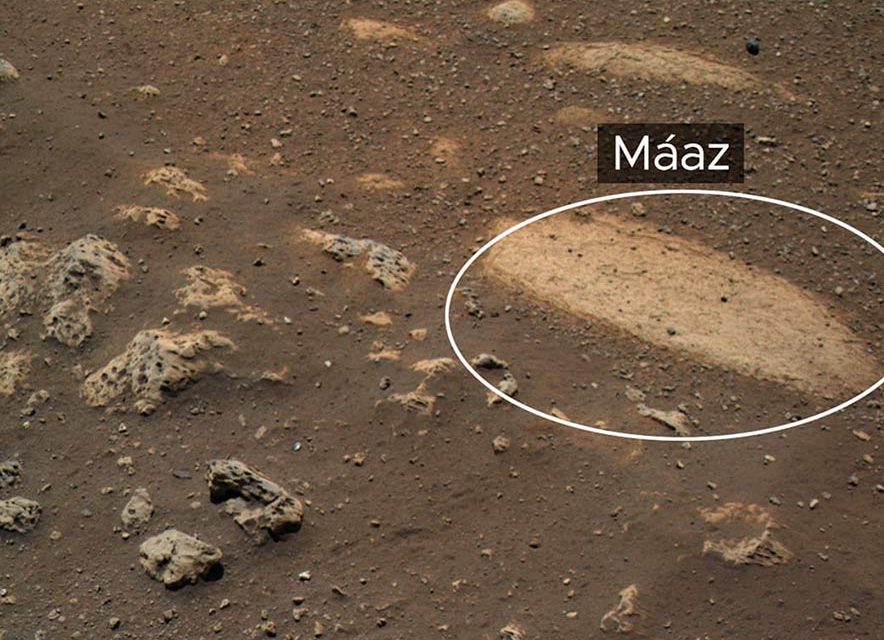 Courtesy photo | NASA/Jet Propulsion Laboratory-Caltech
A tsé called “Máaz,” the Diné Bizaad slang term for Mars, is the first feature of scientific interest to be studied by NASA’s Perseverance Mars rover. This photo was released by NASA on March 11.

NASA’s Mars 2020 Perseverance rover mission on March 11 announced Diné Bizaad is being used to name landmarks and features in a place with a high potential for finding signs of past microbial life.

The Perseverance rover landed in Mars’s Jezero Crater on Feb. 18.

The mission team is currently working in tandem with the president’s office to name rocks and soil with words in Navajo.

The president’s office composed a list of 50 words written in Navajo, including English translations, and it was emailed to the mission team to name these landmarks.

The words in Navajo include “hazhmęęzh,” a 1930s word meaning smooth or uniform, depending on how it’s used, according to Lyle Báhózhóní Harvey, a Diné Bizaad linguist at Báhózhóní Consulting.

Max said callers expressed concern over NASA’s use of Diné Bizaad on another planet.

“And we have to say something about it,” Max said in a March 17 report that was presented mostly in Navajo to the Health, Education and Human Services Committee. “It’s going to affect our prayers.”

“So the names of the rocks we use in our prayers, those names are being used on another planet,” he said. “It might force me to abandon that prayer and not use it again. So when I say those names, I would be hesitant, and it would be difficult for me.”

“And we are naming those clans too,” Max said. “The formation of the earth and if they are used for something else other than k’é, perhaps that might cause a conflict.

The medicine men believe the president’s office has overstepped this law in sharing the Diné language, which members of both the Diné Hataałii Association and the Diné Medicine Men Association say isn’t good.

“Maybe it’s already a done deal,” Max said. “But what we’re saying here is we would sure appreciate it if the tribal leadership – the president’s office – consults with us – the hataałii.”

The hataałii are the keepers of Diné knowledge. They are traditional leaders, historians, storytellers, and they are keepers of Diné ceremonies related to yádiłhxił, cross-cultural communication, linguistics, songs, prayers and cultural wisdom.

They are also experts on ancient Diné cultural astronomical knowledge and practices.

“We take care of stories – the hane’,” Max said. “Is it appropriate? Is it OK? If you value yourself and your heritage and your culture, you’ll think about them. Don’t we value our culture? It creates conflict.”

And the old Diné language doesn’t have a system to write Diné history, members of both Diné hataałii associations say. The most correct history lies within Diné songs and the prayers.

“So when you know the songs, you know a little bit of history that pertains to that song,” Max explained. “Our songs are our ancient texts (and) that’s where our history is.

“That’s why we are told, ‘Learn your language,’” he said. “It’s almost like the more songs you know, the more you know about our history.

“Stories that were passed on from generation (to generation) for thousands of years, decades and hundreds of years,” he said. “That’s what we’re talking about. Are we not valuing it?”

DMA President Leland Grass, who spoke only in Navajo, added that when oral language was given to the Diné by the Diyin Dine’é, a writing system wasn’t included. This is why the oral Diné language is found only in a medicine pouch.

“If the white men pick up our language, they will use it against us and use it in the wrong form,” Grass explained. “This is why the writing system was excluded.

“Even today, nahaghá is used to revitalize and heal you,” he said. “That’s it. The language used in ceremony is not something to be honored or recognized. It isn’t used to name geological features. The white men think differently than we do. To this day, we aren’t going by the written language.”

David J. Tsosie said the DHA leadership wrote a one-page position paper that presents the association’s opinion about NASA’s use of Diné Bizaad.

Tsosie, one of DHA’s founding members, said the Diné Centered Research and Evaluation also has a three-page position paper in support of the DHA.

The DHA’s position paper, dated March 16, states, “the decision by the Navajo Nation leadership clearly indicates disrespect and lack of protocols for the perseveration of Diné traditional knowledge.

“As Diné, we have a responsibility and the human and collective rights to move into the future with our cultural knowledge, language, and way of life,” the paper says. “We insist our leaders respect and uphold these rights, including those responsibilities outlined in Diné Fundamental Law and the United Nations Declaration on the Rights of Indigenous Peoples, beginning with the free, prior and informed consent of cultural wisdom keepers and spiritual healers when making decisions related to Diné language, cultural knowledge and preserving our way of life.”

The DHA leadership stated the association was never consulted about collaborating with NASA.

“We had a language, and we had our ways that were given to us by the holy people,” he said. “Our medicine people, we still believe that that’s the case.”

Tsosie said Diné Bizaad was used during World War II, when Navajo Code Talkers created an unbreakable code to help win the war in the Pacific.

“Even though our language helped win the war, we still have a lot of our veterans, their widows, their children that are without water and without a heating system living in deplorable conditions – some of them,” Tsosie said. “Now this is the second time that we’re being approached to use our language for an endeavor.”

Tsosie added that the Nez administration was so eager to embark on this collaboration with NASA that it didn’t include consultation with the two Diné hataałii associations.

“This is the same administration that denied the DHA for their request for funding … to implement how to deal with the trauma of the (COVID-19) pandemic and how people have been affected, especially those people who have lost loved ones,” Tsosie added.

“And for (NASA and the Nez administration) to embrace the use of our language without consulting the medicine people is a clear display of disrespect,” he said.

President Jonathan Nez did not respond to an interview request with the Navajo Times.

Diné are the image of the ancestors and Diné are created in connection with all creation.

These laws provide sanctuary for Diné life and culture, relationships with the world beyond the sacred mountains and the balance maintained with the natural world.

“We have a sacred obligation and duty to respect, preserve and protect all that was provided for us and we’re designated stewards of these relatives through the use of our sacred gifts and thinking,” he said.

“Nahasdzáán and yádiłhxił, those are our outfit, our traditional prayer – they follow that line of thinking,” he said. “We align ourselves with the earth and the sky. So, the fundamental law, it recognizes that.”

Words like these are the same used in Diné songs and prayers, said Grass.

“We just didn’t make this up,” Grass said. “Many of our own people don’t know this and they are going along with it.”

Tsosie said Diné bi beehaz’áanii further states the right and the freedom of the Diné to use the sacred elements of life such as natural resources.

“Anytime we go to an area where it’s sacred, and use anything that’s sacred, we offer protocol,” Tsosie explained.

“The UN Declaration of Rights of Indigenous Peoples talks about that,” he said. “And this includes the right to maintain and protect, develop past, present and future manifestation of our culture.

“Yet the (Nez) administration does not provide us with that,” he said. “They do not respect our traditional medicine people.”

Nez has said that his administration’s partnership with NASA will help to revitalize Diné Bizaad.

“We hope that having our language used in the Perseverance mission will inspire more of our young Navajo people to understand the importance and the significance of learning our language,” Nez said in a news release.

Members of both hataałii associations said they support that but the English language cannot be used to teach Diné Bizaad nor apply the slang term “Máaz” as a newly created Navajo word for Mars.

Members of both associations said Máaz is “an inauthentic and culturally insensitive approach to the use of and application” of Diné Bizaad, which must be taught in the home within a Diné community.

“There’s a better way to do that – to put that into the curriculum at a young age,” Max said. “It bothers me to see that some of the schools that were on the Navajo Nation a while back – and some might still be in existence – barely hanging on … that can help our young kids to learn their language.”

Members of the DHA said they wholeheartedly support schools in the Nation and support parents and grandparents teaching their own children and grandchildren, respectively, Diné Bizaad.

“If we don’t do that, one day we might reach a point where there’s only one person learning their language and who knows their language,” Max said. “And when that person (dies), there will be nothing. It’d be like nááts’ó’oołdísii came through.

“There could be nothing, just a trail,” he said. “We don’t want to get to that point.”

Delegate Daniel E. Tso, chair of the HEHSC, said members of the Navajo Nation Council and the two Diné hataałii associations are not criticizing Aaron Yazzie, the Diné engineer for NASA, nor his education, the road that took him to NASA and his work on the Perseverance rover.

“NASA didn’t approach the policy makers with the 50 (Diné) words,” said Tso, adding that one of the Navajo words NASA is using is “ha’ahóní,” meaning long-suffering, which is being used for the Perseverance rover.

“I’m not happy about that,” Tso said. “Any effort like that should come to the Council.”

“When you mix them up there will be conflict and people will be disconnected,” Grass said, alongside Tsosie and Max. “Those (sacred Navajo words) are used in our prayers and they are sensitive to us.

“We Diné are very fragile, and the white men don’t see that, nor do they go about doing things correctly,” he said. “Please understand that.”

Grass added that perhaps Navajo names NASA used should be rescinded and replaced with unconsecrated Navajo words or names and places not used in Diné songs and prayers.