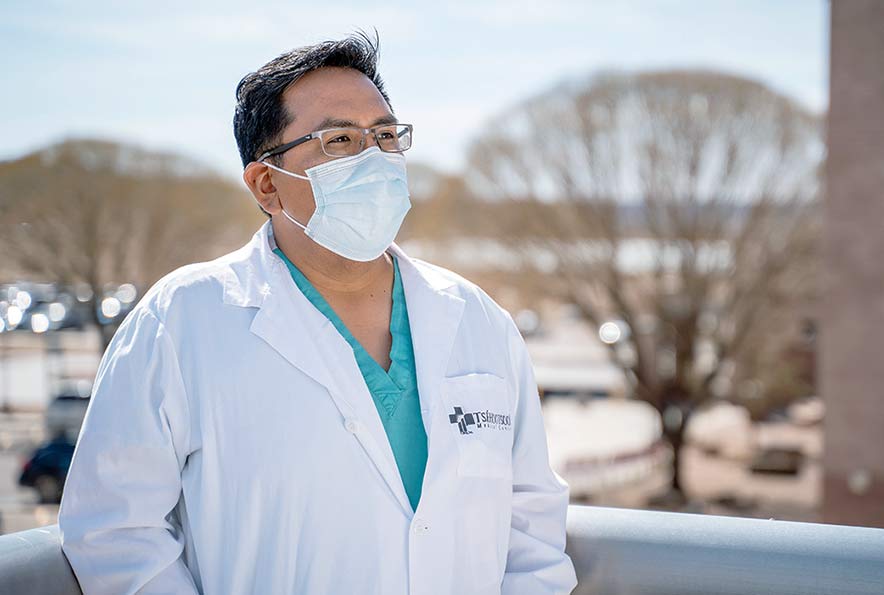 Chief of Internal Medicine Aaron Price, 42, said with everything he’s learned as a front-line doctor at Tséhootsooí Medical Center this past year, his guard is still up when it comes to COVID-19.

“We can’t let up,” he said. “We’ve made so much progress with the introduction of vaccines. We have momentum right now. We’re starting to corner the virus and stop it in its tracks.

“But the minute we assume that everything’s back to normal,” he said, “that’s when we’re going to get hit.”

He said while he’s not a fan of the virus he respects it for what it is.

“I think you have to respect your opponent that way,” he said. “When you drop or lower that respect for it, it’s going to get you.”

Price says he’s been telling patients since Day 1 that COVID-19 is like nothing we’ve ever seen before.

Price said when he recently caught sight of the signature “Darth Vadar” face shield he wore in the ICU to protect himself, he flashed back to the worst of the COVID-19 outbreak.

“It all came back to me in an instant,” he said. “I could hear the noises. I could hear the sound of the ventilators going off, the nurses running back and forth, the patients struggling to breathe.”

One year ago, Tséhootsooí Medical Center was in high preparation mode as the coronavirus first made its way to the United States and then to Navajo in mid-March with the first outbreak in Chilchinbito, Arizona.

“Our team developed an incident command encompassing multiple divisions of the hospital and we were preparing for the worst and a horrific wave of COVID-19 cases,” said Price, who specializes in internal medicine with an emphasis in cardiovascular medicine.

The wave arrived at TMC with the first identified case of COVID-19 in April.

“We were the last part of the reservation to see COVID-19 hit,” said Price. “By then we had assembled a perfect team of physicians to take on all of the challenges of COVID-19. Our ability as clinicians to rise to the occasion and take care of patients with acuity pushed us to that next level.”

Price said he is thankful to the TMC front-line workers, including physicians, nurses, respiratory therapists, clinicians and environmental services staff who swiftly implemented everything they had prepared for.

However, by then the shortage of personal protective equipment had already begun, which was unnerving, he said.

“There were times when the burn calculator indicated we were days away from running out of PPE,” said Price. “We got really resourceful.”

Multiple businesses and organizations, including Home Depot and Lowe’s, stepped up to offer supplies and the hospital set up a sewing “strike force” that included non-medical administrative employees who formed an assembly line to make protective gear at the Wellness Center.

“There was a group of seamstresses here who brought out their sewing machines and started doing what they do,” said Price. “That really allowed us to continue operations.”

Former medical students also stepped up and organized a grassroots effort to make sure staff had all the supplies they needed, including sanitizers and snacks.

By July, the COVID-19 outbreak was severe and TMC was operating beyond capacity.

Price said one of the biggest challenges medical workers faced was the conflicting messaging about the virus from the highest levels of government, which caused many people to reject the COVID-19 prevention measures.

“I think that falls back to the root cause of the leadership that was in power at the time,” he said. “There was no uniformity, there was no general consensus. We definitely were fighting a misinformation campaign from Day One.

For this reason, even some patients at the hospital believed the virus was a hoax and many front-line workers were ostracized, he said.

“I had an elderly grandma who came in,” said Price. “She clearly had COVID. One morning I went in and she was getting dressed, ripping the oxygen off and she said, ‘You guys are all lying to me. The president of the United States said this is a fake virus and I’m out of here.’”

Price said his breaking point came in the midst of the summer surge when TMC was at 125% capacity with about 95% COVID patients.

“It was essentially a whole COVID ward up here at the hospital,” he said.

At the same time, he saw reports of people disregarding the warnings about COVID-19 and prevention measures.

“I recall looking at some of the newsfeeds and I saw our neighboring Phoenix area and everything was a free-for-all,” he said. “People were partaking in festivities and not taking precautions. Things were opening up and it was like COVID never even happened.”

On a break, Price stood on the hospital balcony staring at the sandstone cliffs.

“I remember having tears and I couldn’t figure out why I was crying,” he said. “I wasn’t emotional, but I could feel tears coming down my face.”

‘All hands on deck’

Price said while the July surge was overwhelming and there were many unknowns, at that time no one could have anticipated the crippling winter surge that would tear through during the holidays.

“At that point, it was all hands on deck,” he said. “COVID-19 patients require so much expertise and intervention. We literally had everybody here in-house.

“Vacations and leave time were cancelled,” he said. “We were working roughly 80- to 100-hour weeks sometimes to make sure all of the patients were taken care of appropriately.”

By that time about half of the staff was immunized.

“We were a little bit more emboldened, but still very careful,” he said. “By then we had our use of barrier protection, PPE, and pour processes down cold.”

Price said another thing that has helped him to stay strong during the pandemic is running.

“If I were to get sick I wanted to have the lung capacity, lung health, lung strength to get me through,” he said. “You really want to get out and use your lungs, get plenty of sunlight, make sure your Vitamin D levels are high.”

He said those who are overweight or obese are particularly vulnerable to COVID.

The introduction of steroids like dexamethasone was a game changer for treating COVID, said Price.

“All and all it seems like the general gestalt is that steroids are what made the difference,” he said.

‘Best of both worlds’

The majority of providers at TMC, including hospital, primary and specialty care medicine, are Native American with a majority Navajo, including Price, who was born and raised in Fort Defiance.

“One of the things we boast about is we have the highest number of Navajo providers of any hospital in the country,” he said.

Traditional Diné practitioners are also part of the team.

“When we roll it out to visitors they’re just amazed at how integrated we are here, how much we utilize the best of both worlds to ensure optimal healing, both from a traditional sense and Western medicine as well,” he said.

While traditional healers do not treat COVID-19 patients directly, they have conducted regular smudging and cleansing ceremonies for TMC.

“It was essentially a mass healing for the entire hospital,” said Price. “That was very helpful.”

Price says the next phase of the pandemic will include long term treatment of COVID-19 long-haulers.

“Because it’s such a long, arduous journey to get through and recover from COVID, some patients end up just mentally giving up and throwing in the towel,” he said.

Price said he’s had some COVID-19 patients tell him they would actually hear voices discouraging them.

“Some patients would tell me they would hear something telling them, ‘Why are you fighting, why are you resisting?” he said. “We tell them you’ve got to stay positive. You’ve got to think good outcomes, you can’t let this COVID mess with your mind.”

Addressing mental health and trauma, including for front-line workers, will also be part of the next phase of recovery, said Price.

Having cared for veterans in the past, Price has witnessed post-traumatic stress disorder, which can trigger flashbacks, nightmares and severe anxiety.

“I can totally appreciate having endured so much death, so much suffering, so much sickness in large doses in such a short period,” said Price. “I think there are a lot of docs, nurses, respiratory therapists and support staff who will basically exhibit the signs of PTSD.”