Keeping a tradition alive: Traveling to Ééhániih Day honors those who came before 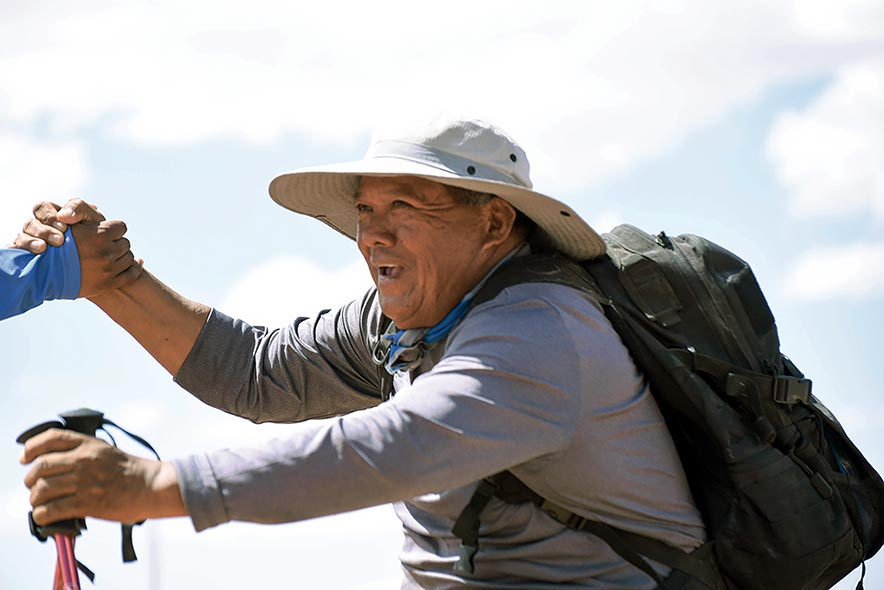 Navajo Times | Krista Allen
Ray Begay, son of Dan Yazzie Begay from Narrow Canyon, Utah, gets a hand from a fellow hiker after taking a short break alongside Navajo Route 16. Ray and his group every year hike from Narrow Canyon to Naatsis’áán bi Ééhániih Day in early August. The event, however, didn’t take place again this year because of the pandemic.

Whenever Gene Shepherd reached a convenience store, he would go inside to buy his dog, “Tonapah,” a package of hot dogs to eat.

Tonapah likes hot dogs, said Shepherd, who traveled for one a week on horseback with his mustangs “El Caballo” and “Lonesome Cowboy” to the Ééhániih Day grounds.

The site is undergoing natural succession because it’s been unused for two years. (Ch’il diilyésii and ts’ah have grown.)

Shepherd had stopped at three stores – Klagetoh, Ganado, and Blue Gap – by the time he reached Daniel Benally Sr.’s residence on Dziłyíjiin, where he gave his horses and Tonapah a break before he headed toward his brother David Shondee’s nearby residence.

Shepherd said he started his annual ride from the Padres Mesa Demonstration Ranch in Chambers, Arizona, to Naatsis’áán on Thursday, July 29, even though Naatsis’áán Chapter had canceled Ééhániih Day – the first Saturday of August – for a second year because of the coronavirus outbreak.

By Aug. 2, he was days ahead of schedule and was already near Peabody Coal Mine on Dziłyíjiin.

“This is the third time I’m camping here,” Shepherd said. “I don’t remember which year, but we had a whole bunch of riders.

“The second time too,” he said, “we had another group of riders.”

For the past 12 years but one, Shepherd has traveled to Ééhániih Day on horseback to honor the ancestors and lately the people who’ve died from the coronavirus.

“Honoring elders,” Shepherd said, “and just keep it that way too, just remembering our elders and how they used to travel before the vehicles.”

Shepherd last year didn’t make the ride because the virus was spreading relentlessly. He spent seven months looking after a ranch in Torreon, New Mexico, instead. 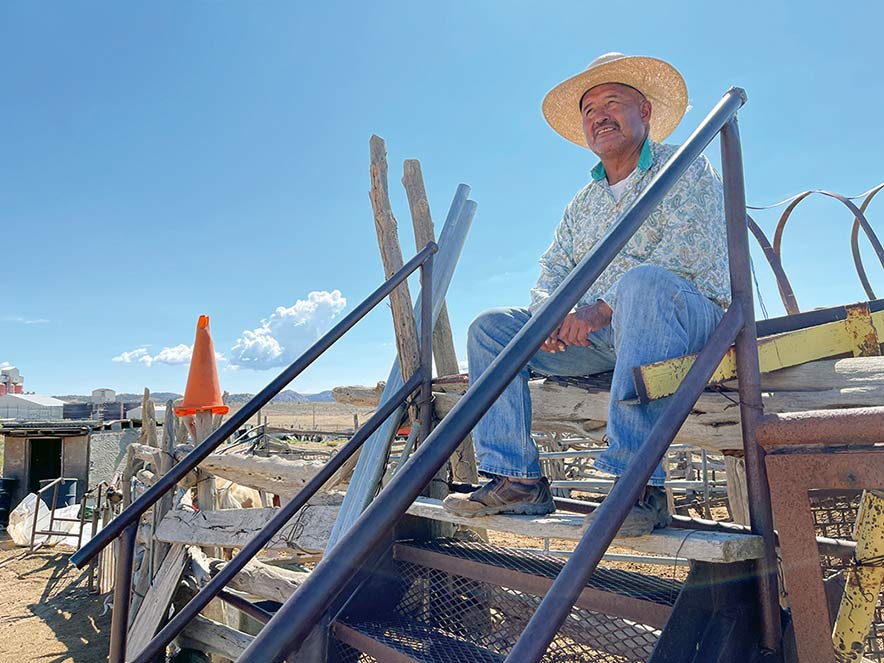 Navajo Times | Krista Allen
Cowboy Gene Shepherd waits for a friend to show up with breakfast at Daniel Benally Sr.’s corral on Dziłyíjiin. Shepherd spent two nights at Benally’s residence so his horses and dog could rest before continuing the journey to the Ééhániih Day grounds in Naatsis’áán, Ariz.

“It was real hard on everybody last year,” Shepherd said. “We lost a lot of people.

“I think that’s what got us (me and my family) through – prayers and songs and using the sweat lodge often,” he said. “I think that really helped us until the COVID-19 vaccine came out.”

Shepherd spent two nights inside a hay shed at the Benally family’s corral on Dziłyíjiin. He slept on straw bales with Tonapah nearby and El Caballo and Lonesome in a corral a short distance away.

“I was relaxing, napping, and eating,” Shepherd said.

He waited for a friend to show up with breakfast at the corral on a Monday morning.

“Everybody’s real nice,” he said. “I have lots of Facebook friends checking up on me.”

Shepherd traveled around 30 miles a day through heat and heavy rainfall until he approached Shondee’s house, where he washed up and had something to eat.

A couple of days earlier, he stopped at his brother’s house in Táchii’ where he took part in táchééh.

“My rig is over there – my saddle and pack saddle,” Shepherd said. “It kind of got wet so I’m drying them out. When I got here it rained about four times before sundown.”

Stuffed inside his pack saddle, he said, was water, an extra set of clothes, a pair of loafers, tarp, extra saddle blankets, (which he used as a mattress), his journal, and dog food.

“The hay situation, we’ve been lucky,” Shepherd said. “I’m not carrying any, I’m depending on my relatives along the way.

“But when my friend gets here,” he said, “I’m going to ask him to take me to Kayenta to get a bale of hay to feed (El Caballo and Lonesome) again.”

In the east, meanwhile, Ray Begay led a group from his father Dan Yazzie Begay’s homestead in Narrow Canyon, Utah, to the Ééhániih Day grounds in Naatsis’áán. 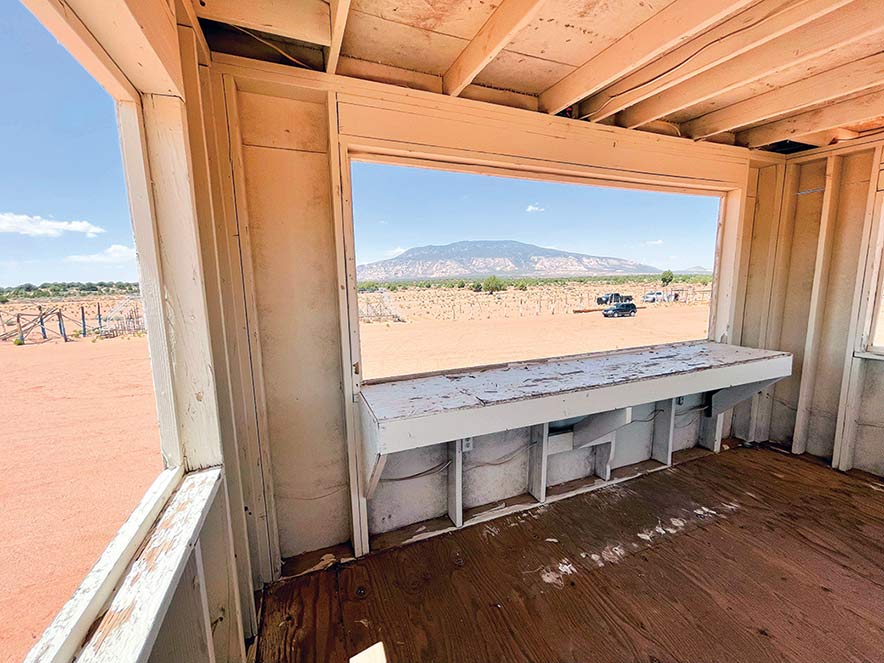 Navajo Times | Krista Allen
The announcer’s stand sits empty at the Ééhániih Day grounds in Naatsis’áán, Ariz. A cooking crew sets up a makeshift kitchen to make lunch for the incoming hikers who trekked from Narrow Canyon, Utah.

Dan Y. Begay, 90, every year led a group through water-worn passageways in the Utah Navajo landscape, telling stories, sharing his wisdom, teaching the younger hikers until they reached Naatsis’áán.

Ray said his father recently hung up his hiking shoes because he’s getting older.

Ray said his group started their hike to the Ééhániih Day grounds at 5:20 a.m. on Aug. 5.

“We hiked all the way to Tall Mountain,” said Melcita Stanley, who’s been hiking with Dan Y. Begay for the last 16-plus years.

“It took us all day,” she said. “We camped out on the east side of Paiute Canyon. And then we walked in the wash and through some cornfields.

“We do this every year during (Ééhániih Day),” she said. “We leave on a Thursday and we arrive on Friday. On Saturday mornings, we’ll just stroll in. It’s fun. Once you conquer this hike, it makes you stronger.”

“And the next year, you look forward to it,” Ray Begay added.

Stanley, who’s from Narrow Canyon, said she tries to find people through the year willing to participate in the 40-plus-mile hike that Dan Y. Begay paved the way for the younger generation.

“Every time we take off, Dan wants to follow us,” Stanley said. “When he was stronger, he used to say to us on the trail, ‘Go ahead, rest. I’ll walk ahead of you.’ Over the years we tried to keep up with him, but he’d always outrun us.”

“Usually, we do a short prayer before we all take off,” Stanley said. “But it’s been challenging every year. This is something that keeps us strong. It keeps the (Dan Y. Begay) tradition going. The heat is – we manage. And we all take care of each other.”

Stanley said hiking Dan’s trail to Naatsis’áán is in honor of the Diné men and women who came before, to celebrate culture and traditions, and to renew oneself in a place of beauty between Narrow Canyon and Naatsis’áán where the ancestors ran sheep and cattle.

“We look up to Dan,” Stanley added. “That’s tradition and memory that we can hold on to. Our kids can take over later on in life.”