Standing in his cornfield, Ahkima Honyumptewa said everything about the traditional Hopi lifestyle is meant to strengthen the body, mind and spirit. 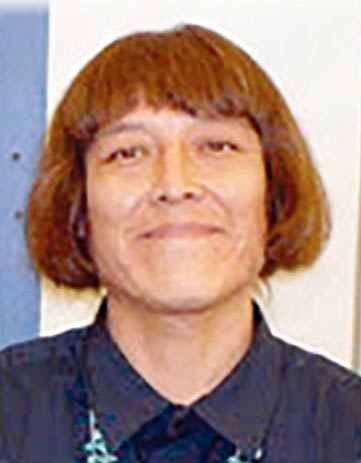 “I’ve always had a connection to this land and a culture to lean on,” said the 39-year-old Honyumptewa, who is of the Snake Clan. He suggests the best thing to do during this time of pandemic is to stay engaged in productive activities.

“That’s how you can get out of all this craziness mentally,” he said. “What I’m doing to get through is a lot of arts and crafts and farming.” Directing energy toward anything constructive, including learning new skills, is a perfect way to make use of this time, and grow as a person, says Honyumptewa. “If you keep busy and focused on something productive, you’re mind is developing,” he said.

As a Hopi farmer, Honyumptewa stresses the importance of going back to some of the basic traditional staples and modeling that for the young people. An award-winning artist, his schedule is that of discipline and structure, including getting up early every morning to work on his craft.

His artwork depicts the seasonal Katsina dances that occur in Hopi. “I show the people what we see,” he said. “I portray it in paintings.”

Honyumptewa says he enjoys sharing his culture through his work, which draws a lot of positive feedback, especially from young people. “They are just in awe,” he said. “They take it to heart.”

He also makes Hopi textiles and has won numerous awards, including Best of Show for weaving at the 2019 Museum of Northern Arizona Hopi show for a traditional manta, a shawl used for protection.

A dedicated runner, Honyumptewa puts in his miles across the mesas every week in the midday sun.

“Be careful in life, but don’t be afraid to live life,” advises Honyumptewa. “Be humble and truthful and we will get through this.”

“We catch sicknesses because our bodies are out balance, whether it’s a virus or a cold,” said Honyumptewa. “All of that is caused by an imbalance.”

He said people who behave in a negative way or are mean to other people make themselves more vulnerable, because the energy builds and builds until explodes.

“You start getting health problems and you’re more vulnerable to sickness when your attitude and your whole being is devoted to to negativity,” he said. Not only does it affect the person, he says, but everybody around them. “That’s not how we’re supposed be acting,” he said. “We’re supposed to be the other way. We’re supposed to be honest, respectful, and kind.”

Honyumptewa believes that people can best help others by first helping themselves through self-knowledge and healing. “The number one way to fight any sickness or disease is through happiness, not only loving yourself but loving others,” he said. “The more you feel that positive energy, the more you protect yourself from harm.”

Exercising, eating healthy, and studying new things are key to that, he said. He recommends learning about history, other cultures, sages, and practices such as martial arts and yoga. “Study the truth to better the mind,” he said.

Honyumptewa believes the best way to serve is through virtue. “When you help people you start to gain trust and build connections,” he said. As you generate more and more positive energy, you have enough to give it away, he said.

That also applies to leadership, he said, which keeps a people balanced. “Without that, a nation is in chaos,” he said. “There’s corruption, mistrust, bribery.” He believes that is the case with the United States government today. “There are all kinds of side deals that the government does that we don’t even know about as people,” he said. “That’s why I don’t like this way of life because it’s like one big crime syndicate. This government robs and steals from the people — our energies, our spirits, our selves.”

That’s why the world is falling apart, he says, because we are all distracted. “The real anti-Christ is someone pretending to be God,” said Honyumptewa. “They’re covering it all up behind closed doors.”

He says real, true people don’t go around claiming they can do things, they just do it out of the goodness of their heart. “Most importantly, we never ask anything in return,” he said. “Everything is supposed to be given freely.” He says that is how you know the real medicine men. “They don’t go out advertising,” he said.

Honyumptewa believes people should learn to depend on their own goodness and energy. “The only way it works is through good, through compassion, and unconditional love,” he said.

As a steward for the land, Honyumptewa feels a strong responsibility to take care of it. “We were put here for a reason,” he said. “This is the center for all spiritual development.” He said that was the whole purpose of Hopi migration, which led to Oraibi, from where he descends. “The whole Southwest is the spiritual center and what we do here magnifies by ten,” he said. “If we’re not strong enough mentally, physically and spiritually, we can hurt ourselves if we’re unaware of that power that is here.”

He says the power can be used for bad or good. For example, if you exercise and train on this land, you can develop ten times faster than anywhere else, he says. “That’s why this land is so important,” said Honyumtewa. “It’s a sacred, sacred spot.”

Even the Bible talks about the area, he says. “Everyone around the world knows this spot as the Garden of Eden,” said Honyumptewa. “That’s what the Hopi Mesas are, the actual spot of creation.”

In the old days, there were springs flowing out of the mesas and water was abundant, he said. He believes all of North and South America belongs to the Natives. “That was our responsibility as Native cultures of this land, to migrate and send spiritual roots into the ground,” said Honyumptewa. “That way the land knows who we are; it feels us.”

Long ago, everyone knew that all things were connected, he said. “Everything was intertwined, the planting, the ceremonies, the races, everyday life,” he said. “That’s why we were told not to go away from our culture because of our connection with the earth.”

Honyumptewa says today it is a minority who are living by the old ways that served as a natural form of preventative medicine. His advice is to work toward giving up cravings and bad habits, born of this modern world.

“It takes patience and time,” he said. “You just can’t give up on yourself.” Honyumptewa urges people not be afraid of death, which is a natural part of life, he said.

“Life and death is a continuous cycle that repeats itself over and over again,” he said. “We evolve from stage to stage.” Humanity is our teacher, said Honyumptewa. “It’s a teaching tool spiritually,” he said. “It teaches us how to connect universally.”

He says politics and technology should be avoided, as they are meaningless to spiritual development and are a waste of time. “We want to learn things now that will develop our spirit lifetimes from now,” he said. “The only way to progress through the cycle of life and death is enlightenment.”