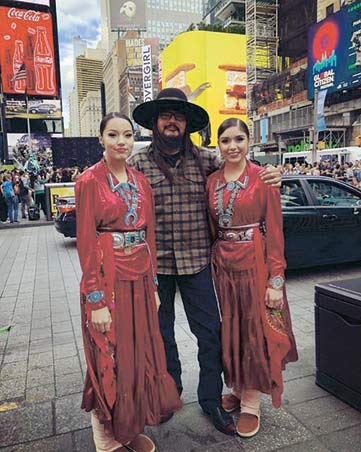 Courtesy photo
Tewakeedah and Dachuneeh Martin captivated a Times Square audience with their culture and beautiful voices Sept. 7. They are photographed with documentary producer Pete Sands.

Imagine the fashion show like this: Darkness encompasses the room. There’s hardly a shuffle from the captive audience. There are only four rows of people on either side of the runway, yet there’s room for projections to be shown from floor to ceiling across the whole wall behind them.

The azure, wispy-clouded skies of San Juan County are the first images coloring the wall-to-wall projections.

The parched earth and mesas follow, and then a beautiful Diné girl.

This is Dachuneeh in the film. Her eyes are closed, her hand reaches out.

Another hand – Tewakeedah’s – reaches for hers. They clasp.

Models start to walk down the runway during these scenes.

Then, Tewakeedah and Dachuneeh, live at the fashion show, begin to sing. Everything fades away when they sing.

Tewakeedah relates, “When I sing, I think about what I’ve been through. Expressing my feelings through song is how I send my message out in the world.

“I’m in my own element,” she said. “I don’t pay attention to who’s listening. I forget about the crowd, and it’s just myself.”

More models walk down the runway. Still no sound from the audience. Perhaps they all sense they’re seeing more than fashion.

The images behind the audience show a traditional, bonding family ritual: hair binding. Tewakeedah is brushing Dachuneeh’s hair with a be’ezo, a bundle of dried grass bound tightly together.

The last model walks down in an arresting dress. Painted over her mouth is a red hand – a strong message on the silencing of Native voices.

The audience, enlivened by the haunting song and scenes from the film, awards rapturous applause for the designer during the finale. The tone of this fashion show has been different from others. It’s serious, real.

The footage showing behind the fashion show is that of a Pete Sands documentary in production called “The Hurting Song,” a film on the murdered and missing. The Martin sisters are featured in the film set for release next year.

Tewa wrote the theme song herself. Sands – himself a Montezuma Creek native – had introduced the girls to songwriting and asked them to write a traditional song with a certain sound. Tewa saw his vision immediately.

She wrote the song in Navajo with help from her mother.

“The song is roughly a prayer,” she explained. “Some would say it’s not traditional. It’s in Navajo but sung in a northern style. I’m both Sioux and Navajo and mixed that up for the theme song.”

“The overall message of the whole thing is to be caring,” she said. “Whenever you go through hardships in life, you have a support system. Whenever you have a way, to fight against it. You are strong as a human being.”

Reactions to the song have been overwhelmingly positive. One viewer commented, “This song is an ongoing heartbeat for our people who do not have a voice anymore.”

Others express pride in the Martin sisters as beautiful examples of Diné culture.

One fan wrote, “You are the perfect role model for my girls. Because of you, my daughter wants to go for Miss Northern Navajo in a few years.

“Because of you, my daughter wants to learn to speak Navajo more and to learn the culture,” the fan said. “She wants to be ready because you showed her it’s possible and not to give up.

“You inspired many and continue to do so. You are beautiful inside out. Continue to be blessed in all in do and everywhere you go. Thank You.”

Bringing their culture to Times Square, in a separate showing, left onlookers impressed.

The director, Pete Sands, wrote on Facebook, “We literally stopped Times Square in its tracks on this night … people were so amazed to see traditional Navajo women dressed in their traditional attire walk into the middle of the masses.”

He continues, “‘Be proud of who you are and where you come from’ is one of the messages we left there in the middle of Times Square. They made their mothers proud, made their families proud. Their ancestors were proud, our crew was damn proud of them. I was proud of them.”

A video of “The Hurting Song” theme can be viewed on Facebook. Currently, it has more than 111,000 views. With spectacular cinematography, storytelling elements, and music that burrows into your soul, it’s a message that stays with you.

It’s also a massive credit to the filmmaker, Pete Sands, who brings out the best in the girls.

The Martin sisters will be touring with Pete Sands for more screenings of the short in Washington, D.C., and Los Angeles.

Tewakeedah and Dachuneeh are the daughters of Kevin and Mable Martin of Montezuma Creek. They attend Whitehorse High School.