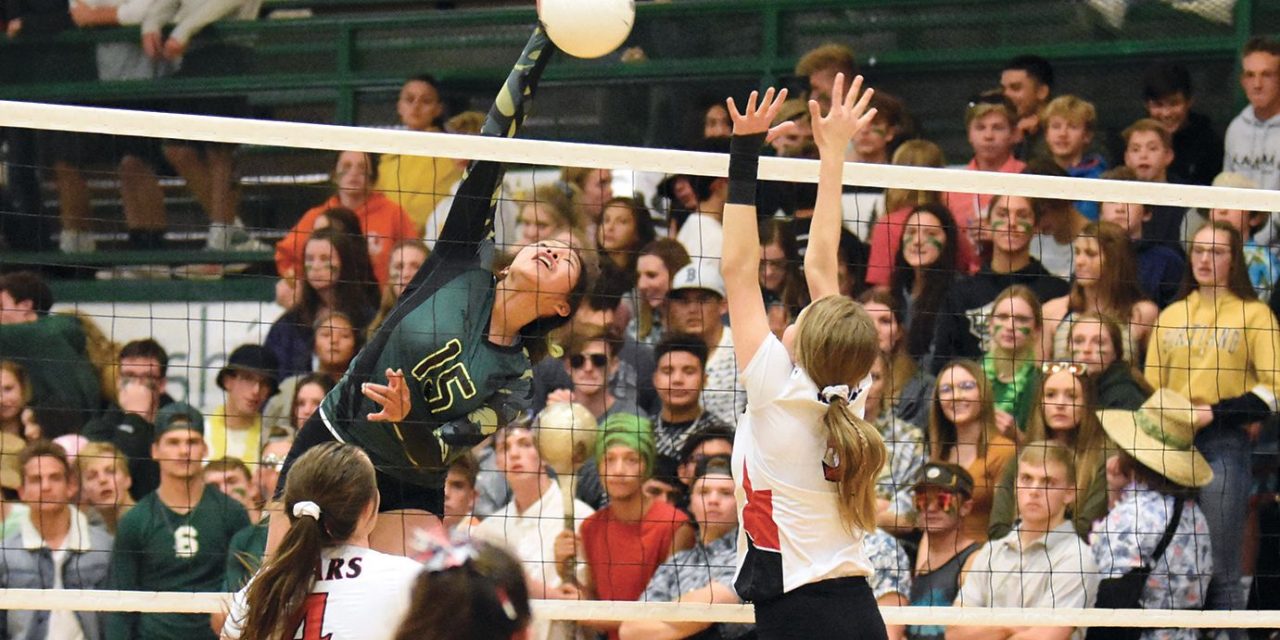 In a time-honored tradition, the Flagstaff volleyball team took a dip in the school’s natatorium after outlasting region rival Prescott Valley Bradshaw Mountain on Thursday night.
The set scores were 25-22, 24-26, 25-21, 21-25 and 15-9.

The third-seeded Lady Eagles have been carrying out the ritual for generations, so it seemed appropriate as they advanced into Saturday night’s Final Four round of the Arizona 4A state volleyball touranment.

“I don’t know when it started,” Flagstaff outside hitter Gracelyn Nez said. “It started before I got here but I hope to do it every single year until I graduate.”

So far she’s a perfect 2-for-2 in that formality as the Eagles had to grind this one out. Coincidentally, this was Flagstaff’s third time beating the Lady Bears in five sets even though they had a chance to end it in four.

Leading 16-9 in the fourth set, Flagstaff couldn’t quite close it out as the Bears used a 12-1 run to get the momentum on their side with senior outside hitter Mailani Manuel putting down six of her team-best 27 kills.

Manuel’s sixth winner in the rally gave Bradshaw Mountain a 22-18 cushion and after exchanging side outs the Bears forced a fifth set on an ace by senior setter Nicole Shaver.

“In between sets we were talking over and over about how we need to stay as a family and stay mentally strong,” longtime Flagstaff coach Beth Haglin said. “That was the biggest difference for us, going into that fifth set.”

Haglin said she didn’t want their fourth-set collapse to bring her team down and there were no signs of that as Flagstaff jumped out a 7-2 lead behind some crafty kills by Nez, who finished with a match-high 29 kills.

After a brief timeout by Bradshaw Mountain, the Bears closed that gap to 9-6 but a back row kill by Nez got the Eagles going again.

“We didn’t let the emotions get to us,” Haglin said. “We just played solid defense. That was what the game was about, playing solid defense and just fighting, scratching and clawing.”

With the win, the Eagles have reached the Final Four round for the second consecutive season. Haglin said it’s awesome to be back and considering what she had coming into this season she wasn’t sure how they were going to put things together.

“We had a lot of youth in some key positions and we were just waiting to see who would step up as leaders,” she said. “I feel like Shea (Wilson) and Devynn (Hathathlie) stepped up to be emotional leaders out there.”

The Eagles are one game away of playing in the 4A championship game. Only No. 2 Estrella Foothills stands in the way of Flagstaff High reaching that peak as both teams will square off on Saturday night for the right to play in next Wednesday’s championship game.

“That doesn’t mean anything because everybody changes a lot over the season so it’ll be interesting to see what they have,” Haglin said. “A lot of my friends have played them so I’m sure we’ll get the goods on them but the bottom line is they’re a good solid team. I know their middle tips a lot and they have a real strong left-hand hitter.”