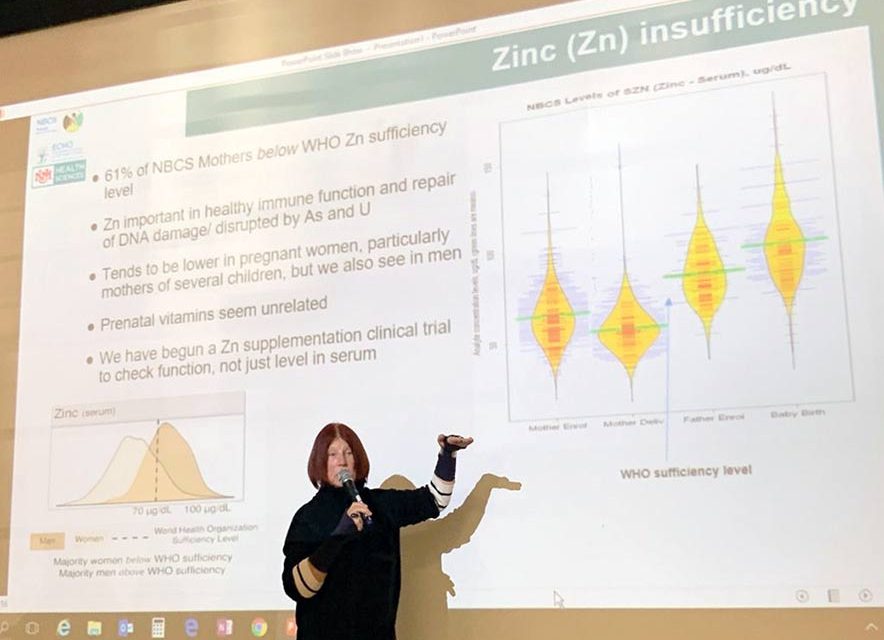 Thanks to the Navajo Birth Cohort Study, we may know by next year. It’s looking promising.

The study’s recently launched research project, catchily titled “Thinking Zinc,” is looking at Navajos 18 to 48 years old who have high levels of uranium in their bodies and how they respond to a regular zinc supplement.

The laboratory research on zinc is so promising that there is no control group, explained

Johnnye Lewis, the Birth Cohort Study’s principal investigator, to the Diné Uranium Remediation Advisory Commission at its regular meeting last Thursday. All the volunteer participants will be studied for three months before starting the zinc supplement, and then at intervals after starting it, so no one will be deliberately left out of the possible benefits.

“We’ll just compare them with themselves,” Lewis said.

The University of New Mexico toxicology professor, generally the epitome of the cautious

scientist, practically gushed as she showed a Power Point about laboratory experiments that show zinc repairing strands of DNA that were broken by exposure to arsenic and uranium, two elements that have been found in high concentrations in the blood and urine of some study participants.

“We are all so hopeful that this is going to offer some relief,” she told the commission.

Lewis said uranium and arsenic, which occur naturally in many parts of the Navajo Nation and are present at high levels in uranium mine tailings, can actually break chains of deoxyribonucleic acid, the building blocks of cells and genes. This is a major concern since DNA can replicate itself and is passed down to offspring. “Broken” DNA could cause a mutation that is passed down through multiple generations.

A healthy body produces “repair proteins” that can knit the broken ends of DNA chains back together, Lewis explained, and zinc is a major player in these repairs.

“The uranium and arsenic knock the zinc out of the repair protein,” she told the commission and about 30 people who gathered at the Shiprock Chapter House to observe the commission meeting.

“If we add the zinc back in, though, it can out-compete it. And it doesn’t take heroic

That’s how it works in the lab, but human studies are needed to make sure it works in actual bodies, which are way more complex than Petri dishes. The Birth Cohort Study has recruited participants in Eastern Agency and Tachee, Arizona — two places with high levels of uranium exposure — for the study, and they should have some results to report next year, according to Lewis.

So … just in case this works, should Navajos start popping a zinc tablet every day?

​“I wouldn’t recommend that folks go home and start taking a bunch of supplements,” Lewis said. “Too much zinc is bad, too. Metals interactions are complicated.”

However, “We may be back here in a year with that recommendation.”

If you’d like to try a nutritional approach, there are some traditional Navajo foods that are

The Navajo Birth Cohort Study, which started in 2010 to look at levels of uranium and other metals in parents and newborns and follow them through the first year of life to assess their development, was given a huge boost in 2018 with a $4.4 million grant from the National Institutes of Health. The study can now follow the birth cohort (babies born around the same time whose parents entered them in the study) until five years of age, and has broadened its scope of study considerably. It is also now part of a nationwide study that includes two other Native American populations as well as people of different races and socioeconomic levels all over the country.