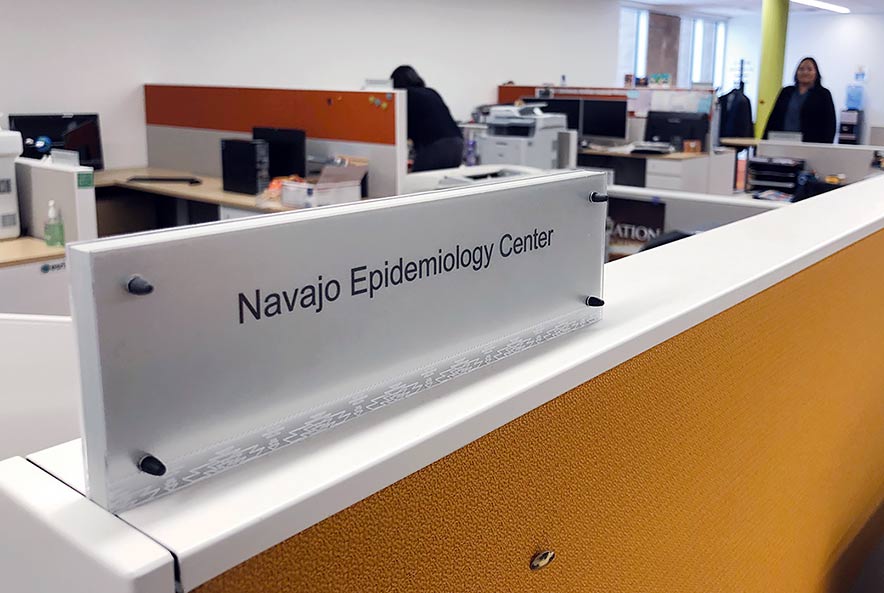 Most people don’t know it exists, but the Navajo Epidemiology Center is a gem of an office that’s tucked away in an inconspicuous corner of Admin Building 2.

Ramona Nez is at the lead of the team. She is self-assured and talks with confidence about the work the center does. It’s easy to see the passion she has for her job.

“One of the things we like to stress is the word ‘empowering,’” Nez said during an interview. “To get the data, the information, to the people and to the programs. Then, turn around and work to improve the health status of the Navajo people.”

The center isn’t glamorous. It’s not even funded by the Navajo Nation; it’s entirely self-funded through grants. It’s very small but it’s scrappy and full of energy to help improve the overall public health on the Navajo Nation.

“A lot of it has to do with monitoring health status and trends over time,” Nez said. “Then conducting research on monitoring and building the surveillances across the nation.”

Epidemiology, according to the Oxford Dictionary, is the “branch of medicine which deals with the incidence, distribution, and possible control of diseases and other factors relating to health.”

The center creates research around public health for the Navajo Nation. They study everything from cancer rates to the impact of the junk food tax.

“When there’s infectious disease, then they’ll usually call us and we’ll look to coordinate how we’ll cover that case,” said Nez, the center’s senior epidemiologist. The current “hot item”? Syphilis.

The center has become aware of skyrocketing rates of sexually transmitted infections on the Navajo Nation, the most pressing being syphilis because it “can cause serious health problems if it is not treated,” according to the Centers for Disease Control.

It’s important to note that “syphilis can spread from an infected mother to her unborn baby.” This is referred to as congenital syphilis and can result in death of the child.

In New Mexico, according to the AP, New Mexico has the eighth-highest rate of congenital syphilis cases.

“Congenital syphilis is preventable with screening and treatment of pregnant women,” the AP reported. This is why the New Mexico Department of Health issued a health order that will make STI testing a part of standard prenatal care. Under this order all pregnant patients will be tested in their first and third trimesters, then again at delivery, the department said.

Epidemiology has been referred to as the cornerstone of public health and disease prevention.

This center is unique in that it’s the only one dedicated to studying the public health of a specific tribe. It’s difficult for other Native nations to create tribe-specific research, just because they are much smaller than Navajo.

“We’re a bit unique because we only serve Navajo,” Nez said. “Whereas our sister epi centers, there are multiple tribes in which they provide their services.”

There are 11 other tribal epidemiology centers throughout the United States that make up the organization called the Tribal Epidemiology Centers. The other centers cover whole states and over a dozen different Native nations.

“(We) report on and identify the health priorities,” Nez said. “We get calls asking for the data and we share our reports.”

One of those reports is called the “Navajo Nation Health Survey” that surveyed 2,700 adults in person. This report is modelled after the Behavioral Risk Factor Surveillance System used by the CDC and state departments of health.

“There is no tribal specific related data,” project manager Simental Francsico said of the state and national surveys. “They do aggregate data down to the racial classifications of American Indian and Alaskan Native populations throughout the US.”

The Navajo Nation Health Survey was a huge undertaking and provided amazing insights into the health of the Navajo people. Through this research 12 key areas and health risk factors were identified.

Francisco was the lead epidemiologist for this first-of-its-kind study.

“It wasn’t feasible at the time to do phone surveys,” he said. “We decided to do in-person surveys and to actually collect data about Navajo adults.”

The research was conducted over three years from 2013 to 2016. It was then analyzed and released last year.

The report was so groundbreaking that it received the Robert Wood Johnson Foundation’s National Award for Outstanding Epidemiology Practice in Addressing Racial and Ethnic Disparities. Francisco’s abstract bested over 800 other applicants. The center is gearing up once again to conduct another round of these surveys.

This isn’t the only research being conducted at the center.

Delores Becenti is trying to build the public health technology infrastructure that would help improve the data management capacity. Del Yazzie is currently conducting research on the junk food tax and whether or not it’s actually helping Navajos stay healthy.

Nez also wanted it noted this isn’t the only research or work being done at the center. They have many other projects they’re trying to get off the ground.