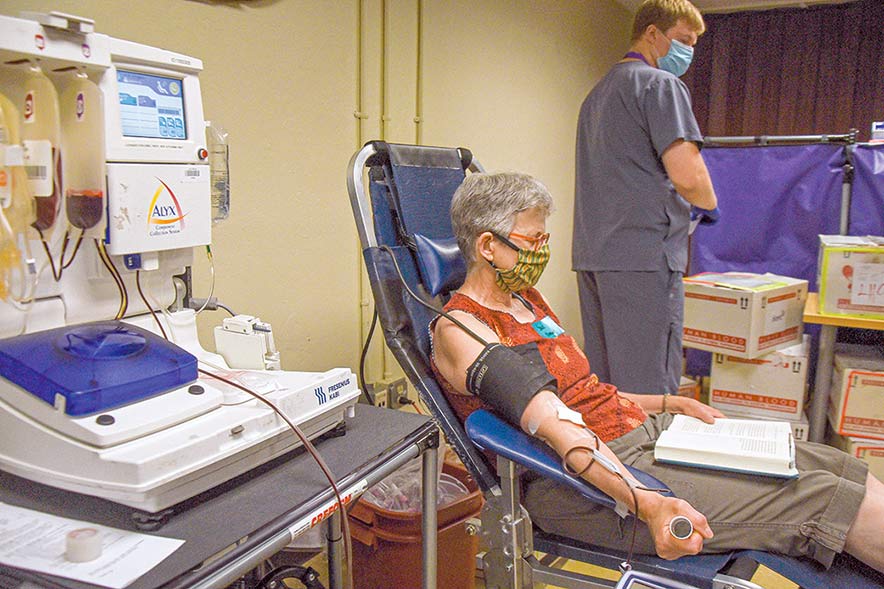 Special to the Times | Krista Allen
A COVID-19 survivor reads while she donates convalescent plasma during the first donation event at Tuba City Regional Health Care Corporation. The patient, who did not want to be named, said her arm was numb at the time of the donation.

“There’s not a lot of treatment options for the coronavirus and convalescent plasma is something that seems more effective than anything else that people are trying right now,” explained Dr. Anne M. Chmilewski, a family physician at TCRHCC’s Sacred Peaks Health Center in Flagstaff.

“So, Navajo has been hit really hard with the virus and a lot of our very sick patients, some of them have died,” she said. “So we wanted to do what we could to help give people a better chance of surviving – our sickest patients, basically.”

The blood from people who’ve recovered from COVID-19 is called convalescent plasma. And more than 20,000 people in the U.S. have also been treated, but with little evidence thus far that it makes a difference.

Thousands of coronavirus patients in hospitals around the world have been treated with convalescent plasma therapy, an experimental treatment that some physicians are using for people with severe coronavirus disease because no drug has been proved to be safe and effective for treating the virus, according to the Mayo Clinic.

The U.S. Food and Drug Administration hasn’t approved any drugs specifically to treat people with the virus.

But people who’ve recovered from the virus have antibodies – proteins the body uses to fight off infections – to the disease in their blood.

Researchers hope that convalescent plasma can be given to people with severe COVID-19 to boost their ability to fight the virus. It also might help keep people who are moderately ill from becoming more ill and experiencing serious COVID-19 complications.

“We (talked) to our partner hospitals, where we (are) sending our sickest patients, like Flagstaff Medical Center – the specialists there are saying, ‘We do want to give plasma to people because we have patients from Navajo who we think will benefit from it but we don’t have plasma,’” Chmilewski explained.

“They are in such high demand. We don’t have enough (convalescent plasma) donations,” she said. “So, we thought this could be a way for people who’ve been through the virus, help others who are coming behind them, who are getting sick now.”

Tónaneesdizí physicians say convalescent plasma may contain protective antibodies that may transfer immunity from a patient who had the disease to someone still suffering.
This experimental practice was used during the 1918 influenza virus as well as to treat measles in the 1930s. More recently, plasma therapy has been used to treat victims of Ebola, SARS, and H1N1 flu.

Convalescent plasma donors had to be free of COVID-19 symptoms for 28 days, according to Elfreida Bizaholoni, the infection prevention control officer at Tuba City hospital, who ran the donation site last Wednesday.

Donors had to go through eligibility, said Bizaholoni.

Some who had to be hospitalized went through blood transfusion and they had to meet certain requirements outlined by the FDA before donating.

“They had to be 28 days symptom free from the time they had the positive test,” she explained, adding that once the plasma is donated it would be sent to (a lab) where it will be screened and tested to check for other infections.

“And then they give back to the place that’s donating – so it’ll either come back here (Tuba City) or we’ll distribute it to Flagstaff Medical Center and to Banner Health (in Phoenix) where we’re sending a lot of our patients,” she said.

Bizaholoni said Tuba City hospital currently doesn’t offer convalescent plasma therapy for severe COVID patients because they are sent to either Flagstaff Medical or to a Banner hospital in Phoenix.

Blood and plasma have been used to treat many other conditions and they’re usually very safe, according to the Mayo Clinic.

The risk of contracting COVID-19 infection from receiving convalescent plasma therapy hasn’t been tested yet. But researchers believe that the risk is low because the plasma donor has fully recovered from the infection.

“Did you know with one donation of plasma, it can be given to three people?” Yazzie asked.

That’s true as it depends on the weight and health of a donor, said Chmilewski.

“Usually their donation will generate two or three bags of plasma,” she said. “That can be given to three people, for most people.”

“This is a big deal because a majority of the people we send down to the Valley, it’s just the community helping other community members,” Bizaholoni added. “We have people who are donating who have lost folks to the COVID virus, so they know what the hardship and the pain is for folks who are trying to fight the infections. They want to help. They’re actually assisting in that fight against COVID.”