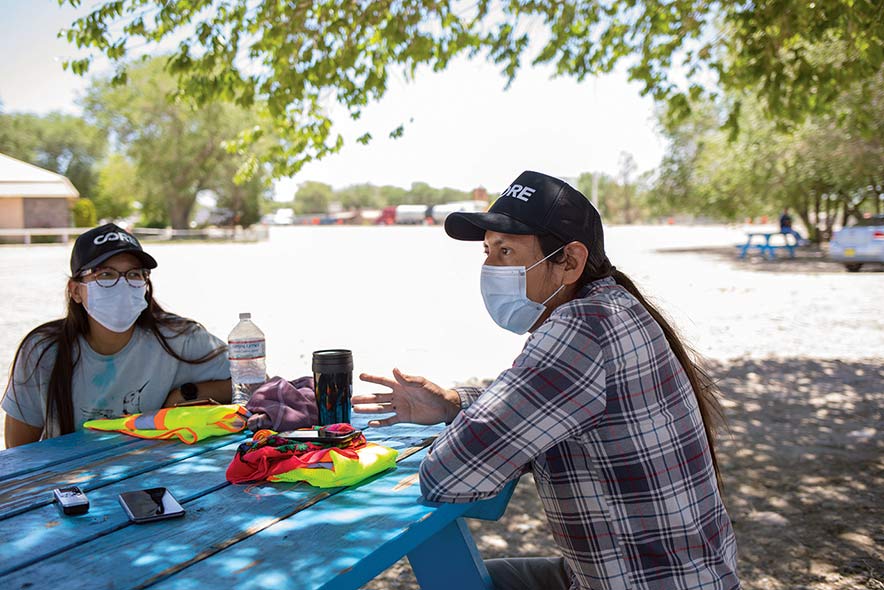 Navajo Times | Sharon Chischilly
Breanna Lameman, left, and Kyle Jim discuss their experience with the Northern COVID-19 relief group and why they left on June 11 at Bethel Christian Reformed Church in Shiprock. They started a new group called Arrowhead Lifeway.

The defunct Northern Diné COVID 19 Relief Effort was a disaster waiting to happen.

Although with grassroots intentions, the group quickly became a political takeover after stakeholders admitted to their political agenda.

In April, Kyle Jim and Breanna Lameman joined the relief group with the sole mission to help their community and its residents who were struggling to get supplies, as they were told to stay home and isolate to slow the spread of the virus.

“The whole idea behind this was the chapter house wasn’t operating,” said Jim. “Everyone a part of Northern Diné would be community members but the nonprofit they would be supporting is Northern DIné. So this was seen as a grassroots effort.”

Lameman, a student at the University of Arizona, was home and wanted to volunteer and once she did she made accountability regarding donations and following safety protocols priorities.

“I started to assist with basic inventory of donations coming in, grants, and whatever else was coming through Northern Diné,” said Lameman.

Lameman’s job consisted of not only working on the ground with Jim, and making sure the people taking boxes of donations were accounted for, but she also managed the K’e Needs List, which was a list of people who would be served next.

“It was more than a eight hour work every day,” said Lameman. “We probably put in at least 12 hours a day. It was nonstop for us.”

The safety training and protocols were mandatory for volunteers and Lamean was strict on that.

Jim had seen how other relief groups weren’t making safety a priority and therefore eventually becoming contaminated, so he, too, emphasized the need for their volunteers to follow safety protocols.

As a relief group, it seemed as though Jim, Lameman and volunteers had everything running smoothly. They prioritized safety, kept impeccable inventory, strived to be equal and fair on the donations given to the people, and even began venturing further out into the more isolated areas of Northern Agency to deliver donations.

But then politics came into play.

While Jim and Lameman were busy being the boots on the ground with the relief effort, they said secret stakeholders meetings were happening between Shiprock Chapter President Duane “Chili” Yazzie, Delegate and Law and Order Committee Chair Eugenia Charles-Newton and Josey Foo, of Indian Country Grassroot Support.

Jim and Lameman knew things weren’t going smoothly within the group. They noticed inventory wasn’t looking right, some items were missing, monetary donations that reached up to $100,000 had never been seen or spent by them, and stakeholders challenged them on their strict safety protocol that was needed to be followed by all volunteers.

“We realized we were coming up short on inventory,” said Jim, who said he couldn’t understand the backlash from families claiming there was favoritism with how donations were given.

Then the Shiprock Chapter claimed the Northern Diné group had stolen donations from the chapter house.

All of this wasn’t adding up to Jim.

Throughout the Nation’s response to COVID-19, Charles-Newton has questioned loudly and publicly about President Jonathan Nez’s donation giving, even stating it is a political ploy.

As chair of the Law and Order Committee, she’s questioned the attorney general about the donations the Nation has received.

Everything she appeared not to tolerate was everything she was guilty of doing herself within her community, as far as Lameman and Jim were concerned.

But that changed later on when Lameman questioned her.

Things came to a head with the lawmaker when Jim and Lameman realized inventory was off and they noticed six boxes full with triple the amount of items were off to the side and labeled by Charles-Newton.

These boxes were intended for two families living within Shiprock and one of the families lived across from City Market.

“We were, like, ‘Why is she giving more food to other families?’” said Lameman. “We are serving these rural areas and they aren’t getting this amount. This isn’t right. This isn’t equity.

“We aren’t serving families equally,” she said. “Those families weren’t on our K’e Needs List. Families found out they could go to Eugenia and skip the line and they could be served automatically.”

After questioning her, Jim and Lameman said the delegate told them they looked tired and should step down or they could be replaced. Then she made note to tell them the only reason why they are receiving donations is because of her title.

This type of argument was just one of many in the short time this relief effort was established.

But they never saw this money and Foo was in charge of it.

“It was very difficult from the ground working that we were requesting from Josey, Chili that we need help,” said Jim. “We need equipment, dolly’s, flatbeds, but they said ‘no.’ We found it strange from the beginning.”

In a statement to the Navajo Times, Foo said, “Several individuals and entities have been soliciting, writing grants and receiving money or items for Northern Diné COVID-19 Relief Effort since the coalition came into being on March 26.

“We are just one of them,” she said. “I believe we do take care of the most funds. Others have obtained money and item donations from their affiliated groups who cannot play more active roles on the ground, and others otherwise take care of item storage and distribution.

“I think all of us who handle funds or items for NDCVRE act as fiduciaries,” she said. “ICGS, for instance, receives money grants and donations in our name but obtained or donor-designated for NDCVRE, so the money isn’t ours and must be handled carefully, separately, and distributed in the name of NDCVRE.

“As far as I know, NDCVRE has not dissolved,” she said. “There are lots of people in need. If it does dissolve, the funds in our safekeeping would be re-designated to another entity for the people as swiftly as possible.”

For a while the Northern Diné COVID-19 Relief Effort GoFundMe account stated that it has $62,360. But the group dissolved and the money would be refunded. The GFM account now can’t be found.

Lameman and Jim said after they were told by Charles-Newton that the group had a political agenda, then finding out she and Yazzie were intercepting donations (including from former Gov. Bill Richardson) intended for the relief group by claiming she was operating under the Shiprock Chapter House, and Charles-Newton’s dismissing rules and regulations that the group had set forth, the two along with their volunteers left.

“When it came to gathering our stuff at the storage at Mesa Elementary we were going to gather things that were bought personally, things that were under Diné Introspective,” said Lameman. “Eugenia came in and threatened us saying the DOJ is coming for you, you’re going to be audited right now, we are going to take this to court, I have an attorney.”

After leaving Jim and Lameman posted on social media they would be leaving the Northern Dine COVID-19 Relief group because they didn’t support the political agenda. They started up Arrowhead Lifeway.

“Eugenia is very nice at first,” said Sarah Chacon a volunteer who followed Jim and Lameman to the new group. “She liked directing people where to go but she was never really around for the ground work.

“I’ve only seen her work on the groundwork maybe four times,” she said. “She would get boxes for people she knows … she was getting a lot more food than we give in a typical package.”

Chacon’s further claims are similar to that of Jim’s and Lameman’s. Although they started Arrowhead Lifeway, they said they aren’t backing down from threats directed toward them and will continue serving families.

“They were just using Kyle and I for political gain,” said Lameman. “We don’t have access to the money. Now they are accusing us of stealing.

“We know what we did was right,” she said. “We are trying to serve families and get things going. They are just trying to cover up what they were doing wrong.”

Yazzie: Not party to takeover

Navajo Times reached out to Charles-Newton and the speaker’s office for comment and didn’t receive a response by press time.

This reporter sent an email to Yazzie, but received no response. After the editor sent an email to him, Yazzie responded claiming he did not receive the reporter’s questions at first.
Yazzie stated he was the principal organizer of the group but left “active participation” on April 25 to contribute his time with another group working toward food resiliency and true food sovereignty.

When it comes to Jim and Lameman’s claims, Yazzie said he’d prefer not to engage in “he said, she said.”

As for intercepting Northern COVID relief donation, Yazzie said he did not know when this instance happened.

As for secret stakeholder meetings, Yazzie the only time was after a propane assistance day on June 4, when Charles-Newton and Foo told him there would be a police report filed about an alleged theft.

When it comes to Jim, Laneman and the group not seeing any of the money from donations, Yazzie said he never saw cash donations.

“I did get one check for $3K and that was promptly turned over to Kyle,” said Yazzie. “I had understood that the fiscal agent was setting up a bank account for NDCVRE and that is where the cash donations were to be deposited. I have no knowledge of specifics of transactions or otherwise.”

When it came to Jim and Lameman trying to retrieve donations labeled for Jim’s nonprofit Diné Introspective, after they left the group in early June, this is the incident he said Charles-Newton and Foo were considering calling the police.

“If there was a political takeover, I am not party to it,” said Yazzie. “The one thing that I recall Eugenia say that I understood led to this assumption is that ‘the donations being received were due to the response to our political offices.’ There may have been other comments or discussions that led to the alleged political takeover allegation, I don’t know.”