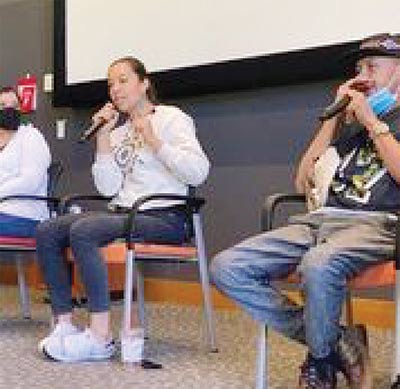 The nervousness never leaves Christopher Mike-Bidtah, aka DEF-I, when he performs as a rapper or motivates people through words when touring with the “Dream Warriors.”

The Dream Warriors is a group of artists from across the U.S. that inspires and gives back to Native American communities by hosting workshops, storytelling and performance.

Tanaya Winder, Lyla June Johnston, and DEF-I met at Fort Lewis College in Durango when they told their “stories of resilience” about adversities they faced growing up and the obstacles they’ve successfully overcome.

The first drink of alcohol came to Winder when she was 14 and she blacked out.

“Alcohol became something to numb my pain,” Winder said to the audience in Fort Lewis College’s Vallecito room on Sept. 17.

Winder’s family encouraged her to attend Stanford University to become a lawyer because she was good with words and debate.

But when she was a senior in high school her grandfather died, and she dropped out of school.

A few weeks later, she wanted to go back to school and finish, but the school would not allow her to return even though she was set to be the salutatorian and had a 4.0 GPA.

“They said you’re not going to get caught up,” Winder said about her high school rejecting her.

Her counselor however advocated for her return.

“She (counselor) got the principal to say, ‘If you can get one teacher to let you back in their class, then you can come back,’” Winder said.

The only teacher, Mr. B, who allowed Winder back, taught a spoken word class.

Mr. B had known Winder for years and made her agree to perform at the poetry slam contest in Durango. Winder did not place but she found a lifeline in poetry.

“For the first time in my life, like being the best didn’t matter,” Winder said. “It was how poetry made me feel, like it gave me that freedom.”

Winder went on to Stanford University and found her niche in writing.

Winder said, “You think once you make it, ‘I am at Stanford, like all my dreams are going to come true,’ but I’ve heard people say it doesn’t matter how successful you are, you can’t out run your trauma.”

She returned home and almost fell back into her old coping mechanism. Fortunately, the Upward Bound Program offered her a position as a residential aide and that changed things for her.

Her work with youth inspired her to stay sober and motivated her poetry. Winder is a published poet and travels with Dream Warriors to inspire others.

“I always thought healing was this final destination, but I am only realizing now it’s a journey, and you always have to work on it,” Winder said.

Johnston snorted coke at 11. She grew up in Taos, New Mexico.

Despite growing up around alcohol abuse she still was a good student.

It was not until she got out of high school that she would go to parties only to be abused or assaulted.

“Unfortunately, a lot of people were abusive to my body,” Johnston said about people who would get her drunk at parties only to take advantage of her, hoping she would not kick them off.
This happened to her a lot and began to diminish her spirit.

“I just thought it was normal,” Johnston said.

Johnston continued on to Stanford University despite all she endured. When she was a sophomore she broke her spine and hip during an earthquake in Chile.

It was facing death that made her take healing steps to recovery.

“Is this how you want to die, an addict? In a shell of a woman?” Johnston asked.

Even though she ran drugs for people when she was in Chile, her spirit would not allow it, so she got serious and asked for guidance through prayer.

Johnston said she asked the Creator to get her sober and was thankful for the ceremonies in which she participated.

“Those ceremonies help me have a space to pray for what I needed,” she said.

The wisdom she collected from her experience were the words, “It is not your fault.”

“Furthermore, they said you are sacred, nothing anyone can do to you can make you un-sacred,” she said. “You’re born sacred, and you die sacred, that’s how the creator made us.”

Today, she is working on finishing her Ph.D.

The Dream Warriors plan to grow by inspiring through storytelling ended with a performance by DEF-I. He acknowledged his mother as the most resilient person he knows.

“She is my supporter, she helped me write before I could walk,” he said. “She’s been there for me through the ups and downs. I think our mothers are very resilient. I give props to my mom.”