‘I miss my brain’: Frontline hero continues to struggle with COVID-19 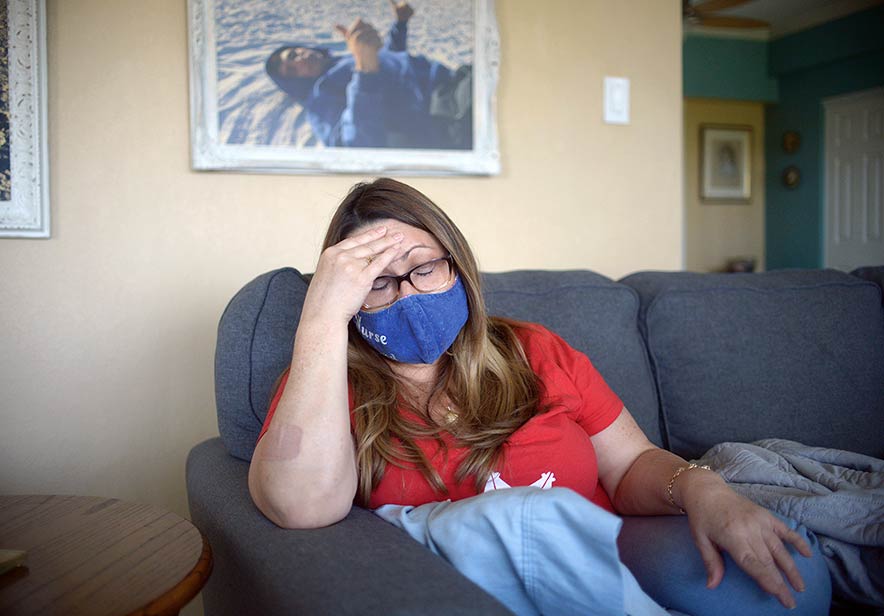 Navajo Times | Donovan Quintero
Tyra Street, an ER nurse at Phoenix Indian Medical Center, grabs her forehead while trying to remember a word on Thursday at her home in Phoenix. Street has been dealing with the long-term effects of COVID-19 since March.

Emergency Room nurse Tyra Street, 51, thought she had seen just about everything in her career.

That was before COVID-19, the respiratory disease that has stopped the world in its tracks since it came into existence in Wuhan, China.

Street, Oglala Sioux, who works at the Phoenix Indian Medical Center, now spends her days at home hoping and praying her mind recovers.

The shortness of breath isn’t an issue anymore. She is expecting to always cope with joint pains.

All are the after-effects of COVID-19, which she contracted in March. The two latter effects she is not too worried about. Her mind, on the other hand, she said on Thursday at her home in Phoenix, she hopes she does not lose.

“I don’t care about changes to my respiratory system going forward, but I certainly would like to retain my cognitive function,” she said. “I forget to do things.”

At the time the Arizona Department of Health Services reported the first known state case on Jan. 26, when an Arizona State University student who traveled to Wuhan contracted it, Street was working in the emergency room.

Street is used to dealing with dangerous diseases and infections. Being an ER nurse for the last 10 years, she said she’s handled patients with HIV, Hepatitis B, tuberculosis and pneumonia, to name a few.

She knew her way around handling dangerous sicknesses. In addition, she added, wearing a mask is common practice for nurses and doctors.

Nearly two months after the first case was reported, Street began experiencing a dry cough at work. The doctor heard the cough and asked who was coughing. She said it was her. Not thinking much of it, she went home thinking she was OK.

“Then I started to get a fever,” she said. “It was a Saturday. I got to the hospital, I had a high fever. And then it was just kind of like a storm.”

On March 21, she tested positive for COVID-19. Street compared the illness to a “hardcore flu” that lasted for two weeks.

Still, she told herself she had dealt with far worse sicknesses.

Then the shortness of breath got rougher. At the time, she remembers, the only recommendation was to stay home.

She endured the sickness even as it continued to worsen. When her fever seemed to be its worst, she went to the hospital. That’s when she found out she had caught pneumonia.

In May, the fever subsided, she said, and she went to back to work. And for two weeks, she worked and agonized to breathe. Fighting COVID-19 since March had taken its toll.

“It was terrible,” she said. “That was really tough experience to go through. I was still sick.”

She added that her mind had not yet been affected.

She started getting sick again. She caught pneumonia again and, this time, ended up in the hospital.

She got a diagnosis and found out she had a kidney infection and very low blood pressure. She also got shingles, as well as losing her sense of taste and smell. Her shortness of breath came back too.

“’Wow, my body’s really failing me from that time when I got sick in March,’” she remembered telling herself.

In July, she took another test and it came back negative. By now, her body’s battle with the virus was evident, and her mind was drawn into the act.

She isn’t sure when her second bout with the virus began affecting her mind, but she noticed it one day when she went on the Division of Motor Vehicles website to change her Florida license plate to Arizona. She had a heck of a time trying to understand the instructions.

She loves solving problems. Her work in the ER is part of that, she said.

“When people come in puzzled about what they are sick with, we have to figure out what it is,” Street said. “So once we figure it out, we can rule out all emergencies. If it’s a non-emergency, you could follow up on outpatient. If not, then based on the level of sickness.

“Nurses are there in intensive care and in the ER, and are trained to look at things critically,” she said.

“Oh my God, what is it called?” Street said after forgetting she was talking about her critical thinking and being an ER nurse a moment ago.

Street closed her eyes and held her fingers to her forehead struggling to remember what she had been talking about.

“‘Why can’t you remember that but not to shut the refrigerator door? I have no idea. Why is that, but, um,’” she said to herself before returning to talking about the after-effects of COVID-19.
Street sa
id fellow nurses and friends have been supportive and have been there for her “like rocks.” Friends and fellow nurses Carly Arnold and Jayne Most, who both contracted COVID-19, gave her words of encouragement, she said.

“And like we’re just kind of a tight-knit,” she said. “And they have encouraged me, saying I’m in the right place, I’m here for a reason and that ‘we need more nurses like you.’ I’ve been very lucky.” 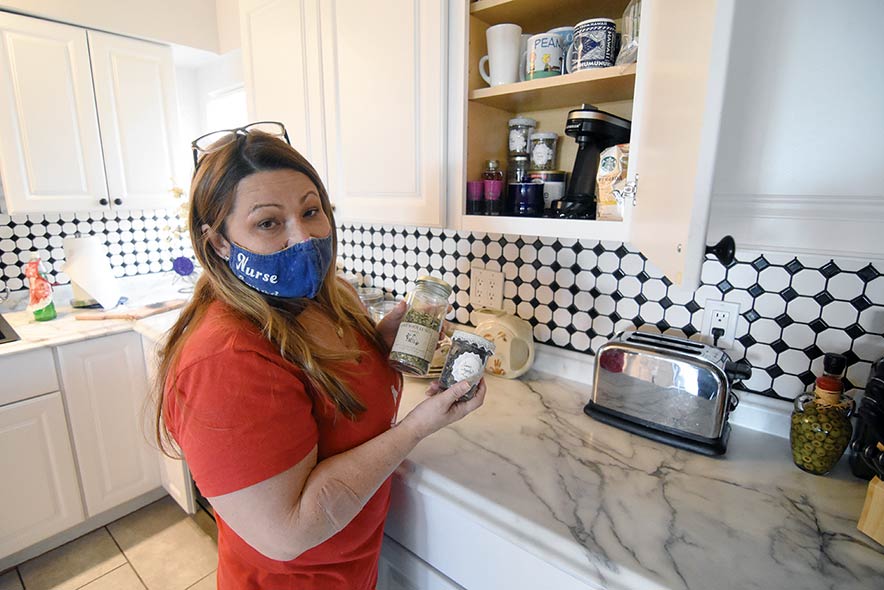 Tyra Street, an ER nurse at Phoenix Indian Medical Center, shows the teas she has been drinking at her home in Phoenix. Street has been dealing with the long-term effects of COVID-19 since March.

Nearly six months has gone by since she got sick. These days, she spends her time sleeping because post-COVID life is tiring.

If she isn’t sleeping, she is connecting with other people who are also struggling with what she’s struggling with. Sometimes, she said, the mental hardships get to her.

She turns to her faith whenever she begins feeling depressed. When she’s feeling good, she said she’s able to go to her apartment complex’s poolside area and take her dog for a short walk. Even that can be very difficult, she added.

On Tuesday morning, Street said she and a friend are working on her workman’s compensation paperwork, which she is entitled to under the Federal Employees’ Compensation Act. But she couldn’t remember her password, so she was locked out.

“My password, I can’t remember them,” she said. “I had it written down and entered it wrong too many times. I miss my brain. So, God willing, my brain returns to where I’m at a normal function. I’m OK with that, whatever time that takes.”

Now she has to wait for an hour before she can try logging in again to finish filing out the forms.

“I’m exhausted. It’s scary,” she said. “I just need to keep the faith and keep my head up.”