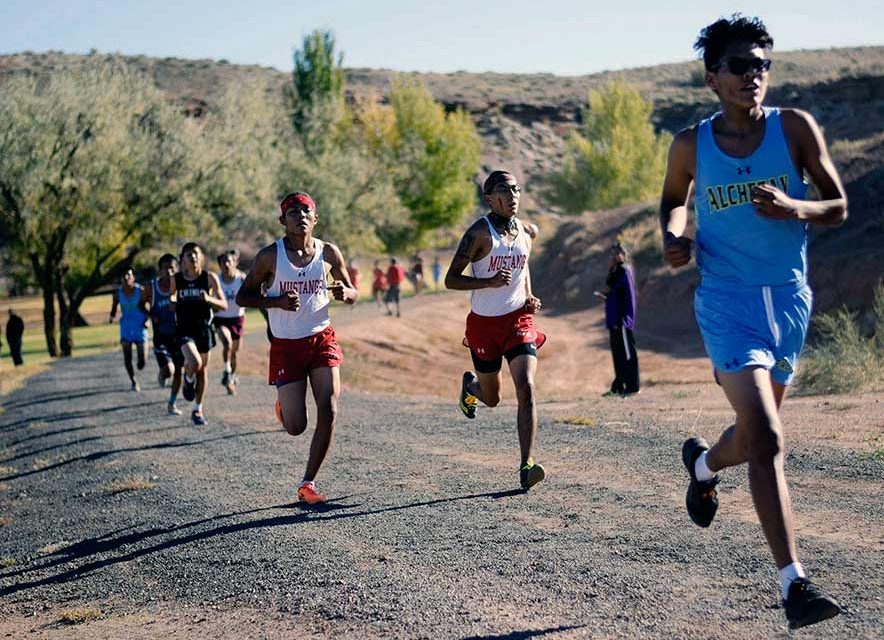 File photo
In this file photo, two Monument Valley runners try to keep pace with an Alchesay runner at last year’s Holbrook Invitational. The athletic directors from the northeastern Arizona schools in the 1A, 2A and 3A conferences have sent a proposed plan to the Arizona Interscholastic Association to offer all high all school sports with a shorten season in 2021.

As COVID-19 cases slowly decline, school officials have a better idea about what they’re facing. The athletic directors of the Northeastern Reservation Schools from 1A, 2A, and 3A conferences have sent a proposed plan to the Arizona Interscholastic Association for the coming spring season that not only offers spring sports but a shortened season for sports normally held in fall and winter.

With the complication of different regions of Arizona experiencing varying degrees of COVID-19 cases, it makes it difficult to plan or host any games in the future. This is no better observed than on the Navajo Nation, as many schools have their campuses closed along with their sporting activities.

Athletic directors, along with their respective superintendents, school officials, and guidelines from the Centers for Disease Control and Prevention have put together a plan for hosting a spring season in the year 2021, along with classes and other possible activities as their individual communities adjust to the ongoing pandemic.

“I think the seed was probably planted after we lost our spring season,” Roe said. “We talked about it here and there between some of the AD up here, ‘What is it going to look like up here?’ ‘Are we going to lose another season?’

“We got kids that are one-sport athletes, and for them to lose the opportunity to participate in their sport, that was something that we were taking into consideration as well. So we start thinking more and more while the AIA decided to move forward with their fall sports, and we said, ‘You know what, let’s start coming up with a plan where we can help our students, what’s best for our students and our community and provide for their opportunity,’ and that’s what we did.”

Window Rock High School Superintendent Shannon Goodsell made it clear that student safety is paramount to their discussions.

“Realistically, I would like to encourage everyone to be vigilant and practice good behavior regarding the COVID-19 virus, and that includes following all of the CDC guidelines,” Goodsell said. “Public safety is everyone’s responsibility.”

The plan that the directors put together not only outlines safety procedures and planned competition between the northeastern schools but also proposes having fall and winter sports during the spring season. This is a lot to put in one season, so the current plan is that each fall and winter sport will only have a “short season,” which will be a smaller season than usual while the spring sports carry on as they traditionally have. Also, the schools will only be competing against one another in the northeastern region with no plans to compete with other schools in the south.

The plan is the project of many directors, including Ryan Dodson, AD at Window Rock High School.

“Window Rock is the president of the 3A North conference, and so we have been trying to develop a plan that if the pandemic is under control, and if our students are safely able to come back to school, then what could potentially athletics look like this school year for those schools that are interested in participating in the spring?” Dodson said. “And because we didn’t want to lessen the significance of any sport and we wanted to honor every sport, what we decided to do is to have shortened seasons so that all kids can get exposure to their athletic activity.”

The proposal is to go before the AIA executive board Monday. All northeastern ADs are invited to sit in via Zoom. Dodson will be speaking on the northeastern schools’ behalf, with Roe and AD Ernie Rivers from Page High School providing supporting documentation.

“So again, the executive board of the AIA is going to determine if it’s OK for us in the Northeast to have a separate schedule, cause right now all the other schools in the state that are currently practicing and competing, they are on what is called the standard AIA calendar,” Dodson said. “So essentially, we’re asking for a reprieve from the standardized calendar the AIA puts forth every year.”

Whether the AIA agrees or not to the proposal, if the individual northeastern schools feel comfortable about having in-class lessons again as well as sporting activities, then they will proceed as planned. The schools would like the AIA approval, though, so that the organization could continue supporting the region’s sports and provide officials who can preside over the events. Roe comments that it looks likely that the AIA will agree with the proposition.

“Just based on some of the discussion we have, it does sound positive. I just don’t know how the executive board is going to feel about it,” Roe said. “I know two or three of them that I talked to who are positive and for it because we have been hit hard up here, and we want to provide a sense of normality that we can give these kids and our community for that matter. There’s a good possibility for the plan to pass.”

However, this is no guarantee of there being a spring sports season. This is only the first step. If COVID-19 cases are low, student safety is maintained, and if the students feel confident, then the schools can move forward.

Goodsell speculates that the earliest we can expect a confirmation of there being a spring season will be in late November around Thanksgiving or early December.

There is still much that has to be discussed among the northeastern schools, the most recent discussions having to do with whether fans should be allowed attendance or not. There are also the logistics of transporting students and ensuring their safety from the virus. Such decisions are still ongoing but should be resolved in time for the spring season if approved.

It is unclear if there will be a 2020 state title for any sport in Arizona, as the 3A regions aren’t the only school conference struggling with the pandemic. However, Roe stated that this will provide an opportunity for students to continue what they love despite the current hardships.

“That was the whole reason behind the plan,” Roe said. “We wanted to give our fall athletes an opportunity to play in their sport because our spring sports last year lost their whole season, and I felt really bad for the seniors, but it was for their own health and the well-being of the community and their families.

“Sports helps them with their well-being,” Roe said. “It’s been very tough as I have lost coworkers and friends to COVID-19. It touched me personally, and I have to get out and get some exercise on my own because it does wear on you. I also know that our kids are very social and very impressionable at this age. So, we’re trying the best we can do for them.”

With athletes, particularly seniors, depending on a season to play in so that they can get potential scholarships and college contracts, this may be their chance. Also, playing the sports that they love may help them to continue their growth into adulthood.

“So overall,” Dodson said. “I think, yes, athletics does play a role, an important role in the development of students within schools but even more important when we take a look at the pandemic, I think it offers an opportunity for student-athletes to live a healthy — physically healthy —lifestyle in conjunction to a good diet, and just good habit. And overall, that’s the basis of what we’re trying to do as AD.”