With a common goal of bringing a new Navajo art gallery to Gallup, silversmith Philander Begay and Southwest art and real estate mogul Bob Sahd have teamed up to open the R.C. Gorman Navajo Gallery in the downtown arts district. 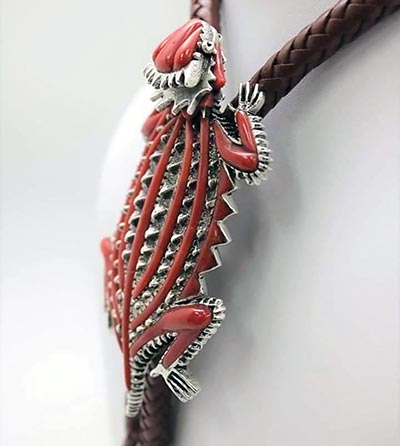 SUBMITTED
A coral horned toad clings to a bolo in this piece by silversmith Philander Begay. Begay’s work is featured in a new gallery in Gallup.

The gallery will showcase the work of the late world-renowned Diné artist Rudolph Carl Gorman and Begay, along with a few other guest artists. Begay says the collaboration is a dream come true. “I been talking about this for a while and me and my wife have been looking for a shop downtown,” said Begay.

The idea came to fruition quickly last week when Begay found a vacant large gallery space on West Coal Avenue and Sahd encouraged him to move forward with securing it. “Everything just came about within a week,” Begay said. “It was meant to be.” Sahd said he is excited to open his 15th R.C. Gorman Navajo Gallery in Gallup, the “Indian arts capital of the world.”

While the original R.C. Gorman Navajo Gallery still exists in Taos, other locations include Santa Fe, Albuquerque, Sedona and Scottsdale, where Sadh lives. A self-proclaimed billionaire, Sahd says he has long admired Begay’s work, which is why Begay is the featured silversmith in every one of his galleries.

“Philander is a great jeweler,” said Sahd. “I’ve been buying jewelry from him for the last 10 years.”

The opening of the gallery in Gallup is a natural progression of their business relationship and friendship. “We decided to team up and do a joint venture,” said Sahd, who will be the financial backer.

“I have a lot of faith and trust in Philander, and I view him as a young man who is very, very creative.” Born and raised in Taos, Sahd said he came to know Gorman and bought his estate after he passed on.

“Everyone knew Gorman,” said Sadh. “When he died, the estate went up for sale and I bought all of the intellectual property rights and everything he owned. “He was one of the best artists in the world,” Sadh said. “He was considered the Picasso of Native American art.”

Originally from Chinle, Gorman was raised primarily by his mother and grandmother, and that is why he mostly painted women, said Sahd. His father, Carl Nelson Gorman, was a Navajo Code Talker, added Sahd. Now Gorman’s paintings and sculptures are in museums all over the world. Begay tells the story of when he first met Sahd by chance on a street in Scottsdale and ended up being invited to the R.C. Gorman Navajo Gallery there, where Sadh purchased all of the jewelry Begay had on hand.

“From there, our relationship just took off,” said Begay. “Bob is like an uncle. He kind of adopted my art.”

Similar to Gorman, Begay started drawing traditional scenes as a small child growing up in Round Rock, Arizona. By the time he was 20 years old, Begay had a family of his own and worked in construction to make ends meet.

However, he began to worry that he wasn’t devoting enough time to his young children and began to look for a new direction that would allow him to spend more time at home. At this juncture, he worked for his cousin, master artist Darryl Dean Begay, for a few months. He taught Begay the basics of tufa casting. That experience influenced him to start on the path of becoming a jeweler himself.

“I realized I could do this,” said Begay. People soon started taking note of his work, he said. “They were amazed by it,” he said. “They said, ‘You’re going places.’” Begay’s work started selling and that was when he realized he could devote all of his efforts to jewelry making.

His first entry into the Santa Fe Indian Market in 2007 earned him a major award – a blue ribbon for an intricate silver Yei Bi Chei concho belt. Now 38, Begay has achieved his own level of mastery as a well-known silversmith with clients all over the world.

He lives in Gallup with his wife, jeweler Shanibah Begay, and their six children. Their two oldest sons, now teenagers, have also grown into established jewelers who have their own following.

Begay believes what distinguishes him from other artists is his versatility and ability to bring to life scenes of Navajo in his work. He said his tufa carvings and jewelry depict a “realism,” which stems from his early experience in drawing and painting traditional Diné imagery. “I capture images in metal,” he said. “I do all kinds of styles and techniques. I’m always pushing myself.”

As the featured artist at the new gallery, Begay will manage the operation and work out of his studio there. Over time, Begay plans to start teaching classes at the gallery, including tufa casting, inlay, and soldering techniques, so that he can share his skills and experience with others.

Begay said that while Sahd wanted the silversmith’s name on the gallery side by side with that of R.C. Gorman, he wants to stay behind the scenes. “I want to stay humble,” said Begay. Begay and Sahd are aiming to have a soft opening of their new gallery by the end of October, and a grand opening by the end of 2020.

Like everyone else, they are hoping for the pandemic restrictions to subside, but meanwhile, they are forging ahead. “We believe in the art world so we’re going to keep going,” said Sahd. Begay said despite the slowdown in the art market, his family has fared better than expected through the pandemic. “We’re actually doing pretty good,” said Begay. “I’ve gotten a lot of orders. I think the customers know there’s a pandemic and they want to help us through this time.”

Now they are all making inventory for the gallery’s grand opening, he said. “We’re working like elves at the North Pole,” chuckled Begay.