When he was three years old in 1993, Rudy Yazzie was diagnosed with a rare, life-threatening illness.

“It just broke our hearts,” said his dad, Rudy Yazzie Sr., originally from Twin Lakes, New Mexico. “We didn’t know how to take it. Then there’s a time in your life, you just have to accept it and do all you can to be by his side.” 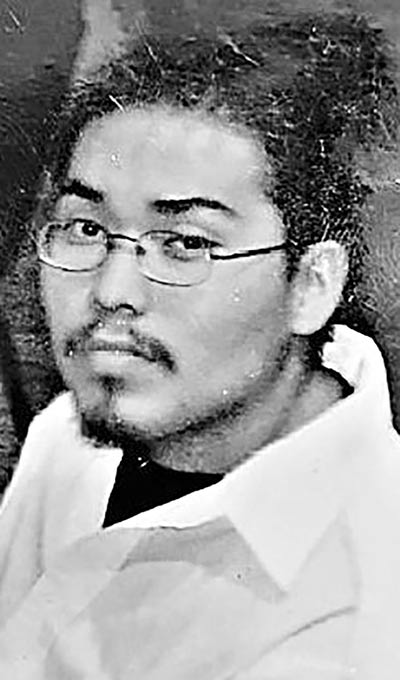 The condition he was born with is called familial hypercholesterolemia. His liver wasn’t able to process cholesterol.

He is the first member of the Navajo Nation to have this condition and the second Native American. A Seminole child died of it when she was 10 years old. Doctors told Rudy’s mom and dad that Rudy had the same prognosis.

But with evolving treatments and support of his family – his dad, mom Jeanette and younger sister Jayme – they fought the disease together.

As a young child, he underwent treatments similar to dialysis to take the cholesterol overload out of his body, then the family traveled to the National Institute of Health hospital in Bethesda, Maryland every year until he was 12.

At other hospitals, he received a liver transplant, open-heart surgery to replace a heart valve and then intervention when his liver transplant was rejected. One of his last major treatments took place this past May in the midst of the Covid-19 pandemic.

His dad said his NIH doctors called Rudy a “medical miracle” for living long past the average lifespan for his condition, which was 10 years.

“They gave him the nickname of ‘Iron Man,’” he said.

But despite Rudy’s and his family’s diligent efforts, complications from the unrelenting hyper-cholesterol condition took his life on March 12. He was 31.

Throughout the family’s battle that spanned nearly three decades, Rudy never gave up.

“He never complained,” his dad said.

Instead, he appreciated the happy things in life: his family, his dog named JoJo, his big white Chevy truck he drove around town, playing basketball and corn stew.

Inspired by his father, who had an auto mechanic shop in Albuquerque, Rudy secured a business license to sell jewelry he made.

Rudy also went on to higher education, earning an associate in liberal arts from Central New Mexico College, followed by a bachelor’s degree from the University of New Mexico.

At UNM, he joined the Kiva Club, the Native American student organization.

Demetrius Johnson, also Diné, remembered Rudy fondly and was deeply saddened when he heard of his passing.

“He was a role model to me,” said Johnson, remembering how Rudy wore his hair long and tied it up in a bun.

“Back in the day, there weren’t a lot of Native men who I knew who had long hair,” he said. “Rudy inspired me to grow my hair out too.”

Johnson said he turned to Rudy when the club needed information on laws, policies and current information impacting Indigenous students and communities.

He also did all he could to help the Kiva Club.

“When we had bake sales and any club efforts like making signs and posting them around campus, he was always there,” he said. “I remember one time around Nizhoni Days Powwow, we had to be there from 7 o’clock in the morning until the evening and Rudy was one of those people who was there with us,” Johnson recalled.

“He was generous, compassionate and understanding,” his dad said. “He used to give health advice.

He added that his son was especially concerned about the impact of alcohol use.

“He told his friends who liked to drink they shouldn’t do that because it ruins the liver,” he said. “He knew what it was like when your liver is ruined.”

Rudy’s sister, Jayme, was also inspired by him. She earned a bachelor’s degree in biology.

Throughout the years, Rudy Sr. said his son always stepped up to help the family whenever he could.

Last May, Rudy, posting on a GoFundMe account, sought support for travel expenses for his family, who live at Hunters Point, Arizona, while he underwent treatment at a Colorado hospital.

“I will use the funds for food, traveling and lodging cost for my father who will be assisting me while I’m recovering in the hospital,” he said. “The funds will also go toward my 6-year-old daughter’s care while I’m away from her since I can’t take her with me.”

His dad said his rare medical case helped other children.

“He gave a lot of information to the top doctors at NIH,” said Rudy Sr. mentioning that after years of treating Rudy, NIH developed a new cholesterol medicine.

Along with his mom, dad and sister, relatives, clan relations and friends, Rudy sadly leaves behind his daughter, who is now 7 years old.

His dad said that if ongoing treatments had been successful, Rudy looked forward to continuing his education learning about the stock market and securing a home-site lease on the Navajo Nation to build a home for himself and his daughter.

“President (Albert) Hale had given him a waiver for living off tribal lands while receiving medical treatment,” Rudy Sr. said.

Remembering his friend, Johnson said, “What comes to mind is how important it is to take time with relatives and friends. It’s shorter than you think.

“I’m appreciative of what Rudy taught me and the friendship he extended,” he said. “I’m grateful to him.”

Rudy Sr. said, “Don’t be afraid if your loved one has a rare illness, just do what you have to do to help them, be by their side. Every minute is precious.”