Yes, heartworm exists on the rez 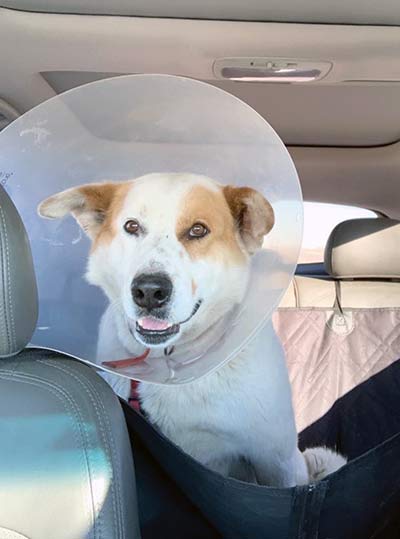 It sounds like the stuff of science fiction, but for dogs and cats, heartworm is far too real.

It’s not something we tend to worry about in the parched deserts of the Navajo Nation, because it’s spread by mosquitos. But a Toadlena, New Mexico, woman got a rude awakening last December when her rescue dog, Melon, tested positive for the microfilarium.

“I had never really worried about heartworm,” confessed Maureen Bohler. “I’d seen the Heartgard (prophylaxis) at the vet and just figured if a dog gets it, you give him this little pill and he’ll be fine.”

As Bohler discovered, that’s not how it works. Heartgard and other prescription medications are excellent preventatives, but once a dog actually has the worms in his system, getting him clear takes months and hundreds of dollars. Melon is only now worm-free.

“The problem is, you can’t kill the worms all at once,” explained Carmelita “Carm” Bitsoi, a senior Extension agent assigned to the Navajo Nation’s Shiprock Veterinary Clinic. “The dead worms floating around in the arteries can clog them and kill the dog.”

Instead, the dog (or cat — it’s rare in felines but it can happen) gets a mild dose of the medicine at his first visit, then another dose in a month, and then another one a few days or weeks after that. During this time, the dog isn’t supposed to run or jump.

“We recommend you keep them in a kennel with just enough room for them to use the restroom,” said Bitsoi.

That wasn’t easy for the large, rambunctious and social Melon. “It was really hard on him, me and Millie (his dog buddy),” said Bohler.

Fortunately, San Juan Veterinary Hospital in Farmington caught Melon’s condition early, and he has made a full recovery, but that’s not always the case. “There are four basic stages of the worm’s life,” noted Bitsoi. “Once they get to Stage Four, it’s usually fatal.”

Bitsoi said the Shiprock clinic usually sees heartworm in dogs that grew up near the San Juan River or another large body of water, but that’s not always the case. “We’ve had cases from Lukachukai, Rough Rock and Chinle,” she noted. “It’s really a good idea to have every dog tested when it reaches a year old, and if it doesn’t have the microfilariae in its blood, start them on the monthly preventative.”

“I’m telling all my friends to do it,” said Bohler. “It’s such a horrible disease, and so easily prevented.”