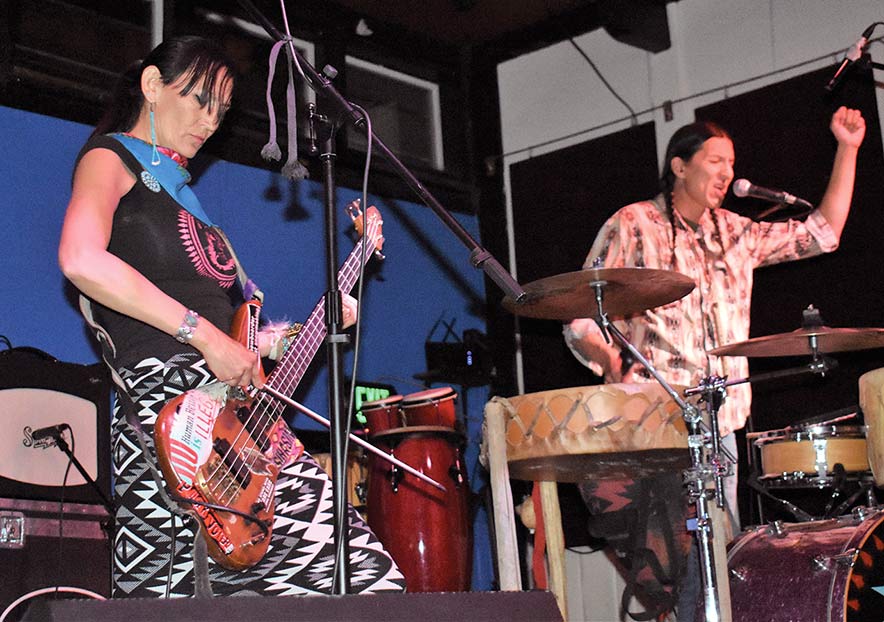 Diné punk/rock/world sibling duo Sihasin brought home a win for the Navajo Nation when they were awarded “Best Rock Recording” for their album “Fight Like a Woman” at this month’s Native American Music Awards.

“Being recognized for your art feels so good, especially when it’s so personal,” said Jeneda Benally.

“To create music with my sister Jeneda — there are no words,” said Clayson Benally. “We don’t set out to become role models yet this is the only way to express what Jeneda is to me — powerful, determined, beautiful.”

Jeneda said she accepted the award at the Nov. 2 ceremony in Niagara Falls wearing a bright red gown in honor of missing and murdered indigenous women.

Born in the 1970s into the heart of the Navajo-Hopi land dispute on Black Mesa between Forest Lake and Big Mountain, Jeneda and Clayson learned early on about oppression and exploitation brought on by the government and the corporatocracy.

“I grew up really understanding that there was a lot of injustice in the world,” said Jeneda.

“Most people in America think that the Indian wars are over but they don’t realize that, no, it’s just that the tactics and the strategies have changed,” she said.

Clayson said that the location of his umbilical cord was uprooted when a bulldozer made way for the fence that partitioned Hopi and Navajo lands.

“Black Mesa is where I’m from, my connection to this earth,” he said.

They watched their elders resist and fight to protect their way of life and their homelands, including women like their grandmother Roberta Blackgoat, and Zonnie Benally, Pauline Whitesinger and Katherine Smith.

“All of these incredibly powerful matriarchs from our region were really utilizing their voices,” said Jeneda. “I grew up understanding that was important.”

The album’s title track “Fight Like A Woman” is a tribute to those matriarchs who still inspire them.

“Some of these women were so eloquent and beautiful in the way that they fought,” said Clayson. “We wanted to bring forth their strength.”

Clayson said some people say women cannot be leaders, but he argues that in Navajo there are White Shell Woman, First Woman and all of the important women leaders in history, some of whom went to Washington, D.C., on multiple occasions to fight on behalf of their people.

Jeneda said “Fight Like a Woman” is more than a song and an album. It’s a call out to every woman to recognize her own power.

‘It was about survival’

Jeneda and Clayson’s father, Jones Benally, a Hataalii and champion hoop dancer, and their mother Berta Benally, a folk singer/political activist, didn’t want their children sent off to boarding school when they lived on the reservation.

“It was about survival and protecting us,” said Jeneda.

The only option for them was to go to school in a border town so the family moved to Flagstaff, but never accepted relocation housing as an act of resistance.

As children in Flagstaff, Jeneda and Clayson learned quickly that discrimination toward Native Americans was prevalent, which shaped their youth and ultimately their music.

“Just being different, or ‘other,’ was a challenge because there was a lot of racism,” said Clayson. “Back then it wasn’t cool to speak your language.”

He said there was a lot of border-town bullying and pressures to conform like people wanting him to cut his hair.

“With anything I wanted to accomplish, I had to assimilate and change my identity in order to participate,” he said. “That was something I never gave in to.”

“Diné Bizaad was my first language,” said Jeneda. ”At school that was taken away from me.”

She was told her Diné accent was too thick and that she would never be able to succeed in life because of it.

“I grew up in this dichotomy of understanding how beautiful and powerful our language and our culture is, but also feeling the racism of people telling me that our culture was not right,” she said.

Throughout their childhood, Jeneda and Clayson went home to Black Mesa on the weekends and helped their dad and other practitioners with ceremonies.

They recall the long drives when their dad used to sing Navajo songs to them in his truck.

“We’d be singing the whole way, so many songs,” said Clayson. “For me, that’s the foundation of where our music starts.”

Jeneda says some people think that you have to choose between a traditional and a modern world, but she believes it’s possible to bridge both.

“It’s a parallel path of healing,” she said. “We use our traditional sciences and contemporary tools as healers.”

Jeneda said growing up the children of a Hataalii, one understands the power of one’s voice to heal and to tell story.

She said with that foundation and a mother who is a singer/songwriter, they experienced a “confluence of cultures” that was marked by the constant that voice and song are powerful.

Since their youth, Jeneda and Clayson also danced the traditional Navajo way and in powwows, performing with their father all over the world.

The Jones Benally Family Dance Troupe is still active today and has expanded with their children.

Jeneda says that everyone experiences different kinds of traumas in their life and while it’s easy to feel isolated, we’re not alone.

“Your story is unique, but the trauma is not,” she said. ‘We all experience it in different ways.

“This identity that I carry with me as a Diné woman is that I am healing from trauma but I’m also allowed to be a healer,” she said, “and I’m grateful for that.”

Jeneda says despite moving to Flagstaff, she has always felt like Black Mesa is home.

“That’s where my heart is,” she said.

Today, she believes the greatest act of resistance they can have as the younger generations of the relocation trauma is to move back to their homeland in Black Mesa.

“That’s what we’ve been doing,” she said. “We’ve been rebuilding our hogan. We are working on creating a space so that our children know where their home is.”

By the same token, she points out that Flagstaff also still qualifies as their traditional homeland.

“I refuse to acknowledge that this land that was stolen from us here in Flagstaff and these border towns is not our indigenous homeland,” she said. “Us reclaiming being here is really important, not only to the cultural landscape that we belong to, but also to our ancestors.”

Clayson says the band’s punk rock elements came from being an indigenous person in a border town where you are essentially “pushed to the fringe.”

“Punk is this natural fusion of being an outcast and a rebel,” he said.

The name “Blackfire” emerged from the black smoke they saw coming from the Peabody coal mine on Black Mesa, said Clayson.

“It was like evil smoke and there was a duality in that, because smoke signals are also created by extinguishing fire,” he said.

“Black fire is a warning that the enemy is approaching,” he said. “That’s what the mine was with the degradation of our culture and our language.”

As they matured into adulthood, Blackfire’s politically charged lyrics and “alter-Native” sound reflected their experiences of an unjust world, and they were revolutionary in their own right.
Jeneda says they were rightfully angry because of everything they were facing and music provided a vehicle for expressing that.

“We were watching our elders in the courts, in the (Navajo Nation) Council, BIA meetings,” said Clayson.

Nobody was listening, he said.

“Our elders would be crying, shedding tears, and dying secretly of despair and depression,” said Clayson.

Their hard-driving commentary on a colonized society, infused with Navajo and inter-tribal elements, was one-of-a-kind and drew international attention and appeal.

“It was always about being original and being true to your own voice,” he said.

Jeneda says for her punk music is pure emotion.

Blackfire was one of the first Navajo punk bands that paved the way for the younger generations.

“We had to create our own scene and our own movement,” said Clayson.

They also created their own standards and values such as “no drugs, no alcohol, no discrimination of any kind,” said Jeneda.

The elders told them to follow the Beauty Way and it was all about inclusiveness.

“Those were the guidelines our grandmothers established for us,” said Clayson.

In 2011, Klee dropped out of Blackfire and the band broke up in the midst of some extreme challenges they were facing “fighting injustices on the front lines of music,” said Clayson.

An example of that was when they sued the federal government and the Forest Service in 2011 to protect the holy Dook’o’ooslííid (San Francisco Peaks), its ecosystem, and future generations from endocrine disruptors in reclaimed wastewater used to make artificial snow.

“We lost that battle,” said Clayson.

“That was a pivotal moment, losing the case and having the ski resort trying to sue us,” said Jeneda. “They threatened us. They said ‘We’re going to take everything from you.'”
She said the experience was devastating.

“It silenced our voices,” said Jeneda.

“I realized after we lost our court case that there was no justice in the legal system,” she said. “Our case was not heard on the merits.”

“It was ruled on by technicalities,” said Clayson.

He said that was the juncture at which they learned what “justice” looks like off of the reservation and how they were viewed as indigenous people in the court system.

Coinciding with that, a wave of youth suicides on the Navajo Reservation also had a big impact on them.

“It broke my heart,” said Jeneda.

“Realizing, why is it that these children have no hope? What have we done as adults to fail them?” she said.

Jeneda, who was already a mother, said it was the most trying time of her life and she realized she had to make a change.

“I came from this place of anger and grief,” she said. “I realized I did not want that to be my path anymore and I needed to heal.”

Jeneda and Clayson asked themselves, what comes after anger?

The answer was “hope,” they said, which gave birth to Sihasin, the Navajo word for hope.

“We decided we were going to turn everything around,” said Jeneda.

With Blackfire they had used music as a tool to educate people about injustices, but in the Sihasin chapter of their lives they wanted to empower and inspire people to “be the positive change that they wanted to see,” said Jeneda.

In the transformation to Sihasin, Jeneda and Clayson started to sing lead vocals, still with a dominant Native/punk edge.

“I realized there was a liberation in being able to sing my emotions,” said Jeneda. “It was part of my healing process.”

Jeneda says “Fight like a Woman” is the most personal songwriting that she and Clayson have ever done.

“We’ve always written songs that were about being champions for change, but this album is different,” she said. “I’m showing my heart and my soul and everything I’ve been through, my journey, to the world.”

Clayson says for him songs are comparable to chapters in one’s life.

“Once you’ve created a song you can move forward,” said Clayson.

”It’s not yours anymore. It’s a gift that goes to the world. You create a sound wave. Where it goes, it’s absorbed.”

Jeneda says she remains incredibly grateful to be able to create music and platforms with Clayson.

“My brother supports me and pushes me further when I’m feeling scared or intimidated,” said Jeneda. “I wouldn’t be half the person I am without him.”