‘Our own expectations’: Rippy and the Sillyettes grow from 3 songs to a band 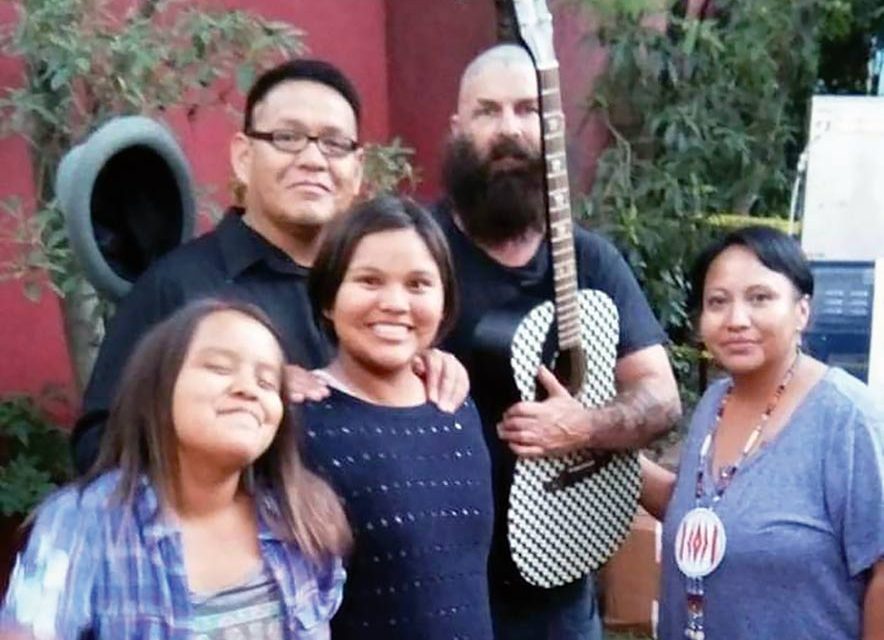 With three songs prepped for their first performance at the Rio West Mall five years ago, Rippy and The Sillyettes never imagined the places they’ve traveled to perform.

The band comprises Rippy Williams, 44, and his daughters Lily, 16, and Lola, 14, Williams.

“It was actually going to be called ‘The Silhouettes,’” Rippy said. “I think that was what they wanted to name the group. I thought it was silly.

“And it was Lola that said ‘Silly-ettes,” he said. “‘The Sillyettes.’ Then Lola said, ‘But you’re not an ‘-ette’ dad.’ That’s when they said, ‘We’ll put your name in the front.’ We had just seen this movie called ‘Rikki and The Flash.’”

The girls suggested Rippy and The Sillyettes. The group has been performing together for five years with a hiatus of almost a year.

“At the time that was all we had,” Rippy said. “The songs were ‘Sherry’ by Frankie Valli, ‘Hat’s off the Larry’ by Del Shannon and ‘This Magic Moment’ (by Ben E. King and the Drifters.) Those were only the three songs that we knew and all three songs have the same four chords so it was easy to teach (Lily).” 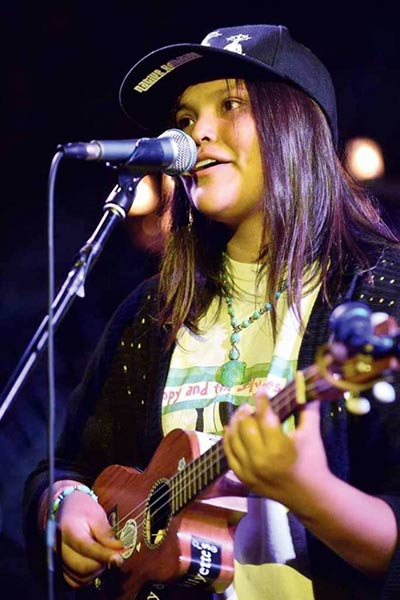 Courtesy photo
Rippy and the Sillyettes singer Lilly Williams, 16, performing with her Ukulele.

You would think learning to play the same chords for three songs would be easy but it proved difficult in the beginning for Lily. She was frustrated early on with learning one chord.

“I’ve never played an instrument at the time so it was hard for me push down on the strings,” Lily said. “I remember I cried a few times because I was frustrated.”

Rippy encouraged her to continue practicing on the one chord daily until it got easier, which it did. Being a father meant encouraging his girls to do their best.

When it came to recording their music, they carried their own expectations and would expect to do their parts in a single recording session.

“I tell myself this and that, ‘practice doesn’t make you perfect, it makes you better,’” Lily said.

“When we would record, they would get strict on themselves because they wanted to do it all in one take,” Rippy said. “Steven Blackgoat was the one who recorded us (for a demo). He would tell them, ‘We will take as many takes as you guys need. Just calm down and let’s get this done.’”

That recording was called “The Bologna Sandwich” album, which they sold independently thanks to Blackgoat’s recording sessions.

“As a band we have our own expectations for us to practice on our own time so that when we practice as a band, we would want to get our parts down,” Lily added. “I guess it’s us having that responsibility for each other.

“For me that taught me to be a little more responsible for myself because I know if I mess up (Lola) would get mad at me,” she said.

“She would give us ‘that look’ when she knows we messed up,” Rippy chuckled.

Now the band can add recording an original song penned by Lily titled “One in a million,” which was recorded at The Shipwrecked Recording Studio in Hollywood.

They’ve performed as an opening act for heavy metal band Soulfly in Kayenta for Treaty Days, at the Rock the Canyon Music Festival in Shonto Canyon, and they were invited twice to perform in Los Angeles in MUSACK’s Rock n’Roll Music Festival.

The Native American Music Fund is a nonprofit that held monthly music workshops once a month at the Navajo Nation Museum before the coronavirus pandemic. The organization is founded and managed by Mechelle Morgan-Flowers and invited local musicians to host teaching clinics for various instruments.

Rippy and his daughters had an opportunity to teach others the guitar, bass, ukulele and drums. It was through a performance at the Morgan-Flowers residence that got the band invited to Los Angeles to perform at the Rock n’ Roll Music Festival. It was through MUSACK founder Donick Cary, writer-producer for the Letterman Show, the Simpsons, Parks and Recreation and Silicon Valley, who was in attendance during one of MUSACK’s trips to distribute musical instruments to the music fund.

Rippy and the Sillyettes were invited to perform in 2018 and 2019. They were scheduled to return a third time but then the pandemic struck.

At the 2018 MUSACK Festival, Lily was backstage looking for her tuner for her ukulele but couldn’t find it. She had 20 minutes before she was to perform with her band.

“Then this guy with a long beard loaned me his,” Lily said. “It was a really nice tuner. It was white and it looked like it was expensive.”

The strings on the ukulele lose tone due to change of climate and Lily noted that on the Navajo Nation it’s drier so tuning is not as frequent.

“Yea, it looked really expensive,” Rippy said. “I knew we had to find out who it belonged to so we can return it but she didn’t know who he was. Just he had a beard.”

Little did she know it was Tim Armstrong, of the punk band Rancid, who loaned her his tuner.

After their MUSACK performance in 2019 Armstrong invited the Sillyettes to join him in a studio.

“Tim asked us if we could stay a few days longer but I told him that we were leaving that following morning,” Rippy said.

Armstrong was insistent so it was added to the schedule. 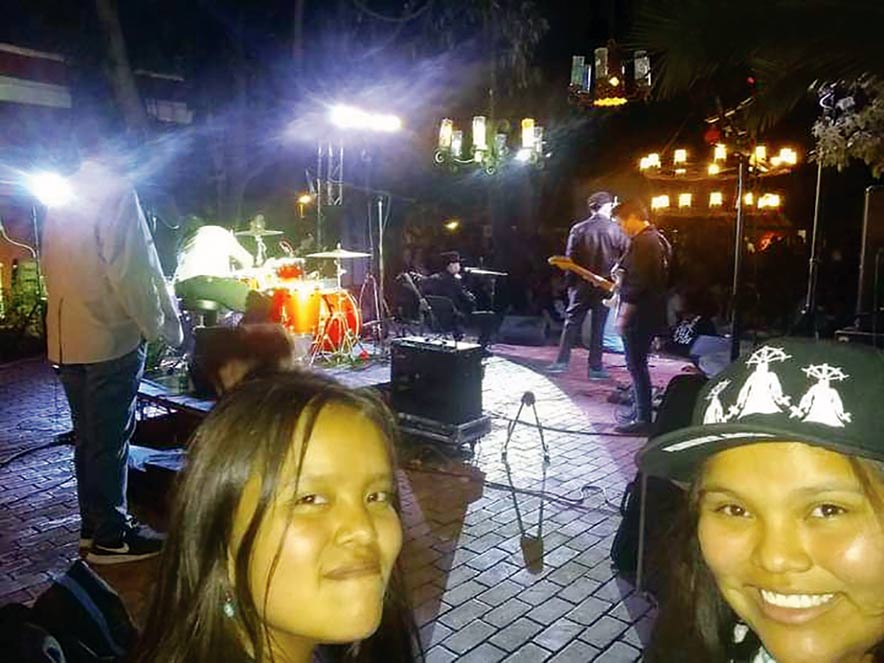 They met at the studio where Armstrong was working alongside others in a punk-rock supergroup called The Krew. Other members include Mike Muir of the Suicidal Tendencies, Fletcher Dragge and Byron McCracken of Pennywise and Rancid bandmate Matt Freeman.

The band was working on their single “One Voice” on Epitaph Records.

Lily’s song was recorded at the studios where Lola and Rippy recorded their parts in one take. Lily admitted she was nervous because of the pressure of being in a professional studio with Armstrong and his staff present.

“I was really nervous,” Lily said. “It was until I saw Randall (Hoskie) and his family come into the studio. I felt a lot better when I saw them all.”

“To me that was the icing on the cake,” said Hoskie, of Rancid-Savage Promotions. “I’ve always said that there is a lot of talent on the reservation. It was really good seeing (Rippy and the Sillyettes) in the studio. We’ve been trying to get out musicians out and heard beyond the borders of the Navajo Nation.

“Tim, he didn’t need to do it,” Hoskie said about Armstrong inviting the young girls out. “Tim is a really down-to-earth nice guy. He didn’t have to invite them out but he did.”

Hoskie and family had always been invited to music festivals and consider Cary to be a good friend. Hoskie heard the original recording of Lily’s song and noted that with the professional experience of Armstrong and staff the song is “a lot crispier.”

The song “One in a Million” is a B-side to the single The Krew released on June 1 and will be only found on the seven-inch vinyl.

Rippy and his daughters have yet to hear the finished recording as of press time.

Lily expressed her personal experience with friends she thought she had but was alienated, which made her feel down. Rippy encouraged them to write out their emotions when situations become too much to handle. In this case Lily did that and over time the song was completed.

Being youths with bullying being an issue on social media platforms and in school, the girls also experienced it in the local music scene when an older musician made unflattering comments.

To the critics Lily offered, “I like doing this. I don’t care what people say I’m going to keep doing it. I was only 11 years old when I heard stuff being said and it really hurt. It broke my heart and I kind of wanted to quit for a bit.

“It’s my style and it’s my music,” she continued. “(People) have their own style and I have my own style. People should be respectful especially since I’m just a kid.

“(People) shouldn’t be saying that to kids like me because back then at that age I was really emotional,” she said. “That really tore me apart but I would like to say that (people) should be a better musician themselves.”

“If I cared about what everyone is saying I wouldn’t be doing it,” added Lola. “But I don’t care because what I’m doing makes me happy.”

Rippy and the Sillyettes are scheduled to perform as part of the Ancient Ways Festival in Ramah on Aug. 7.