‘Voices of the Land’: Young composers’ music to be heard in East Coast homeless shelters 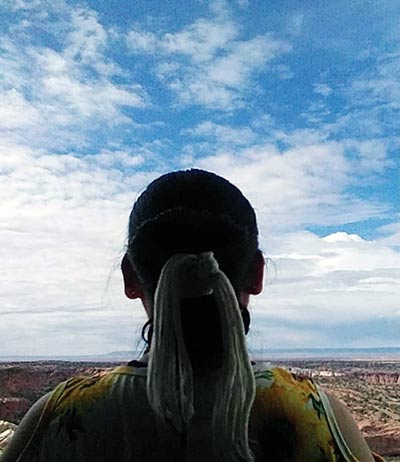 Perhaps it was inevitable that these two programs would one day converge. Thanks to that hateful little virus that’s messed up all our lives, they have.

“It was made possibly, sadly, by COVID,” said Julie Leven, founder of Shelter Music Boston.

“It was serendipity,” said Clare Hoffman, founder of the Grand Canyon Music Festival and its sub-program, NACAP, putting a more positive spin on things. “But with music, I find so often these things happen serendipitously.”

At any rate, through the magic of technology, music written by teens in the remote red rock canyons of the Navajo and Hopi reservations will soon be heard by down-on-their-luck folks in one of the country’s iconic cities.

Leven, who for 11 years has been staging live concerts by professional musicians in her city’s shelters, saw her program grind to a halt with the pandemic. But when she toyed with the idea of going virtual, she realized she could bring in music from anywhere … and reach a much larger audience.

A live concert, she pointed out, can only take place in one venue at a time. But a concert on video … “By clicking the link, it can go to 10 partner organizations at once,” she said. “We were able to increase our number of partners from eight to 26.”

Shelter Music Boston had always prided itself on its diverse repertoire. A concert might include a work by a local composer, something by Beethoven, a Latin American folk song and a 12th-Century vocal arrangement. But for this very different year, they needed something unique.

A cellist who performs for Shelter Music Boston introduced Leven to Diné/Latino composer Raven Chacon, whose cello solo she had performed in one of the shelter concerts. “Raven’s piece was like a Billboard 100 hit at the shelter because of the creative way he uses sound,” Leven recalled. “Even if they knew what a cello was, they didn’t know it could do THAT!”

Leven called Chacon to see if he would be interested in composing a new piece or two for a video concert. But Chacon was already swamped with other projects. “Raven’s a very generous person,” Leven said. “Instead of just turning me down, he turned the spotlight on others who needed the exposure.”

As it happens, Chacon is one of the mentoring composers for NACAP, along with Michael Begay, a NACAP alumnus who is emerging as a popular new composer in his own right. He turned Leven on to Begay’s music, along with that of another rising Diné star and NACAP alumna, singer Sage Bond. He also put her in touch with Hoffman, who resides in New York City when she’s not presenting the Grand Canyon festival.

When Hoffman heard what Shelter Music Boston was doing, she thought it was “extraordinary and wonderful.” Leven felt the same about NACAP. “We’re both classically trained musicians who want to bring this kind of music to unexpected places,” she said of herself and Hoffman, a professional flutist.

Leven had toured the Navajo and Hopi reservations years ago and was struck by the “500-year-old problems” the people were still facing, so giving exposure to Native musical voices stuck a chord with her as well.

Hoffman was the bridge Leven needed to some of the area’s newest voices: current NACAP students. “I’m very aware that for some white lady to show up and say to a bunch of Native teenagers, ‘Hey, I’d love to play your music at homeless shelters in Boston,’ it could be off-putting,” Leven said. “But Clare already had that relationship.”

Hoffman, for her part, was thrilled. Normally, the young composers get a concert of their music at the Shrine of the Ages before a live audience, but of course that didn’t happen this year. “The students we work with are so rural, so isolated … even more so in this horrible, horrible pandemic,” she said. “This is a way for them to be out in the world, so to speak. I’m just so grateful we can do this for them.”

Hoffman sent Leven several compositions, of which Leven chose the ones whose “emotional content spoke to me.” She asked each young composer to record a video of themselves introducing themselves and explaining a little about the music. Hoffman’s husband, musician Robert Bonfiglio, dubbed each student’s composition over his or her filmed introduction.

Some of the students recorded their introduction outdoors, so the city dwellers could see the vast landscapes of Dinétah or the Hopi mesas. “Each student’s video is a little work of art,” said Leven.
Chinle High School junior Thylia Yazzie, a first-time composer, was “very excited” when Hoffman emailed to let her know her string quartet “Farewell” would be played for homeless folks in Boston.

The piece is a sendoff for her late uncle, who died of COVID-19.

“I think it’s a piece everyone can relate to, because everyone’s lost someone or something,” Yazzie said in a phone interview. “But it’s also hopeful because of our Navajo belief, which is that death marks the end of one journey, but you go on living in other ways.”

Yazzie filmed her video at her aunt’s house on the rim of Little White House Canyon. “I wanted to show them the beauty of our land,” she explained. Meanwhile, Begay and Bond were each asked to compose new music for a trio of soprano, percussion and cello — an odd combination also brought to you by COVID.

“We had to find people who were in the same pod so they could record together,” Leven explained. “The soprano and percussionist are married, and the cellist is a good friend of theirs who is very quarantined and feels safe with them.”

All the music will be captured on a series of videos dubbed “Voices of the Land.” It will be available as a package to shelters come April, but if you’d like to view and hear the videos as they trickle in, subscribe to Shelter Music Boston’s YouTube feed. There is already one video up, that of Xavier Ben’s quartet “Nuclear Crystal.”

Normally, after a Shelter Music Boston concert the audience has some interactive time with the musicians to talk about the music and share their own stories. “People will say things like, ‘I want to listen to this at 3 in the morning when I’m all worked up and can’t sleep,’ or they’ll remember a time their grandparents took them to an opera,” Leven explained. “What we’re really doing is forging relationships through music and creativity.”

Unfortunately, this won’t be done on video because of the intense privacy policies most homeless shelters have. But Leven would like to have a Zoom meeting of all the composers, musicians and perhaps some of the shelter staff, so the young composers can get some feedback and answer questions.

Hoffman likes that idea. “It’s a way to get them out of the COVID bubble,” she said. The students will also be paid royalties for their music. “They’ll basically be composers in residence for Shelter Music Boston,” Hoffman said, “except they won’t actually be there.”

“It’s a jigsaw puzzle,” admitted Leven. “It’s a big experiment. But based on how beautiful every single piece is, I think it’s going to be a great collaboration.”