For 11 years their mother has been looking at their smiles frozen forever in time.

Del Lynn Peshlakai, 19, is standing on the right and her sister, two years younger than her, DeShauna Peshlakai, 17, is on the left. Both are looking into the camera. Their eyes are fixed on the lens.

Their lives were cut short on March 5, 2010, in Santa Fe by a three-time convicted DWI offender who was actually waiting to face a judge for his fourth offense.

The sisters and their parents, Darlene and Dave Peshlakai, had just left a basketball game at Santa Fe Indian School and were on Cerrillos Road getting ready to make the long trek home to Naschitti, New Mexico.

The younger Peshlakai still needed to finish high school at Newcomb High before pursuing a degree in pediatric nursing.

One of her favorite pastimes was spending time with her nephews and nieces, so it seemed a natural fit.

The older one, Del Lynn, enrolled at Fort Lewis College in Durango and was planning to surprise her mother with the news. She was supposed to begin school in the fall that year.
Their mother remembered her girls on Monday. 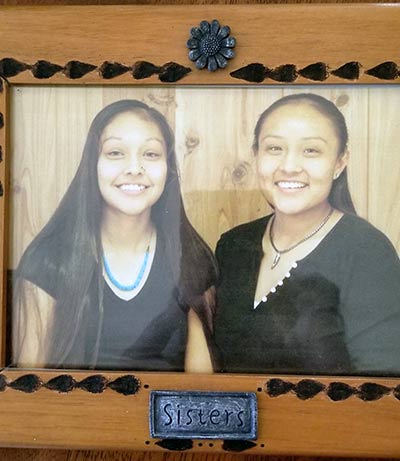 Courtesy photo | Peshlakai family
Deshauna Peshlakai, left, and Del Lynn Peshlakai in an undated photograph. The sisters were killed on March 5, 2010, in Santa Fe when a drunk driver rear-ended the car they and their parents, Darlene and Dave Peshlakai, were in.

Instead of being surprised with the news that “Del,” as her mother affectionately calls her, was starting college in the fall, and watching DeShauna graduate from high school in a couple of months, she found herself dazed and shocked.

Instead of celebrating the daughters, the family was planning for two funerals set for March 12. She and her husband were still healing from the injuries they sustained when the drunk driver slammed into the rear end of their car.

James Ruiz, according to court records, went on a drinking binge with friends on the same night the Peshlakai family were at the basketball game between the Newcomb Lady Skyhawks and the Santa Fe Indian School Lady Braves.

After drinking at the Applebee’s Neighborhood Bar and Grill and the Blue Corn Café Brewery, court records stated, Ruiz got into the driver’s seat of his friend’s Ford F-250 and got on the road.

The family was at the intersection of Cerrillos and Cristo’s roads waiting for the light to change when Ruiz slammed into their car.

“Ruiz ran away without trying to help the family,” the 2014 court document said.

The four-time DWI offender would eventually be convicted of vehicular homicide and causing great bodily harm by vehicle and sentenced to 40 years in prison in 2011.

Both Del Lynn and DeShauna excelled in high school. Both were National Honor Society members at Newcomb High School, both were active in sports.

Del graduated in 2008. DeShauna was a point guard on the Newcomb Lady Skyhawks basketball team, which is why the family traveled to Santa Fe, and was expecting her high school diploma in May 2010.

Since the loss of their daughters, the family has had to figure out a way to fill two empty chairs at the table with memories.

To heal, they’ve been proactive and have sponsored basketball tournaments, motorcycle runs and rodeo events in their daughters’ names.

Their mother chooses her words carefully when asked about what healing means to her.

She recalled during a deposition hearing, she was taught a harsh reality that to some “heal” was nothing more than a word lawyers representing the “opposite side” used as a weapon against her.

“I’m glad there was a big table between us (at court),” Darlene Peshlakai recalled. “The next thing you know I found myself climbing on the table yelling at her. I lost my lost my cool, you know, when (the attorney) said, ‘You know what, you’ll heal.’ She made it sound like, ‘Oh, you’ll get over it,’ you know?”

She reads the newspapers and struggles with stories of repeat offenders seeming to get off the hook, as well as new offenders.

“It’s just something that it means we need to still keep going,” she said, referring to drunk driving. “I don’t think it will ever go away.”

In 2010, according to the New Mexico Department of Transportation’s DWI report, a total of 2,162 alcohol-involved accidents occurred statewide, 131 of them fatal.

But when it came to fatal drunk driving-caused accidents, the report showed a steady increase since 2010, with the highest number of deaths being recorded in 2014, with 152 people losing their lives to drunk drivers. In 2018, the report stated 141 people died.

“We can try and reach some people and reach their mentality and influence how they feel about how they manage the kind of drinking they do,” Peshlakai said, “and hopefully teach them to not get into the car, you know, right after they drink. It’s everybody’s personal choice to go out, have fun, but just don’t get behind that wheel if they’re going to drink.”

“It’s not fun to bury somebody you love, especially if they’re still innocent,” Darlene Peshlakai said. “My girls were the ones that were still innocent, and they were killed by a person that was drinking while intoxicated. Only you can prevent driving drunk.”

The Santa Fe Police Department will conduct a small remembrance ceremony on March 13, at the intersection of Cerrillos and Cristo’s at 5 p.m., where the Peshlakai Memorial site is located.

Due to the COVID-19 pandemic, Peshlakai said, anyone attending the remembrance will be required to wear a mask, practice social distancing and not create a large gathering.