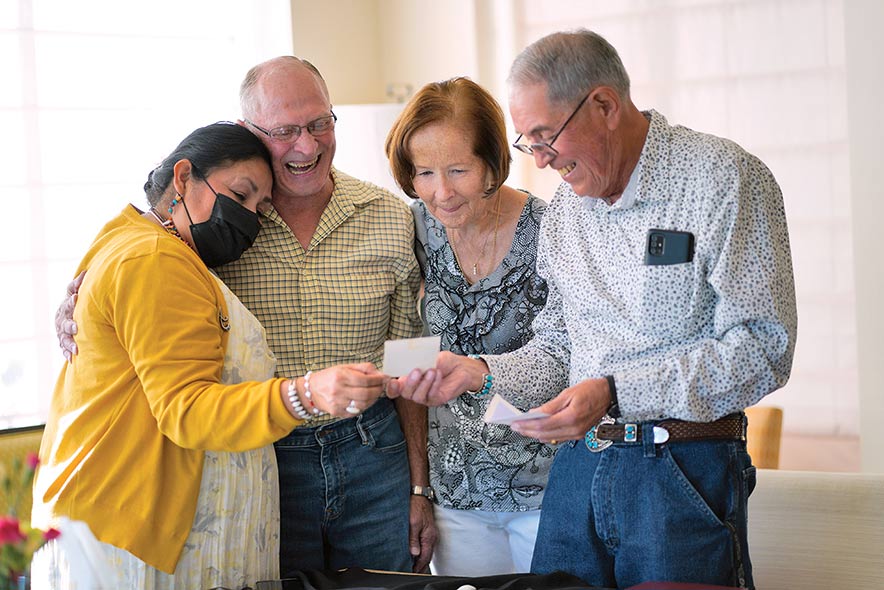 The war fused their friendship, and the spirit of brotherhood began.

It was 1969, and Tommy Moore was 21. Gary Denke, whom he had yet to call his brother, was 19. When their names were being called out to find out where to serve their military duties, he heard Denke’s name called out, and they told him he was heading off to Vietnam.

Both shipped out to Vietnam, and Richard Nixon became president. Nixon had promised he’d de-escalate the war by pursuing a withdrawal policy. But for the two boys, one from the Navajo Nation and the other from South Dakota, their contribution to the war was about to start.

Moore said they were split up when they arrived in Vietnam.

“And every chance we could get, we would come back together and hang out together,” Moore remembered as he and Gary stood with their arms around one another.

After their enlistment ended, the two left and returned to their homes. Moore said he returned to the reservation life and frybread, beans, and mutton. He later got into rodeo and traveled throughout Texas, participating in rodeo events in the 1970s and 1980s. Thinking Denke was from Texas, Moore said he’d often sift through phone directories’ D section.

Moore had no idea that Denke was doing the same thing and was searching for him too.

Despite never sharing his stories about his time in the Army, Moore said his kids often asked him if he had friends. He said he made many friends, but there was one, in particular, he said that he considered a brother.

“They asked, ‘What’s his name?’ I said, ‘Gary Denke,’” Moore said his reply was to his children.

Denke was the one who found Moore.

“He was the one that hunted me down,” Moore said of Denke.

Their first conversation over the phone almost never happened.

“And the first time we talked, my daughter, she almost hung up. I heard it. I asked her, ‘Sweetheart, who is it?’ It’s the house phone. She goes, ‘I don’t know, dad.’ Then I heard ‘Gary Denke.’ And I said, ‘Woah, woah, give it to me,’” Moore said as he and Denke laughed. “That’s how we got started.” 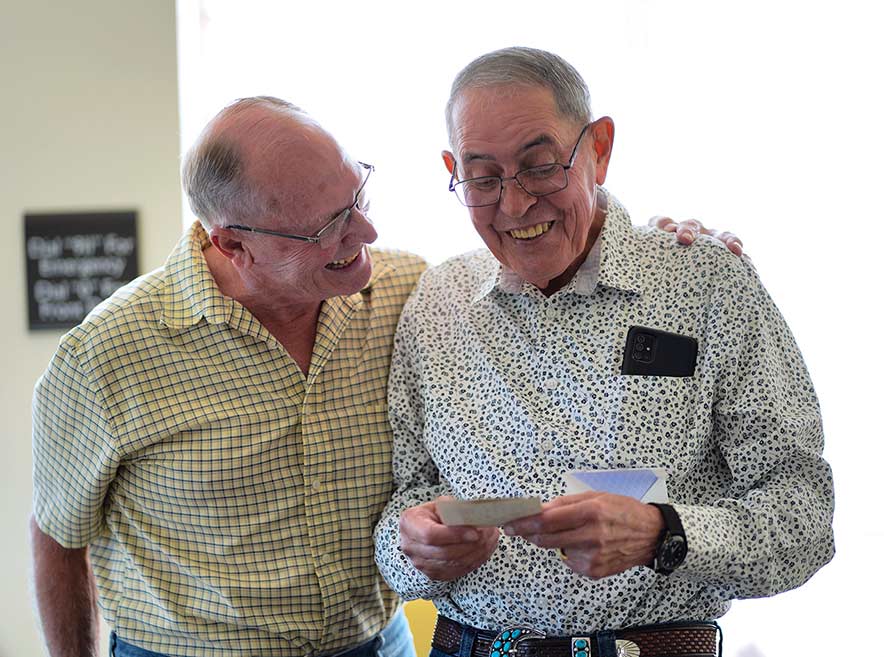 Navajo Times | Donovan Quintero
Vietnam veterans Tommy Moore, right, and Gary Denke, laugh at a photo of them that was taken while serving in the Vietnam War during their reunion on Oct. 13 in Gallup.

The two reunited at the Hilton Garden Inn. The hotel paid for Denke and his wife Suzan Denke’s stay. Moore said he is reuniting with his brother after not seeing him since 1970 began making him anxious.

“It’s been a long time coming to me. I’m just sitting there and getting all nervous and everything,” Moore recollected.

Denke quickly reassured him and said he was the guy he had met five decades before.

“I’m just the same old ordinary guy that I always was,” Denke said.

For Denke, his memory of Moore was not about what they did in the war but about how he dressed.

“When we were in our civilian clothes, the way I remember it, Tommy normally wore a cowboy hat, and he dressed western,” Denke said.

Being a guitarist himself, Denke said he also found out Moore played.

“Somehow, I found out that he played the guitar and sang. And that we were doing the same thing at the same time in the military. And so that’s how I remember him,” Denke said.

“I got attached to him (Gary), and I think the spirit of brotherhood begun is in Vietnam, of all places,” Moore said.

Like most wartime veterans, Moore said he’s had his share of post-traumatic stress disorder and battling those demons from time to time. Because of his experiences, he kept to himself.

But to see his buddy again.

“In the back of my mind, I think this is very important. I look at my life; I’ve been through so much. Sometimes PTSD will get to me a little bit. But there’s always a missing piece of the puzzle,” Moore said.

The pair sat at a table in the hotel. Both brought boxes of photos, and Moore brought his uniform, which Denke helped Moore’s wife, Laverne Moore, understand what each patch meant and signified.

One photo, in particular, a black-and-white photo of Moore, was special to Denke because of a message Moore wrote on the back of it.

At the bottom of the message and barely visible, it read, “Shi – boy.”

When Moore’s wife read it, she became emotional because she realized what her husband had been talking about when he spoke of Denke.

For Moore, reuniting with Denke was the puzzle he’d been missing for many years.

“And I love him,” said Moore, who became emotional.

Moore turned to his wife and said she knew how tough it was to be married to a veteran.

“But she deals with it. She takes me places; she takes care of me,” Moore said of his wife.

Denke is home now, and Moore is too, but the two plan to stay in touch from now on. Moore doesn’t plan on rehashing their time in the war.

They want to focus on being happy now, said Moore.