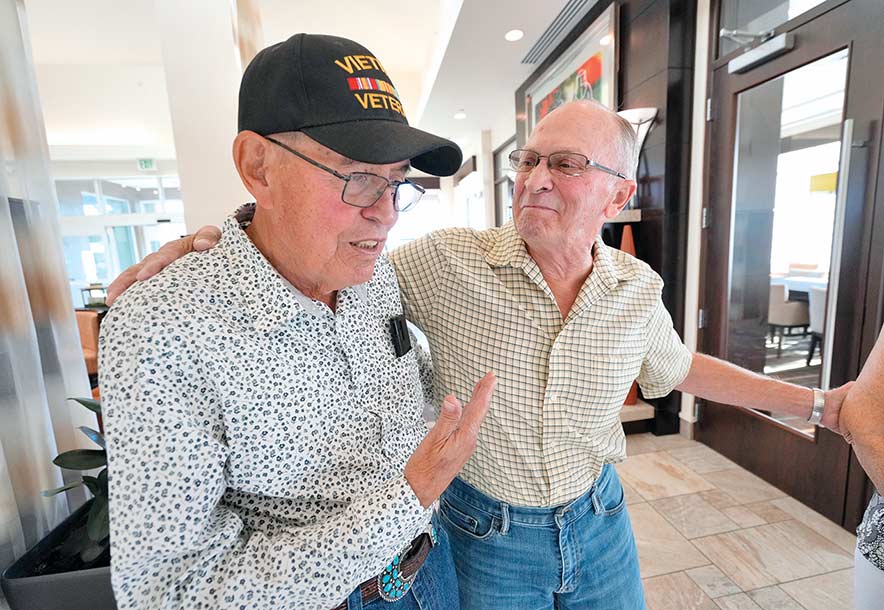 Navajo Times | Donovan Quintero
Vietnam veterans Tommy Moore, left, and Gary Denke speak about their friendship that began during the Vietnam War during their reunion Oct. 13 in Gallup.

Every Vietnam veteran has a missing puzzle, said Tommy Moore, who found his at the Hilton Garden Inn hotel in Gallup Oct. 13.

“He was the missing puzzle that I’ve been looking for,” said Moore, 74. “I’m proud to be a veteran, and I don’t care what people say about us. I’m proud to be who I am––alive, and I have my children.”

Moore said when his children were growing up, they would ask him if he had any true friends when he was younger.

“I said, ‘Yeah, I did. His name is Gary Denke,’” Moore said. “And they remember. When he called, and when they met him, they said, ‘You’re the guy that our dad talks about.’”

When Moore was discharged from the Army in 1971, he lost touch with Denke, 72, who recently looked him up online and found his contact.

Denke said he took a chance and called the number he found; sure enough, it was Moore’s number.

The old friends reunited, alongside their families, in October.

Denke traveled with his wife, Suzan Denke, from the Mount Rushmore state to meet again.

“It was emotional,” Denke told the Navajo Times. “It was really a good thing, and it’s something that I had looked forward to for quite some time. And I often thought about Tommy and our friendship.” 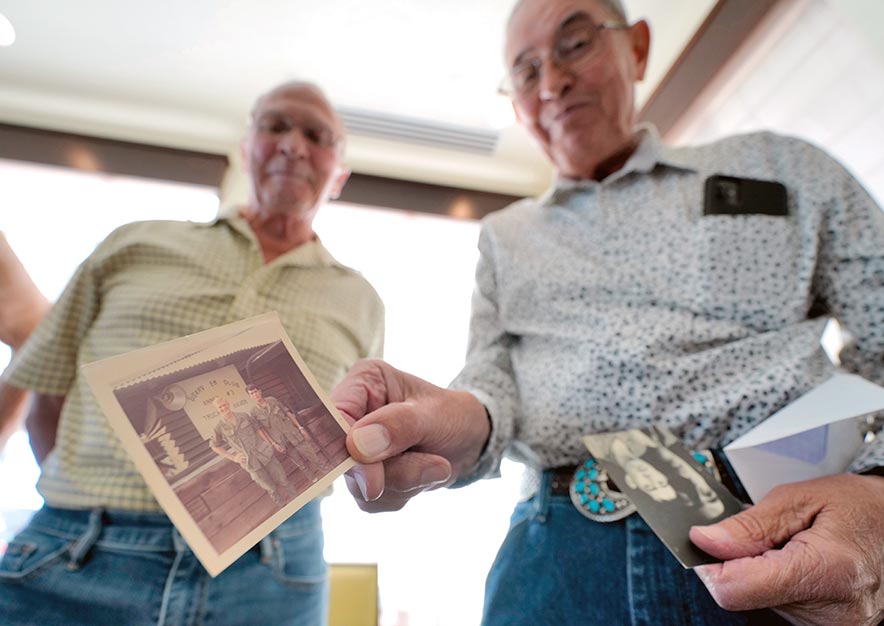 Navajo Times | Donovan Quintero
Vietnam veteran Tommy Moore, right, holds a photo of himself and his friend Gary Denke that was taken while serving in the Vietnam War.

“It was just a wonderful thing, to be honest,” Denke said. “We were in Advanced Individual Training in Fort Ord, California, (in 1969) and in Vietnam––it was very fulfilling for me to reunite with my friend after 52 years.”

Moore said they still ask each other how they actually met.

“Maybe we sat down and said, ‘Hey, pass me the salt.’ Maybe that’s how we met,” Moore said. “I have no clue, and he (Denke) doesn’t have a clue. But we became friends, and we got so close and we both got orders to go to Vietnam.

“We took different flights out there to Vietnam; they split us up,” he remembers. “We got to Vietnam.”

“On our day off somewhere, we found each other,” Moore said. “Every day off, I (went) to his company and inquired about him. He did the same thing, and that’s how we hung out together.”

Salt and Pepper, that’s what their comrades called them in Vietnam. Denke said he doesn’t know why those names were given to them; perhaps Moore is Diné and Denke is Bilagáana.

Denke said he didn’t always look for Moore over the years but made a complete effort until around August 2022.

“I simply took a chance on Tommy Moore from Gallup, New Mexico, online, and I thought, ‘Well, this matches the Tommy Moore that I knew,’” Denke explained. “I said, ‘That’s got to be the Tommy that I once knew, and I’m pretty sure of it.’ So, I called the number and their daughter, Prentiss, answered.

“As I spoke to Prentiss––apparently, Tommy overheard some of it, and he said he wanted to talk,” he said. “So, that’s how we made a connection. But I had not pursued my idea of reuniting with Tommy until then.”

Denke’s wife, Suzan, said they don’t use social media or the internet.

Denke said he spoke with Prentiss for a while, and he’s thankful the 18-year-old didn’t hang up. He said the conversation was long enough to where Moore overheard his name.

Denke said speaking to Moore after 52 years was like talking to him only a week ago. He noted that the element of time brought time close together.

“Hearing his voice, I knew immediately that that’s the Tommy Moore that I knew in Vietnam,” Denke said. “It just brought that time frame closer.”

Moore said when he was discharged from the military, he rodeoed and traveled across the country to compete and often stopped in Texas because he thought Denke lived in the Lone Star state.

“My brother, that’s what I called him,” Moore said. “Throughout the years––this is when technology started coming up with the internet, which made it easier, but I still couldn’t find him.

“He was doing the same thing to find out where I was,” he said. “Somewhere on his part––that place, western New Mexico, there’s a town; he scoped in and saw Gallup. What he did was find my landline, and he found me.”

Denke, Suzan, and Moore’s family spent time together and visited local attractions, such as the Navajo Nation Veterans Memorial Park, and stopped by the flea markets. Denke and his wife said they learned about the Diné culture and traditions, and experiencing the Navajo capital was fascinating.

“This is a friend of mine from a while back,” Moore said. “Fifty-two years is a long time, and we were both young. What can I say? The emotions were there, and he found me.”

He remembers sitting on the porch three months ago, hearing the phone ring, which Prentiss answered that day, and it was Denke.

“I said, ‘Give me the phone.’ We just broke down over the phone because it was so emotional,” Moore said. “After that, we kept calling each other biweekly, and we kept in touch with each other. Somewhere he made up his mind … to come see (me). That’s how we met up. It was a blessing in disguise.

“It was really an honor just to see my brother again,” Moore said. “This isn’t the end.”