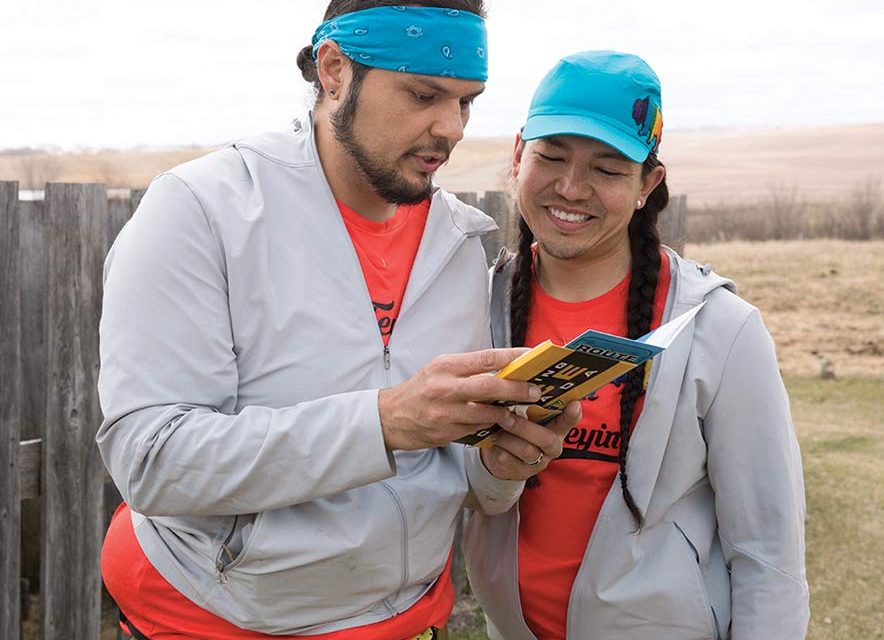 Anthony Johnson and James Makokis wanted to highlight the importance of women and bring attention to missing and murdered Indigenous women … so what better way than to win the race on the reality television show Amazing Race Canada? Johnson, who is originally from Kayenta, and his husband Makokis are the first two-spirit indigenous married couple to ever win Amazing Race Canada.

The race entails traveling across six provinces, one territory, 14 cities, and more than 20,000 kilometers. They won two all-new 2019 Chevrolet Blazers, a once-in-a-lifetime trip for two around the world, and a $250,000 cash prize — but what was also gained was a national spotlight for Johnson and James to bring awareness to women, MMIW, and both their Navajo and Saddle Lake Cree nations. “As an indigenous person and Navajo, and how I was raised, it’s important to represent our relations in a positive light, so we wanted to highlight the importance of women,” said Johnson during a phone interview. “They are the givers of life. They have so much power and influence.”

Throughout the competition Johnson and Makokis found themselves in the midst of different obstacles they overcame because they were familiar with them through their own life experience or they would reference aspects of their culture. Being indigenous gave them a clear advantage over the other eight teams they were competing against.

In one episode the teams had to mine potash in Saskatchewan. They had to hang plastic curtains in order to ensure proper ventilation. They also had to place potash onto the bottom of the curtain to seal it off. “We actually have to do this at the bottom of the teepees so that air won’t get into them,” said Johnson as he shoveled the potash on the plastic curtain. They finished this obstacle in first place.

Johnson had lived on Navajo until he was 13 then moved to Canada. He earned an economics degree from Harvard University. He moved back to Navajo to learn the culture and traditions, and that’s where he became aware of the Nádleeh, the Navajo term used for two-spirit people. “I started learning that in our culture, our own heritage there is a word ‘Nádleeh’ that we use to describe who I am,” said Johnson. “There is a power to this that our people and culture recognize that I didn’t feel growing up.”

Then he went on to meet Makokis, a physician who had a centerfold in “Out Magazine,” an LGBT fashion, entertainment and lifestyle magazine. When Johnson saw Makokis in the magazine he reached out and they started going out. During the taping of “Amazing Race Canada” the couple celebrated their two-year anniversary.

The men say women have always inspired them — mostly the women in their families, but also prominent leaders like Annie Dodge Wauneka, who worked to improve health care and education on Navajo. “To have a legacy of strong women in my Nation — my mom was a strong woman, my grandmother — it’s only natural to want to highlight the issues,” said Johnson.

To spotlight the issues in their brief stint in the limelight, Makokis and Johnson ran to the finish line in red ribbon skirts that Johnson had made. They also made “Water is life” shirts. “The teachings around water and teachings around women and the structure of our society, our technology, is important for the world to know exists,” said Johnson. “And it’s for us to uphold and to live by, because it helps humans to be a better people.” Like Navajo, Makokis said his Cree tribe is matrilineal.

He said the ribbon skirt has great symbolic meaning. It is the dress of their grandmother, and inside that grandmother is protection for the children and next generations. “Everything that is derived from the home is related to the woman,” said Makokis. “Women allow men to live in the house.” He said his grandfather, who is one of their tribe’s “knowledge holders,” said currently we are in the time of women. Women will be the leaders, and because of these teachings Johnson and Makokis had no problem promoting women while on “Amazing Race Canada.”

“Knowing those teachings,” said Makokis, “Anthony and I, as two-spirit people who interface with both genders, knew it was important for us to give women the space they need and step aside, and create any opportunity for them to reflect that.”