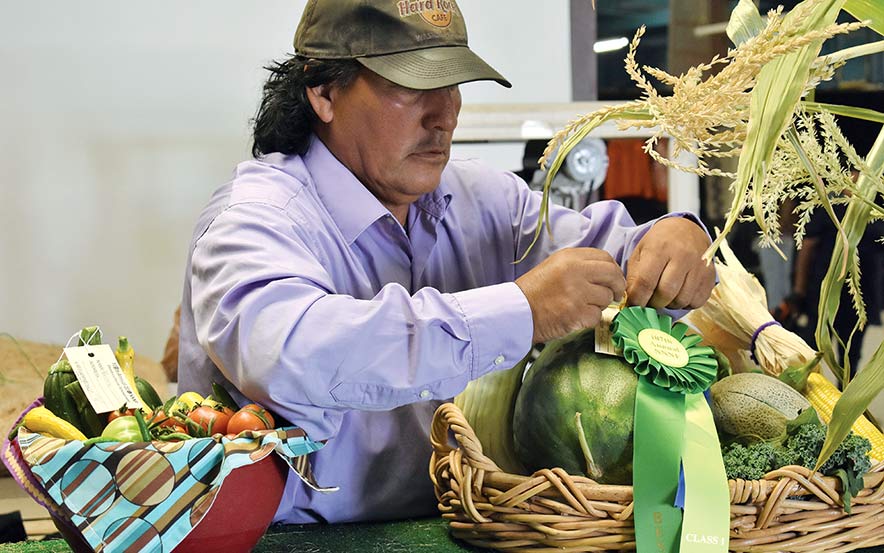 A handful of superheroes and dozens of volunteers are leading the charge to turn the Northern Navajo Nation Fair around from years of alleged mismanagement and improprieties.

With one week until fair time, a call for “all hands on deck” is being accompanied by a last push to bring in sponsors and volunteers to the fair and you, too, can contribute, says Redawn George, who was appointed 2019 fair director earlier this month.

“We’re still accepting donations,” said George. “We sent out numerous donation request letters and we got very few responses. Because of the people before us, this is what we’re enduring. We say this is ‘our fair.’ Now it’s time for everyone to come together and help.” George, along with Northern Navajo Fair Board President Jonnye Kaibah Begay and Vice President Harry Descheene, has had her work cut out for her with not a minute to spare.

The board, the fair director and event coordinators are all volunteering their services with no pay.

As of last Saturday the only major sponsors were Northern Edge Casino ($25,000), Navajo Transitional Energy Company ($20,000), and Tacitus, a helium extraction company ($13,000), although there have been additional in-kind donations.

“Since we had all 20 chapters were there, some of the officials figured it would be a good opportunity to get their support,” she said. As of this past Monday, a few more large donations started trickling in, said George — one from the Navajo Nation president’s office ($30,000), and another from the Navajo Division of Natural Resources ($50,000) that will likely come from the Agriculture Infrastructure Fund to be earmarked toward outreach events and improvements that involve agriculture such as 4H, horticulture and rodeo.

The speaker’s office said it would help too, said George, and they are awaiting answers from the Division of Economic Development and a few other departments.

George said, as another convenient option, individuals, organizations and businesses can also contribute to the fair by going to any Wells Fargo Bank and making a direct donation to the “Northern Navajo Fair” account. One of the toughest parts of the fair is that all of the resources need to be raised through sponsorships and donations, which is an incredible amount of work. Added to that, a lot of vendors and business have become disenchanted with the state of the oldest and most traditional fair on the Nation. Unlike the Navajo Nation Fair in Window Rock, which has money built into the government budget, other fairs are on their own, which some folks say is not right to begin with.

“The Northern Agency puts more money into the Navajo Nation treasury than any other agency,” said Descheene, who added that all 20 northern chapters had voted unanimously in favor of the Nez-Lizer administration. In past years, lack of accountability and transparency has plagued the fair and has almost taken it under more than once.

It has also created mistrust and exasperation among community members who really want to love their fair.

Last October there was an uprising at Shiprock Chapter to oust former fair board chairman Dan Smith who was accused of causing discord with everyone from the board to vendors to fairgoers, which he denied. George, who sponsored the resolution to remove Smith, said that he did not follow policies and there were no controls or reports detailing revenues and expenditures. She’s determined to change that now.

“The reason why I took on this responsibility is because being a community member and living here my whole life I got tired of seeing the fairgrounds the way it was,” said George. “I got tired of hearing the same story of ‘Where’s the money? How much money was made? What do you guys do with the money?’ “I was given the opportunity to become the fair director,” she said, “now my intention is to be 100 percent transparent.”

Amidst the fallout from last year, this year’s fair started off in the red with approximately $100,000 of debt left by Smith, who closed the bank accounts when he was removed from his position, saying there was no money left. “We’re trying to reestablish the trust and the confidence of the community,” said George. At this point, everyone involved just seems to want to move forward with a fresh start. Entry fees dropped (sub) In some good news for fairgoers, admission and entry fees have dropped dramatically, including for the parade and vendors, which George said has brought increased participation.

All high school bands and veterans groups will also have their parade fees waved. The popular Indian Market is being brought back to its regular location south of the fairgrounds, and the powwow is coming back too, along with standard events such as song and dance, rodeo, 4H, horticulture, the Yei’ Bi’ Chei’ and the Miss Northern Navajo Nation pageant that will be held at the Phil Thomas Performing Arts Center starting Tuesday.

The Aging and Long-Term Care Department will help with Senior Appreciation Day and the Office of Diné Youth with the Kids’ Day portion. There are still, however, several opportunities to sponsor specific events, said George. Outstanding needs include a sponsor for song and dance, the silver crown for Miss Northern Navajo Nation, portable toilets, waste management services, and all kinds of hardware and labor needed to address outstanding safety concerns on the fairgrounds, as well as basic facilities maintenance.

Everything from lumber to screws, construction laborers to welders are desperately needed and George is asking for volunteers who have an inclination to support the fair to donate their time and services. The same applies to performers and entertainers, she said. There will not be any “big-name” acts this year, but there will be plenty of local talent. “Anyone who is willing to donate their time to the community is more than welcome to come sign up to perform,” she said.

Descheene said that Frederick White of Building Nations will be managing the financials for this year’s fair, which, he said, has already improved vendor confidence. He believes once the accountability is under control, the fair will once again grow “bigger and better.”

This year, the fair office is only accepting money orders or cashier’s checks to further improve accountability, says George. “There’s no cash on the premises,” said George. “We want to make sure that every dollar is accounted for.” She said the final closeout report for this year’s fair will be available in December with the revenue reports.

“I’d like to see how much this fair makes without anybody touching the money,” she said. Begay agrees. “We’re wanting to be honest about how much money is coming in and how we’re expending the funds to make this fair happen,” said Begay. “We started out with zero and there are a lot of outstanding bills — it’s been very challenging.”

However, Begay said she’s really grateful to everyone who is stepping up to the plate to help rebuild the fair, especially the younger generation, which has been very enthusiastic. “The fair’s going to happen regardless of whether or not we have enough money,” said George. “It’s very frustrating, but we’re doing it for our community and all of the people that come to see the oldest fair on the Navajo Reservation.”

With any luck, and a whole lot of help, this year’s fair will turn a new leaf. “It’s tradition, it’s culture,” said Descheene. “We’re having to do what we have to do. It’s going to happen.” Information: 505-368-4910 or visit 108th Northern Navajo Nation Fair on Facebook.