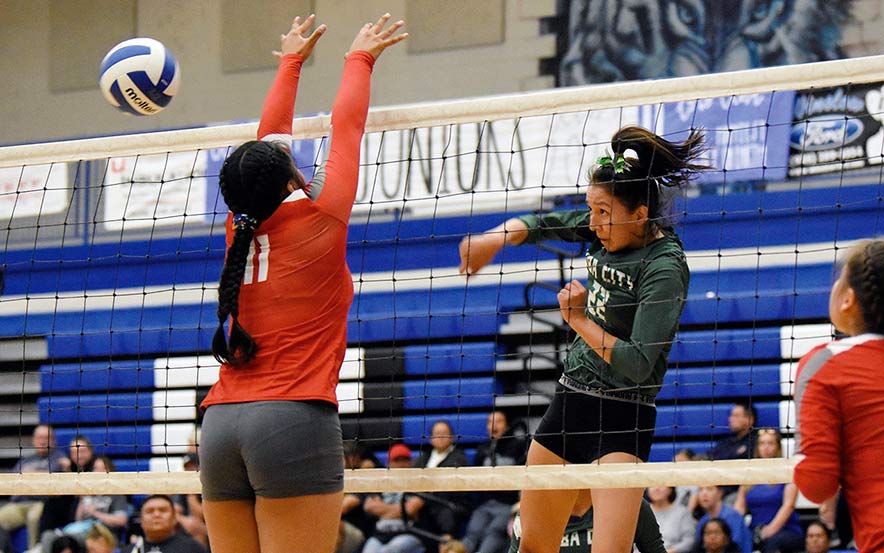 The Lady Warriors already knew that but their championship run clarified how dynamic this team really is.

“This shows that we’re real competitive,” Lady Warrior coach Harlan Barlow said. “It feels good that are hard work is paying off and knowing that we can come in and beat some competitive teams. This is a learning experience and this is what these tournaments are for.”

Surprisingly, this was the first time Tuba City has won this tournament. They’ve finished near the top in previous years, including last season’s third-place finish.

“It feels really good to win this title because I’m a senior,” Tuba City setter Gracie Henderson said. “I just kept asking myself that this is my last Snowflake tournament and how do I want to end it.”

The Warriors won their pool against the likes of Round Valley, Mogollon and Blue Ridge to earn one of the top seeds in the gold bracket.

In the opening round, Tuba City beat Pima in straight sets, which earned them the right to face archrival Monument Valley in the next round.

Both teams played at a high level with some rallies going the distance as Tuba City outlasted the Mustangs 21-25, 25-15, 15-9 to advance into the winner’s side of the double-elimination bracket.

The Warriors then faced Gilbert Mesquite and won in straight sets as they awaited the winner to come out of the consolation bracket. Mesquite happened to be that team and Tuba City wasted no time winning the opening set by a 25-10 margin.

“We just stayed connected,” freshman Melia Barlow said. “That’s the best way to play because we were talking and encouraging each other on the court. The bench did their part by cheering and motivating us.

“I think we were just very consistent in what we were doing,” she added.

In a much closer set, Mesquite made things a bit interesting by pulling within 21-20 thanks to a 5-1 run. Nonetheless, Tuba capped the tournament with a resounding 4-0 rally behind a pair of kills from sophomore middle hitter Trista Bennett for the tournament win.

“We let them capitalize on some of our mistakes,” Tuba City senior Jayda Chee said of Mesquite’s rally. “Once we make mistakes we have to stop it because it opens a window.”

Even though Mesquite did draw within a point, Chee said this year’s squad is more equipped to handle those situations.

“I think the biggest difference from previous years is we have a strong bench,” she said. “Whenever someone is having an off day as far as putting the ball down or picking up balls we can sub in someone from the bench to get the job done.”

Chee said winning the tournament makes up for the fourth-place finish they had during the Coconino Invitational earlier this month.

“I think losing early in that tournament humbled us,” she said. “It showed that we’re not the best team yet but if we work hard enough we can be the best team.”

Henderson said playing in the two competitive tournaments has made them better.

“We do play a lot of club but the atmosphere here was different,” she said. “The teams we played challenged us and we had to match their skills to win it.”

After dropping a tight match with Tuba, MV was eliminated by the tournament host in the consolation bracket.

In the silver bracket, Window Rock reached the tournament finals, losing to Mogollon.