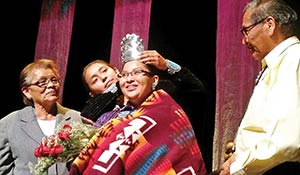 It’s the beginning of an era because the newly crowned Miss Northern Navajo, Robyn Barber, is the first royalty to wear the new crown.

Out of the three contestants vying for the new crown Barber won over the judges at the end of the week.

“It is shocking,” Barber said of her crowning, noting that she is still trying to adjust to it.