“I’m a kid at heart, so any time I get to time-travel, that’s fine with me,” he said. Still, it’s kind of a relief to finally have a role where “I don’t have to get into war paint or feathers.” Mesa, 31, Diné/Soboba Band of Luiseño Indians, portrays one of the newest interns on “Grey’s Anatomy.” His character, James Chee, is “just a normal person who happens to be Native,” Mesa explained, adding that he’s under a non-disclosure agreement and can’t get into any more detail than that without spoiling a few of the medical drama’s famous plot twists. 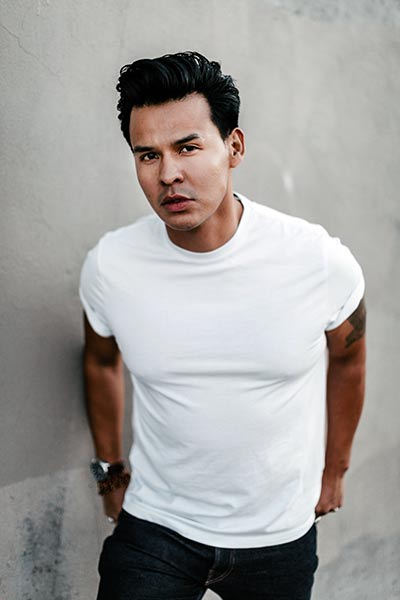 Aside from the fact that the show is one of the longest running and most popular on TV, the Santa Fe-based actor/writer/artist/photographer says he’s “just really excited to be working again.” “I was doing a lot of live theater,” he explained. “Then COVID came along, and everything just dried up.” The episode where Chee is introduced, “My Happy Ending,” aired Nov. 19, and involves tracking COVID patients.

“It’s weird because it’s about what we’re going through at this moment,” Mesa said. “We’re dealing with COVID on the show, and then, as actors, we’re getting tested three times a week. It’s like being in a ‘Black Mirror’ episode or something.”

While there’s “a magic that happens on every set,” being part of such a beloved and influential TV show is definitely has its perks. “It’s been on for 17 seasons, so there’s a lot of people who grew up with ‘Grey’s Anatomy,’” he said.

“I’m getting a lot more feedback than I have for other projects.” Some of his favorite is from real-life Native medical students. “They say, ‘I’ve been watching the show for years and kept wishing they’d come up with a Native character,’” Mesa said. “It’s so great that they can now see themselves on television.”

Even more so, Mesa hopes James Chee can inspire some Navajo kids who may not know any real-life Diné doctors to grow up to be physicians. “When you see someone who looks like you in this role, it gives you hope,” he said. “You think, ‘I could do that.’”

At any rate, he hopes the show will provide a little escapism from “what has been a very dark year for a lot of us.” “If I can bring a bit of happiness into someone’s day, I feel very fortunate,” he said. “All I can say is, there’s more to come, and it’s all slowly going to get better.”

Information: The “Grey’s Anatomy” episode “My Happy Ending,” which aired Nov. 19, can be accessed on Hulu.