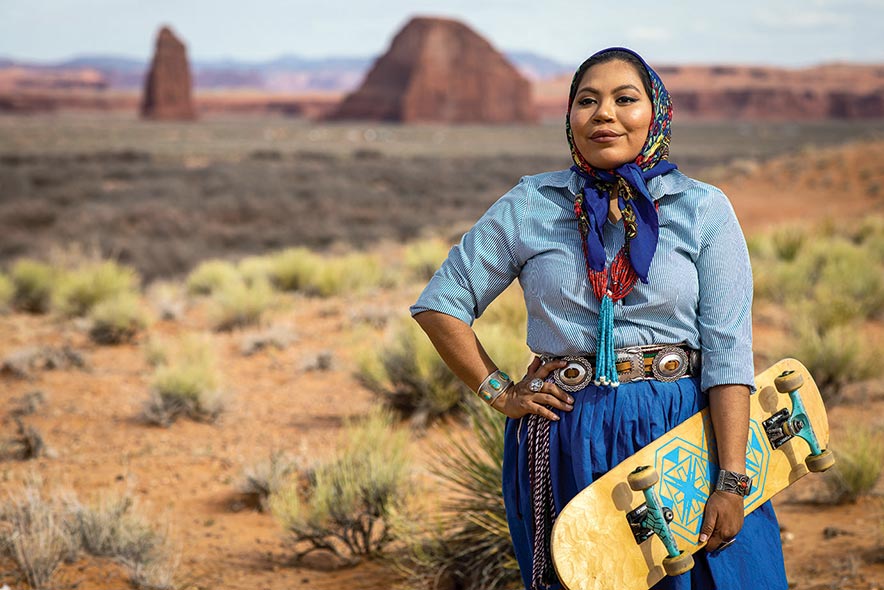 Navajo Times | Sharon Chischilly
Naiomi Glasses, Diné skateboarder, of Rock Point, Ariz., became a viral star on TikTok after posting a video of her skating down a red sandstone slope.

When weaver Naiomi Glasses joined the “Dogg Face” (Nathan Apodaca) TikTok challenge and skateboarded across the red rock landscape to Fleetwood Mac’s “Dreams,” she had no idea she would go viral.

Showcasing her turquoise Diné dress and jewelry, tsiiyéél, moccasins and her beautiful homelands as she glided into the sunset, Glasses garnered accolades and attention at a level she did not expect.

Through the video, shot by her brother Tyler, that has now received over 1.8 million views, Glasses’ lifelong passions for skateboarding and Diné culture have unexpectedly launched a new fashion and beauty career for the 24-year-old social media sensation.

“I feel like I’m just such a normal person,” said Glasses. “I’m just being myself over here and people enjoy it and I’m very thankful.”

Glasses, who started skateboarding when she was five in a suburb of Phoenix, said it gave her a sense of freedom and liberation from bullying she received at school for looking different because of her bilateral cleft palate and lip.

“I used skateboarding to get away from it and have fun and focus on something completely different,” she said. “It was just a good place for me.”

When her family moved back to their ranch in Rock Point when she was 12, Glasses continued skateboarding through high school in Kayenta. But the lack of paved areas and skateboard access on Navajo has always been a challenge.

The idea to skate down a smooth sandstone crossing for the TikTok challenge came about out of necessity, she said.

With only about five skate parks on the whole Navajo Nation, all of which have been closed due to the pandemic, Glasses said she thought she’d give the rocky red terrain a try.
“That’s how that TikTok was born,” smiled Glasses. 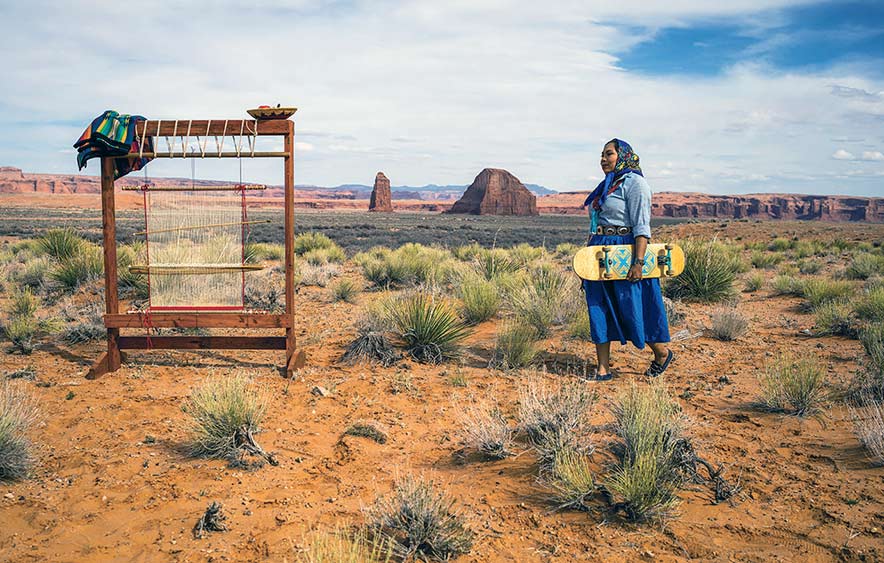 As part of a ranching family, Glasses tends to a flock of sheep, goats, horses, cattle and dogs daily.

These days, in between feeding the animals, she starts her mornings with media calls and interviews before weaving for the rest of the day.

Living in a remote, rural area, Glasses said it’s hard to reconcile all of the public attention she’s receiving, especially during the isolation of the COVID-19 pandemic.

“It’s crazy how small the world feels with the internet,” she said. “When I’m out at the grocery store and someone says, ‘Hey, you’re Naiomi!’ it’s just completely, totally unreal to me.”

Like Dogg Face, who became an instant hit with his skateboarding-while-drinking-cranberry-juice TikTok and attracted lucrative endorsements, including from Ocean Spray, Glasses, who had already garnered recognition for her weaving, has now become instafamous worldwide.

This has led to dozens of media features for Glasses since last October, including Teen Vogue, Sephora and HuffPost as well as modeling, and cameo and brand ambassador engagements for apparel and make-up lines such as American Eagle, Trixie Cosmetics, Prados Beauty, Lauren Goodday, Winston Paul, Inspired by Diné Bizaad, Blended Girl Cosmetics and Cheekbone Beauty.

Dealing with the impacts of having a cleft lip and palate all of her life has made her more sensitive and compassionate towards other people, she said.

Glasses’ light-heartedness, humility and grace are proof she has risen above the challenges.

While wearing make-up used to be all about covering up her scars, Glasses says now she is having fun with it and it shows.

In a Facebook advertisement for Trixie Cosmetics, Glasses dons bright pink lipstick and eye shadow to complement her velveteen blouse, flower print scarf and turquoise bling, saying she is “living out her Diné doll dreams” and “sheep camp glam.”

Cameo, an app that puts fans in touch with stars they admire, also reached out to Glasses and asked if she would join their talent roster.

“It’s where celebrities do little shoutouts for people,” said Glasses. “That was so wild because I thought, ‘Oh my gosh, I’m not a celebrity!’”

Nevertheless, Glasses, who calls herself a modern day Navajo woman, has seamlessly stepped into the role of a public figure and Diné lifestyle ambassador.

“I kind of feel like I’ve been pushed into that without even realizing,” she said. “It’s slowly building me up for something bigger that I don’t quite understand right now.”

‘They lift me up’

Coming from a close-knit family, Glasses says she was always told she could accomplish anything she wanted to in life.

“My family was always there to reassure me that I could do anything and that I’m beautiful,” she said. “That’s what any child needs – honesty.”

Glasses boasts that her “Momager,” Cynthia Glasses, a writer and model in her own right, and her father, Tyler Glasses Sr., are her biggest fans. She and her siblings, Tyler and Heather, are very close.

“We’re all really supportive of each other,” she said. “They’re always there to lift me up.”

Glasses was also chosen to raise awareness about a new “Diné Skate Garden” project in Two Grey Hills where there are no outdoor recreation facilities.

The project, set to begin construction this fall, is a collaboration between Wonders Around the World, Inspiring Children Foundation, and Orenda Tribe and has drawn support from celebrities like musician Jewel and professional skateboarder Tony Hawk.

Glasses supports the idea of building skateparks on Navajo to help kids grow and build confidence.

“Not every kid is not going to take to football or basketball or team sports,” she said. “Some kids aren’t as outgoing, but once you see them at a skate park they turn into a whole different person.”

In a shoutout on social media, Hawk shared Glasses’ TikTok video with the message, “Here’s @naiomiglasses with her unique tribute of @doggface208… Text GOSKATE to 707070 to learn more about (and support) their #Dinéskategardenproject.”

Glasses says working with the international group to promote and raise funds for the Two Grey Hills project has given her insight into how to launch these types of initiatives.

Some day she would like to see more skate parks built across Navajo including in her community of Rock Point.

While Glasses is grateful for the attention she has received for skateboarding, she says she is first and foremost a weaver.

Last August, Glasses was featured in Vogue as one of the “8 Artists to Know” from Santa Fe Indian Market.

She learned the art of traditional Navajo weaving as a teenager from her well-known grandmother, the late Nellie Glasses, who taught her the fundamentals, including shearing, dying and spinning wool.

The first thing she wove, at 18, was a saddle blanket. She has since branched out to wearables like handbags, for which she has won awards.

Glasses is known for her use of bright, high contrast colors and symbols in her blankets and rare, classic “wedge weave” zig-zag patterns.

She says her unique and bold designs reflect her youthful mindset and a contemporary approach to traditional styles of weaving.

The long horizon and big sky of the Diné landscape and the elements in nature also influence her work.

“I love the sunrises and the sunsets here and I love the starry nights,” she said.

In her meteoric rise to fashion and beauty icon, she has also had the opportunity to lift up other Diné designers along with her, leveraging exposure for other artists as well as herself, because that’s just who she is.

Glasses likes to support Diné couture designers like Cynthia Trujillo, Winston Paul, Jennifer James Designs, and Mae Mallahan, for whom she has modeled, as well as skateboard artists like Di’orr Greenwood.

She is also inspired by her own brother Tyler’s weaving and sewing.

“His work is incredible,” she said. “He’s always thinking of cool, innovative designs.”

Glasses is working on several collaborative design projects and products but because she has signed non-disclosure agreements she can’t say any more than that. So stay tuned.

Becoming a Diné fashion and beauty ambassador, especially during the pandemic, is not something she could have predicted, but Glasses says she’s going with the flow.

“It feels like I’m swimming through honey,” chuckled Glasses. “It’s happening, but naturally, slowly and beautifully. I’m incredibly thankful for it.”