Scorps go 6-1 with win over PV 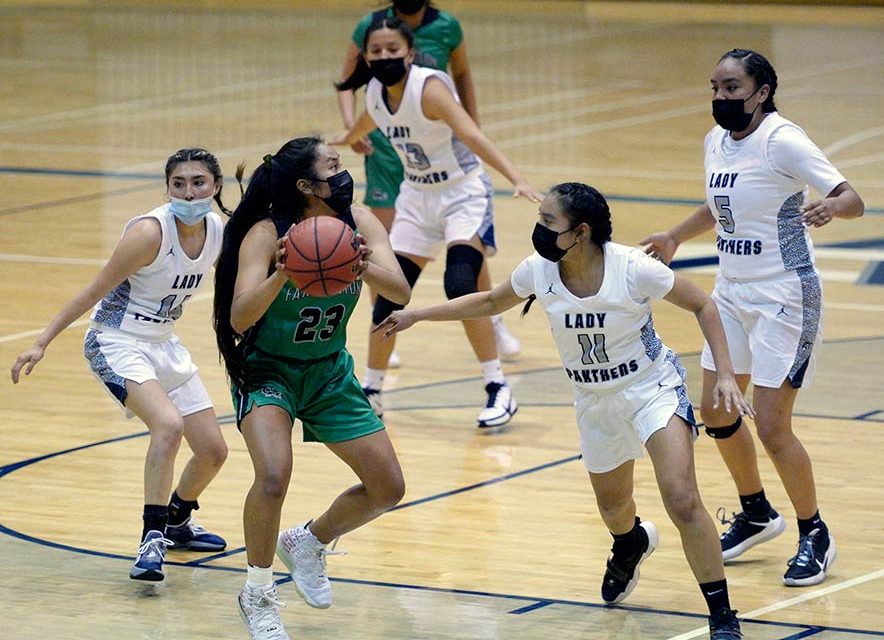 Being resilient paid dividends for both the Farmington and Piedra Vista girls’ basketball teams.

More so for the Lady Scorpions as Farmington pulled out a 57-43 win on Monday night after only leading by four points at the start of the fourth quarter.

The two teams played at PV without any fans as San Juan County dropped to yellow level in last week’s statewide metrics.

“They slow the tempo down and they had a good strategy going and it was something new for us to see,” Farmington coach Larenson Henderson said of PV’s refusal to get into an up-and-down game with his club.

“We just had to adjust to it,” Henderson said. “It took a long time for us to adjust but we kept the pressure up and we wore them down a little bit. They made some errors and then we started pushing the ball and we got some open shots.”

In its best outing from long range, the Scorps got eight good looks in the fourth and they nailed three of those shots to end any hope of PV controlling the tempo.

PV coach Joe Reed said Farmington’s fast-paced style and his team’s lack of experience were a difficult challenge as the Panthers were short two players.

“The game plan was spread them out because we don’t have enough bodies right now,” Reed said. “As beat-up as we are we didn’t want to get up and down with them but if we were healthy it would be a different story.”

“We tried to the best to our ability to spread them out,” Reed said. “It worked perfect but we had a couple selfish shots that went up and then it was only a matter of time before (Farmington) got hot from the three.”

Nonetheless, Reed said he was happy that his team was able to hang tough despite being outmanned.

“I’m proud of our effort,” he said. “We definitely got some things to work on but the girls gave me everything they had tonight.”

In that decisive fourth quarter, Farmington hit four of its first five shots for a 45-34 cushion, which included a trey each from sophomore guard Kamalani Anitielu and junior guard Audrey Henderson.

After a basket and a free throw by PV, Henderson added another trifecta and her steal padded the Scorpion’s lead to 55-39.

Early in the contest, Farmington was hurt by fouls as they were whistled for 13 infractions in that opening quarter. Those fouls put PV at the line 16 times but the Panthers only made four.

“In the first half we weren’t very good but in the second half we were a little better,” Reed said as PV went 11-of-28 at the charity line. “You make a 10 of those and if you look at the score it’s nail bite time at the end.”

Nonetheless, Reed said they gave Farmington a good game as junior guard Adreanna Eaton kept them in the contest with 24 points.

“I have a bunch of young girls with not a lot of varsity experience but they gained a ton tonight,” the PV coach said as his team fell to 3-4 overall. “Sometimes I feel when you lose, you win. It was a big step for our players to know that we’re without one of the state’s best players but we can still go out and compete and give people a run for their money.”

Kamalani Anitielu led Farmington as she finished with 19 while older sister Kiiyani added 17 and Henderson chipped in 11.

With the win, the Scorps improved to 6-1 in this abbreviated winter sports season, which includes a 3-1 record in District 2-5A play. Farmington’s only blemish was a 58-46 defeat to district rival Eldorado on April 6, and according to Henderson his team will not get a chance to avenge that loss since the Albuquerque school had to go into remote learning due to positive COVID-19 tests.

As a result, Eldorado had to suspend all athletics for two weeks and they won’t be in action until April 28, which is four days after their scheduled game with Farmington. Per the New Mexico Activities Association, that game will count as a no-contest.

Nonetheless, Henderson said the goal is to win the district race as they are in a two-way tie for first with Eldorado.

“We start again on Saturday at Sandia and we’ll go from there,” he said.

Earlier this year, Farmington defeated Sandia at home 63-59 in overtime.

“It’s going to be tough to be going to their place,” he said. “I tell you what, I think my girls really thrive on the fans. And today it was just really bothersome with no fans.”

Henderson is hoping the county can get to either the green or turquoise level so they can have fans present at their home games.

“We have a couple of weeks to change that, and hopefully our community can come through with that,” he said.