There’s a reason autobiographies, particularly of non-celebrities, are toward the bottom of most lists of people’s favorite book genres. Some people have interesting lives and can’t write; other people have good story-telling skills, but their lives are less interesting than they think. 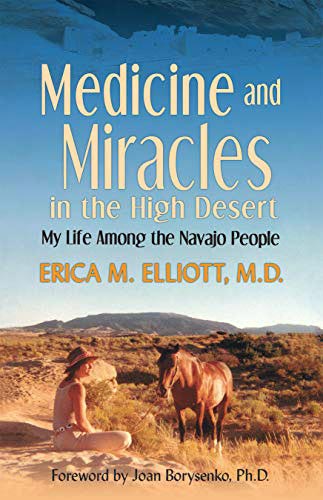 Courtesy photo
“Medicine and Miracles in the High Desert: My Life among the Navajo People” is Erica Elliott’s memoir of her time among the Diné, first as a teacher in Chinle and then as a physician in Cuba, New Mexico.

But Dr. Erica Elliott’s recent memoir of her life as a white woman on the Navajo Reservation in the early 1970s reads like a good novel. She knows how to tell a story, and has plenty to tell. I read her 197-page book, “Medicine and Miracles in the High Desert: My Life among the Navajo People,” almost in one sitting, and was sad when it was over (although she says in the afterward she’s working on three sequels).

Whether it would be as interesting to Navajos (like Elliott, I’m a bilagáana) is hard to tell, but I think particularly young Diné might be interested to know what the Navajo Nation was like 50 years ago.

As a current Chinle resident who arrived in 2005, I can say things have changed a lot. Elliott, who started out as an elementary school teacher before getting her M.D., was confronted by students who wouldn’t look at her (out of respect), barely spoke English and spit tobacco juice on the floor, as they were used to in their dirt-floor hogans.

Hogans far outnumbered trailers at that time, and there were ceremonies — either traditional Navajo or Native American Church — nearly every weekend. Now-busy U.S. 191 was a sleepy two-lane road, and it was about the only paved road in the area. The Tséyi’ Shopping Center was not yet built, and trading posts were still the major source of goods for many people. The teachers hung out at Fleming Begaye’s little café; fast food was still in the future. Everyone had sheep, and knew how to herd and butcher. And anyone could hike into Canyon de Chelly with or without a guide.

I found myself wishing I could have seen Chinle then, when it was still so … Navajo.

Unlike the other teachers at Chinle Boarding School, most of whom were close to retirement and took every opportunity to leave the rez, the 20-somethng Elliott plunged into the culture. She visited every student at his or her home, winning over their parents by helping with the household tasks. She learned the language, and accepted every invitation to a ceremony (to this day, she credits an NAC ceremony with curing an unexplained hard lump in her neck).

She was a pioneer in bilingual, bicultural education, trying to meet her students where they were at and learn from them as they learned from her. One summer vacation was spent with her boyfriend’s parents, herding sheep in Red Valley and learning the intricacies of Diné Kehji (sometimes the hard way). She learned to card, spin, weave and butcher.

It wasn’t all cross-cultural bliss; she narrowly escaped being raped and murdered in an unnamed border town, and while camping in southern Utah, came face-to-face, quite literally, with a mountain lion.

While she only lived on the reservation two years, Elliott sure packed a lot in.

The experience was a turning point for her as she spent the next years traveling the world and trying to find her calling. During a stint in the Peace Corps in Ecuador, she discovered a gift for healing, and went back to school, first for a master’s in education and then … “Against all odds — no money, considered too old at 29, wrong gender and wrong background with my liberal arts degree — I applied to the University of Colorado School of Medicine.”

After receiving her M.D., she returned to the Four Corners, taking a job in what was then a tiny, flood-prone, severely understaffed clinic in Cuba, New Mexico. This led to more adventures, but they were more in the realm of sleep deprivation and tense moments doing procedures she had never done before, a medical textbook open near the operating table, with coaching over the telephone by a more experienced physician in Gallup.

By the end of the book, the prayers said for her at an NAC ceremony are uncannily fulfilled.

Although she is trained in Western medicine, Elliott never forgot the healing she had seen and experienced herself through ceremonies, herbs and prayer. Along with the intuition that has always guided her life, they remain a part of her as she practices in the co-housing community she founded in Santa Fe.

The lesson from this extraordinary life is obvious: The treasures gained by living with an open heart and open mind are worth the risks.

To repay the children of Chinle (or by now, their grandchildren) for the life experience she gained from them, Elliott recently donated 1,400 copies of her book to the Chinle Unified School District. If you’re unable to borrow one, you can buy “Medicine and Miracles in the High Desert” (Balboa Press, 2020) on amazon.com for $3.99 on Kindle, $24.35 for hardcover or $12.39 for paperback.