One of the last official duties Sgt. Lamar Martin performed was at a Sept. 17 promotion ceremony in Window Rock. 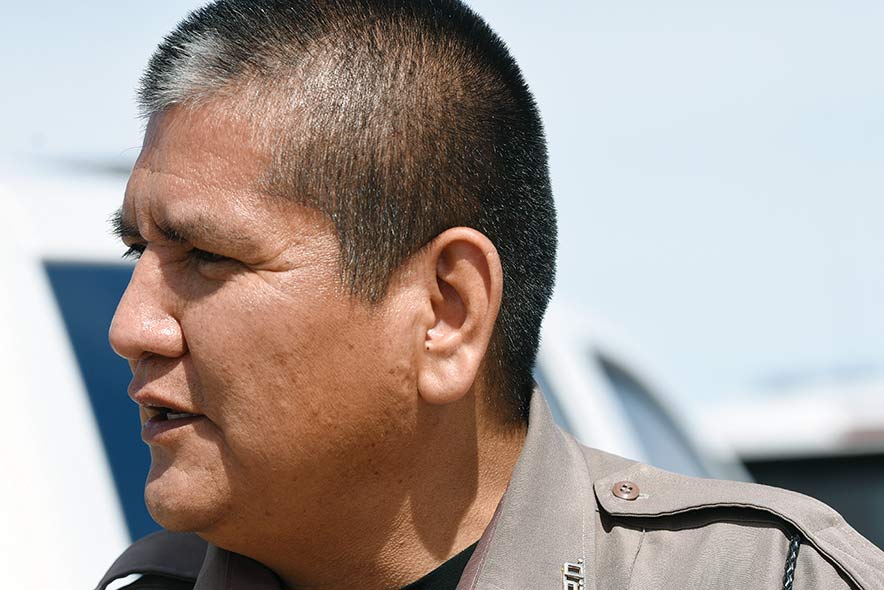 Martin, a Marine Corps veteran and New Mexico Army National Guard soldier, and several of his fellow officers conducted a “posting of colors” ceremony at Capt. Michael Henderson’s promotion, which was held at the Navajo Nation Museum.

The 22-year law enforcement officer carried the Arizona state flag. He kept the officers in step as he quietly, but firmly, called cadence.

Henderson’s promotion ceremony began and ended without a hitch as Martin stood by quietly watching a fellow veteran’s and soldier’s promotion.

Martin died on Monday morning. Fellow officers expressed their condolences and appreciation for his contributions as a Navajo Police officer.

“He was a big asset. I don’t think our command staff will truly know how much an impact he made on the officers,” said one officer. “He’s going to be missed. I’m going to miss him.”

“Today, Arizona mourns the loss of Sergeant Lamar Martin,” Ducey said. “In addition to dedicating more than 20 years of service to the Navajo Police Department, Sergeant Martin was a military veteran who served in the U.S. Marine Corps and New Mexico Army National Guard.”

Martin participated in Operation Iraqi Freedom in 2004 and 2009. As a police officer, he was a defensive tactics instructor, a general instructor and trained new police officers in the field. He was also a member of the department’s elite unit known as the Strategic Reaction Team.

Martin became a Navajo Police officer on Nov. 4, 1997.  He served and dedicated 22 years of service to the Navajo Nation through this department.

The four-day training exercise known Comprehensive Assessment of Practical Skills, or CAPS, tested the cadet’s training and what they had learned up to that point. If they did not pass, they would fail the academy.

In this particular exercise, Martin evaluated how the cadets were developing probable cause during a traffic stop.

Afterward, Martin told the cadets they needed to always be observant of their surroundings, even during a “routine” traffic stop.

“It’s the threat that you don’t see that will hurt you regardless if it’s daytime or nighttime,” Martin said on Feb. 12. “I’ve been involved in two shootings and they were at nighttime.

“Our most recent officer that passed – Houston (Largo) – was at night time,” he said. “Night time is scary. Use as much light that you have available.”

Martin commanded a squad of the tribe’s finest and patrolled six counties in the Eastern Navajo Agency.

“During the time of mourning, our police family wants Sergeant Martin’s family to know that we are with you and stand ready to assist in any way. We ask for your prayers and support as we navigate this difficult time,” Navajo Nation Police Chief Phillip Francisco said.

A date for a memorial service was not available at press time.