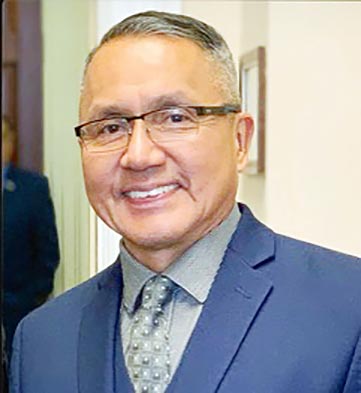 Jack C. Jackson, Jr., Diné, who was born and raised on the Navajo Nation in Arizona, in April was appointed by the Biden-Harris administration as tribal liaison in the Office of Congressional and Intergovernmental Affairs at the U.S. Department of Labor.

Jackson said, “For over 30 years, I have been a strong advocate on issues impacting Indian people and tribal governments.

“I will use this experience to assist the Office of Congressional and Intergovernmental Affairs in the department’s commitment to consult with tribal nations and tribal officials,” he said, “to engage and provide collaborative partnership with Indian tribes, and to help meet diverse tribal needs.”

From 2017 to 2022, Jackson worked as director of tribal engagement for Rep. Tom O’Halleran, D-Ariz., who represents 12 Native Nations and tribes in Arizona’s first congressional district.

In 1989, after obtaining his law degree from Syracuse University of Law, he worked in DC for 12 years representing tribal governments and organizations. His work has included the Navajo Nation Washington Office, National Indian Education Association and National Congress of American Indians.

In 2003, Jackson was elected to the 46th Arizona Legislature and served in the House of Representatives with his father, Jack C. Jackson Sr., who was in the Senate.

In 2005, Jackson was appointed by then Governor Janet Napolitano as the executive director of the Arizona Commission of Indian Affairs.

In 2013, he was appointed by the Obama-Biden administration as senior advisor and liaison for Native American Affairs at the U.S. Department of State in Washington, D.C., where is served until January 2017.

From October 2007 to August 2014, he served on the Navajo Nation Gaming Enterprise Board.

From February 2010 to September 2013, Mr. Jackson served on President Obama’s Advisory Council on HIV/AIDS. He had previously sat on President Clinton’s HIV/AIDS Council in 1999.