Growing up in Salt Lake City, Darrell McCurtain always looked forward to visiting his relatives in Salina Springs and Rough Rock, Arizona … except for the dogs. 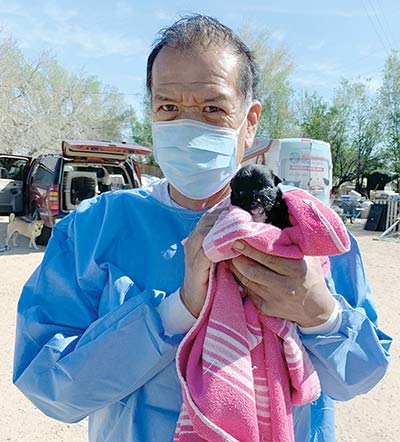 Navajo Times | Cindy Yurth
Darrell McCurtain, a nominee for Petco Foundation’s Unsung Hero award, holds a bottle-fed puppy, one of 51 pets that made their way to Nuzzles & Co.’s rescue ranch in Park City, Utah, Monday, thanks to McCurtain’s efforts.

With their mismatched ears, multi-colored coats and legs that were either too short or too long, the rez mutts were fantastical creatures to McCurtain, who was used to seeing the purebred dogs in the city. But so many of them were bony, limping, or worse — dead alongside the highway — that the young McCurtain would sometimes leave his ancestral homeland feeling depressed.

McCurtain’s love of animals persisted into adulthood, and he found himself volunteering at Nuzzles & Co., a beautiful “rescue ranch” in Park City, Utah. Eventually he worked his way into a job as the shelter’s director of intake and community outreach.

Nuzzles did a good job of pulling pets from nearby kill shelters, rehabilitating them and finding them forever homes. But McCurtain’s thoughts often wandered back to the reservation, where the shelters euthanized many more dogs than they saved and people often let animals out in the desert when they couldn’t afford to care for them.

In 2014, McCurtain talked his bosses into making a rescue trip down to the Navajo Nation. “It took a lot of convincing,” he recalled. “They were more focused on the shelters in Utah. But I knew if they could see the situation on the rez, they would want to help.”

He was right. “They were surprised at the need on the rez,” he recalled.

McCurtain also wasn’t above using his status as a tribal member to make some connections and get Nuzzles into places the average tourist never sees. From that first trip, Nuzzles’ reservation rescue program was born. The rescue now visits the reservation once a month, and usually the Ute Mountain Ute animal shelter in Towoac, Colorado, as well, and fills up its van for the eight-hour drive back to the rescue ranch.

If the crew sees a dog in critical need on the street, they’ll pick it up, but in deference to Navajo Nation law, they’ll usually pull from existing rescues on the reservation. Sometimes Utah Subaru dealer Mark Miller helps out with a chartered plane, which cuts the trip down to a few hours. The lush mountains of Park City are a far cry from their high desert homeland, but the rez dogs adjust quickly, McCurtain said. In fact, they usually think they’ve died and gone to heaven.

Once at the ranch, they’re vaccinated, fixed, treated for fleas, ticks and parasites, and learn how to walk on a leash and be around people and other dogs before being adopted out.

Some are farmed out to other rescues, which McCurtain hopes will start doing their own pulls from the reservation as Utah gets its shelter animal population under control.

While on the rez, McCurtain talks to as many people as he can about the necessity of getting their animals vaccinated and spayed or neutered. “Education is a big part of what we do,” he said. “Navajos really do love their animals — they always want to show me pictures of their dogs and cats on their phone — it’s just that poverty and lack of information prevent them from taking good care of them sometimes, along with the lack of veterinarians.”

Since that first trip in 2014, McCurtain, who is Kin Yaa’áanii born for ’Ashiihi, estimates Nuzzles has saved between 2,000 and 3,000 rez dogs and cats. While the seemingly endless supply of puppies and kittens does get discouraging, McCurtain, 52, feels like he’s starting to see a difference. “You still see dead dogs on the highway and packs of dogs running around,” he said, “but there’s a lot less than there used to be when I was a kid.”

Generally, rescue is pretty thankless work. So McCurtain was surprised when, on one of his missions to the reservation, internationally known dog trainer Victoria Stilwell of the show “It’s Me or the Dog” showed up and informed him in a crisp British accent that he was one of five nominees internationally for Petco Foundation’s Unsung Hero award.

McCurtain said it’s nice somebody noticed his hard work, but when Stilwell announced the final winner would receive $50,000 for their organization, his ears really perked up. “Nuzzles could do a lot with fifty thousand dollars,” he said.

The final decision will be determined by popular vote. Supporters can review the five contestants and cast their vote at the Petco Foundation website. “I watched all their videos, and all the Unsung Heroes deserve this,” remarked McCurtain. “Of course, I hope I win because the rez dogs are the ones in my heart.”

He’s not the only one. Yvonne Todacheenie, who runs Turquoise Paw Rescue with her husband, Isadore “Izzy” Aguirre in Shiprock, said McCurtain has been a godsend since they first met five years ago. “They bring us dog food and vaccines and leave with a van load of dogs,” Todacheenie said, noting that as the largest holding facility on the reservation, they’re often straining at the seams with 30 animals or more.

Hannah Browning is Turquoise Paw’s transport coordinator, and echoed that sentiment. “What I can move in a week or two, (Nuzzles) can move in a day,” she said.

McCurtain said if he wins and Nuzzles is awarded $50,000, he’d like to put it all toward the rez dogs. “Food, vaccines, spay-neuter and even more trips!” would be on the agenda, he said.

Information: To see a video about McCurtain’s work, go to https://youtu.be/fnvBA_6QrGg. To vote, visit petcofoundation.org/unsunghero. Only one vote per email address.