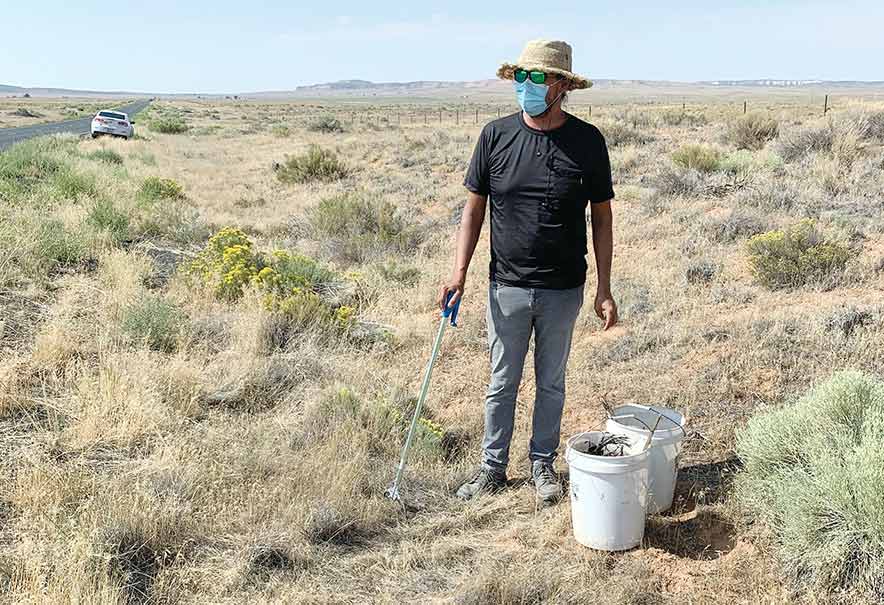 One morning about four years ago, David Begay decided to go out to U.S. 191 and start picking up trash.

He isn’t exactly sure why. If you must know, it probably had something to do with the death of his cousin-brother, an inveterate hitchhiker who was always bemoaning the state of Dinétah’s roadsides. Or the reminiscences of his grandparents, who remembered a time before the highway when only two families lived on this broad plateau above Beautiful Valley, and the area was pristine.

Whatever the case, Begay did it. And he’s been doing it almost every day since.

To regular commuters like this reporter, the difference is noticeable. The drive home from Window Rock to Chinle seems more peaceful without all the plastic bottles and shards of glass that used to litter the roadway. The quiet beauty of the stark landscape asserts itself beyond the clamor of modern life symbolized by the litter.

For Begay, 43, Táchíini born for Ma’ii Deeshghiizhnii, cleaning the roadway is more than a self-imposed civic duty. It has been, believe it or not, a spiritual journey.

“I’ve tried the jobs and school thing,” he said during a sweltering roadside interview Saturday. “I really tried to get going on it. It wasn’t for me. Now this” — he made a broad gesture over the crispy grassland he was cleaning up — “is my office.”

Begay keeps body and soul together doing odd jobs for a doctor friend, but trash collection is his true calling.

The first thing it taught him is to quiet his mind. If you let it, picking up stuff other people threw out their car windows can make you pretty resentful. But that only spoils the experience for you.

These days, “when I look at a piece of trash, I don’t think about the person that tossed it out or what they were thinking,” Begay said. “It’s a piece of trash. I pick it up.”

The second thing he learned is that you’re never alone. “Just when I’m thinking, ‘I’m all by myself; I’m the only one doing this,’ someone pulls up and talks to me,” he said.

Navajos commend his efforts. Some tell him he has inspired them to do the same in their own areas. Tourists wonder what he’s doing and ask him questions about the land. Some people, probably figuring they’ll never see him again, unload their troubles on him, the way they would a bartender or a hairdresser.

“Mostly they just want to be listened to,” shrugged Begay. “Sometimes I give them advice. Sometimes I tell them where I am in my life and ask them for advice. That gets them out of their own situation for a while.”

Often people offer to come back and help, “but it’s usually an empty promise,” said Begay. Veterans are his most reliable helpers. Begay figures they’re used to being of service, and if they served in Iraq or Afghanistan, the hot sun and biting bugs are nothing new.

Doing the super-thorough job he likes to do, down to digging up half-buried gum wrappers, Begay fills a 55-gallon heavy-duty trash bag in three-and-a-half hours.

He first collects the trash in two five-gallon buckets he brings with him as he walks, then dumps the buckets into the bag when they get full. When the bag gets to about 80 pounds, he carries it to the roadside. He’s not sure who picks it up — maybe the Arizona Department of Transportation, maybe good Samaritans — but the bags always disappear.

At the end of the day, he notes a landmark so the next morning he can pick up where he left off.

Surprises on the side

The roadsides of Dinétah can be a surprising place. A wide variety of critters make their home not far from the roaring traffic, from tiny rodents and lizards to the birds and mammals who hunt them.

He’s seen something that looked like a long-legged coyote that may have been a descendant of one of the Mexican gray wolves introduced in eastern Arizona in the late 1990s. He’s seen a huge, lime-green snake that he suspects was an escaped pet — and that is the one thing that has deterred him from his appointed rounds.

“I don’t know if it was poisonous, but I quickly headed in the other direction,” he recalled. While the stretch of 191 near his home on the crest of the plateau is dearest to his heart, sometimes he gets bored and takes his trash-picking skills somewhere else. He has cleaned up the shores of Red Lake and the area around the Shiprock pinnacle, to name a few.

Most of the items Begay picks up are pretty boring — scraps of plastic, shards of glass. One time he found bottles that dated back to the 1940s. Occasionally he’ll find coins or a piece of jewelry, but he leaves them alone. “When you think about it, there’s no good way that stuff could have gotten there,” he explained. He subscribes to the traditional Diné belief that objects can carry good or bad energy.

Speaking of which, he occasionally runs into what appears to be a shallow grave of either Anasazi or more modern origin. Although this is taboo ground for Navajos, it doesn’t deter Begay from his mission. “I stop and say a little prayer,” he confided. “I say, ‘I’m not here to disturb you. I won’t be here long. I just want to clean up your area, and then I’ll go.’”

The worst are the accident sites. Over the years, the shattered headlights and scattered scraps of clothing have started to speak to Begay. “It will come to me, exactly what happened,” he said. “I’ll see the children lying over here, the mom and dad over there. I spend as little time as I can, and I don’t touch anything … I’ll pick it up with my trash picker and put it in the bucket. I’m looking for a bucket with a longer handle so I don’t even have to get near it.”

Tools of the trade

Begay’s equipment is pretty simple: a mechanical trash picker (he goes through at least one a year), some buckets and gloves. The area he usually picks is devoid of shade, so he has experimented with several hats. The burlap number he was wearing Saturday is OK, he says, but he’s looking for something with a wider brim and more ventilation.

Begay has never asked for donations, but sometimes someone will pull up and surprise him with a sandwich or a bottle of water, which he appreciates. Some people hand him cash, which he uses to fill up his car.

He’s trying to figure out a way he can get paid for his efforts and invest the money back into what he calls his “business.” He’s seen a cart online with big wheels and a 55-gallon drum. “If I had one of those and four or five people, I could clean up the whole rez,” he mused.

Of course, it would have to be the right people. Begay likes good conversation, but he can’t abide the constant flow of chitchat that passes for communication these days. They would have to be willing to work through heat and cold without complaining. “This is a sacrifice,” he said. “They would need to understand that.”

And then, there would be the issues that come with growth. Would he have to pay taxes? Would he need to insure his workers? “This is actually pretty dangerous,” he admitted. The sagebrush and rabbitbrush are full of snakes. Sometimes a driver will be texting or drifting off and veer off the highway. There’s always the risk of being cut by a piece of dirty glass.

For now, Begay would be happy if someone would donate a couple more trash pickers, buckets and work gloves in a variety of sizes. “That way, when people stop and want to help for a little while, I’d be ready for them,” he said.