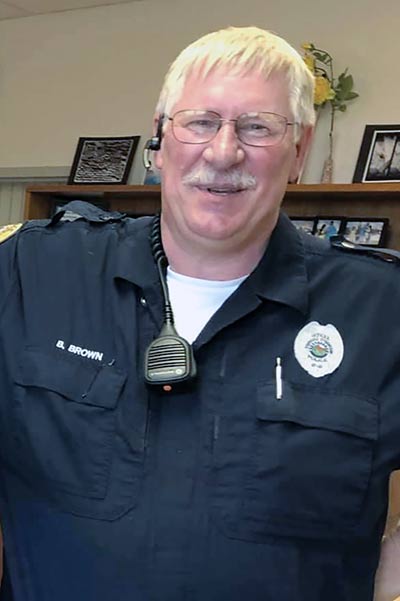 The Tohono O’odham Nation on Aug. 28 reported that Officer Bryan Brown had died on Thursday morning from critical injuries suffered during the apprehension of the suspect. He was reportedly run down by his own police cruiser. The suspect was transported to the hospital to be treated for his injuries.

Brown is survived by his wife, seven children, four step-children, eight grandchildren, seven siblings, and his father. He was preceded in death by his mother. Donations are being handled by Lt. Wenona May of the Tohono O’odham Police Department.

TUSAYAN, Ariz. – On Friday the Coconino County Sheriff’s Office reported a plane crash blocking traffic on Highway 64 between Tusayan and the south entrance to the Grand Canyon. 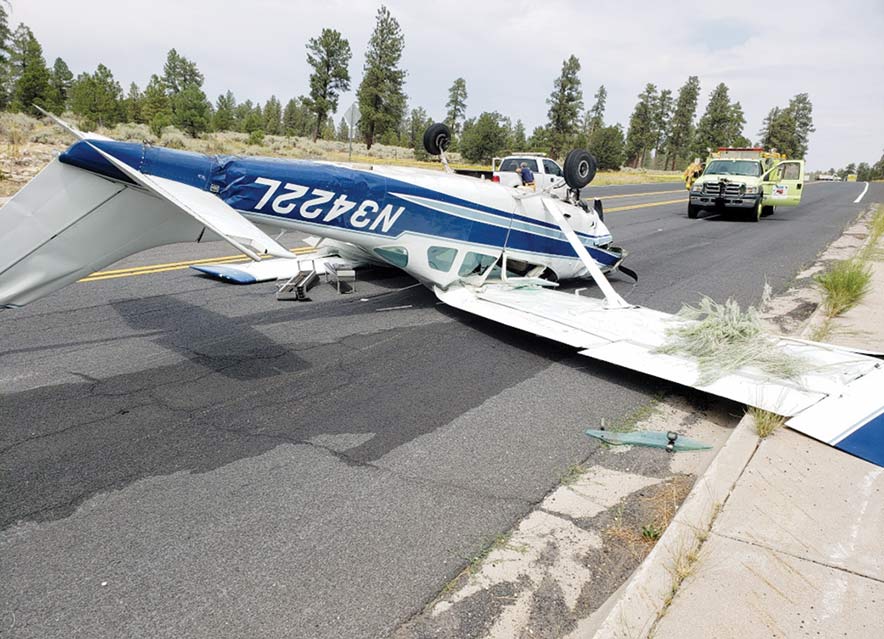 Submitted
A single-engine Cessna lies on Highway 64 between Tusayan and the south entrance to the Grand Canyon on Aug. 28, 2020, after attempting a forced landing due to what the pilot reported as engine failure.

The crash happened close to Milepost 236, at the northern end of town where the plane was upside down, blocking both directions of the highway. Andrew Dutzy, 24, the pilot, was the lone occupant of the plane. He was treated on scene by members of the Tusayan Fire Department and flown to Flagstaff Medical Center for neck and back injuries.

Dutzy, an employee of Paragon Skydiving located at the Grand Canyon Airport, said he was returning when the engine died while he starting a turn to approach the airport.

While landing on the highway, the right wing struck a light pole, causing the plane to flip over. The investigation is ongoing. 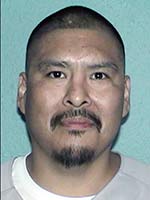 ALBUEQUERQUE – A federal arrest warrant has been issued for a Jemez Pueblo man who allegedly raped a 15-year-old girl, according to an FBI news release.

The FBI and Pueblo of Jemez Police Department are looking for Edward Ray Loretto, 39, who is alleged to have done the crime on July 27 or 28.

A federal arrest warrant was issued in the U.S. District Court for New Mexico, on Aug. 17 after Loretto was charged with offenses committed in Indian Country, aggravated sexual abuse of a child, and sexual abuse of a minor. Loretto has previously resided in Jemez Pueblo and Albuquerque.

Loretto, a Native American, has black hair and brown eyes and is 5’11” and weighs 220 to 230 pounds. He has a two-and-a-half inch scar above his left eye. He should be considered armed and dangerous.

Anyone who knows Loretto’s whereabouts should not approach him and instead call the FBI at 505-889-1300, or go online at tips.fbi.gov

Submitted
An Arizona Department of Public Safety air-rescue helicopter lifts an injured hiker from Phoenix from Humphreys Peak in Flagstaff.

FLAGSTAFF – On Aug. 29, at approximately 1:30 pm, the Coconino County Sheriff’s Office received a 911 call about an injured hiker, who was unable to walk, at the top of Humphreys Peak, according to a sheriff’s office news release.

Multiple agencies responded to assist in the rescue of the injured hiker, a 49-year-old female from Phoenix who had injured her ankle when she fell as she started her descent from the peak.

Due to the location of the patient and her injuries, the difficult terrain and incoming thunderstorms, an Arizona Department of Public Safety Air Rescue helicopter was called for a hoist operation.

After several attempts to land near the hiker, the air rescue operation was temporarily suspended due to weather and high winds. After weather improved, the Air Rescue helicopter raised the injured hiker from an elevation of 12,400 feet and transported her to Flagstaff Medical Center.

This rescue operation was an example of cooperation between the Coconino County Sheriff’s Office Search and Rescue Unit and the Arizona Department of Public Safety Aviation Bureau.

The sheriff’s office reminds people to be prepared for their trips. Researching trail conditions, having required equipment, expected weather and leaving a detailed itinerary with a trusted person are important steps toward a safe outing.

ALBUQUERQUE – The FBI has released a poster in the Navajo language to remind the public the agency is offering a reward of up to $1,000 for information leading to the arrest and conviction of the person or persons responsible for the 2014 death of Amy Lynn Hanson. 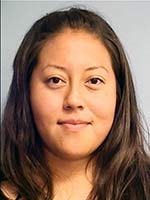 Hanson, who lived in Tohatchi, New Mexico, was last seen alive two days before her body was found in an arroyo at State Route 602 and Blue Medicine Well Road in Red Rock, New Mexico, on the Navajo Nation, on Nov. 30, 2014. The cause of death was blunt force trauma.

Hanson was 25 years old at the time of her death. The FBI and Navajo Nation Division of Public Safety are investigating.