The dream of earning an athletic scholarship was growing dimmer with each passing day for Tristan Sam. 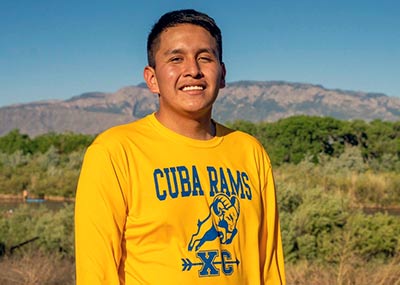 The 2020 Cuba High graduate reached out to several collegiate coaches and he received little to no response.

“It’s been a slow process because of this pandemic,” Sam said. “I wasn’t getting any calls so I thought that me playing sports in college was over.”

Of the ones that got back to him, they offered him a walk-on position, but he was looking for more.

One coach, however, offered him a partial scholarship that Sam couldn’t refuse as he signed his letter of intent with the New Mexico Highlands University men’s cross-country team.

“I had dreams about this but I wasn’t sure if I was going to keep running,” said Sam, who is going to be studying communications in hopes of becoming a sports journalist.

“I’m just amazed with this opportunity because the kids from where I’m from don’t really pursue college,” he said. “I’m the first member in my family to receive a college scholarship.”

Sam is from Counselor, New Mexico and his parents are Adrian and Leetoria Sam. He has four siblings, three older sisters and one younger brother.

“I welcome anybody who wants to run,” Devries said. “If they want to come and work hard and be a part of the program, they’re more than welcome.

“I did some research on him and he’s a pretty decent runner,” he added. “I was more than happy to add him to our program. We’re giving him a partial scholarship to help him out some.”

Tristan signed his letter on July 20, an occasion that seemed unfathomable at first.

“I for one didn’t think he was going to be able to run anywhere because it was late in the signing process,” his mom said. “And with all this pandemic, it made me think that there was a good chance that he might not be able to run.”

Nonetheless, Leetoria insisted that her son was going to go off to college even without an athletic scholarship.

“That was the plan but I’m just real amazed with him earning a scholarship because he did this all on his own,” she said. “He was the one who contacted the coach and he was the one that was persistent about it.”

As a late bloomer, Tristan didn’t start running until he reached high school. He found a passion for it under the tutelage of then-coach William Marino, who passed away in the spring of 2017.

“He’s a coach that I really look up to,” Tristan said. “He got me into running and look how far it’s taken me.”

Admittedly, Leetoria wasn’t sure if her son would finish out the season in his first year of running.

“I was a little hesitant with him joining the cross-country team,” she said. “I was thinking ‘Is he going to be able to run three miles?’ because he never ran before.

“He didn’t train for it during the summer and all of sudden he told he was going to run,” she added.

Since then, Tristan has made steady improvements with his running. In high school, he was a four-time state qualifier and now he’s going to be running on bigger stage, suited in a NMHU uniform.

“He’s probably going to be our seventh runner,” said Devries, who acknowledged that there are a lot of unknowns on his team.

“We haven’t done a whole lot of testing against one another,” he said. “We do a lot of handicap workouts but as far as knowing how great of summer these guys had is hard to determine because you’re training by yourself.”

Because of the pandemic, Devries said the school will participate in four meets this year, starting with their home meet on Sept. 25 at 6 p.m. with five instate schools invited: New Mexico Junior College, New Mexico Military Institute, University of the Southwest and Western New Mexico.

“With our state health orders here in New Mexico people can’t really come from out-of-state and run,” he said. “And because of the mandatory 14-day quarantine mandate we can’t leave the state to go to a race.”

NMHU will close out the season with the Rocky Mountain Athletic Conference Championships, which is scheduled for Oct. 24 in Golden, Colorado.