A father built a makeshift classroom for his daughter.

A revival meeting shut down, leaving empty folding chairs and countless footprints in the sand.

These were the scenes across Diné Bikéyah – where the coronavirus pandemic shattered the economy, affecting people’s homes, livelihoods, and finances – before the arrival of vaccines.

One Diné photojournalist documented the hardships as both a lament and a tribute to the lives lost to COVID-19 last year.

Now, 44 photographs capturing those historic 12 months, including January 2021, by Navajo Times photojournalist Donovan Quintero, are featured in his photo essay “The COVID-19 Outbreak in the Navajo Nation.” 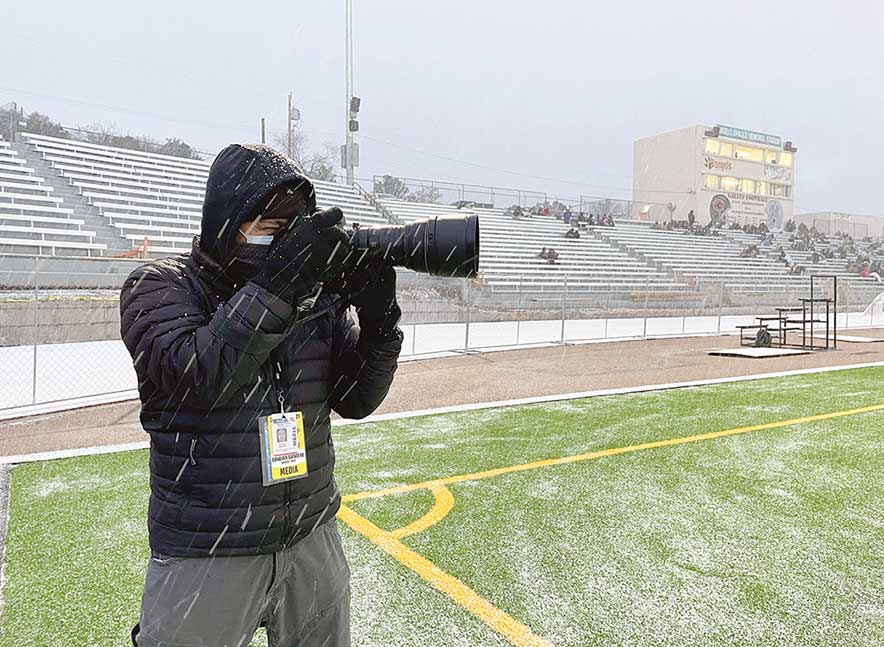 Quintero’s photo essay is the third installment in an exhibition series called “Developing Stories: Native Photographers in the Field,” created by Native photojournalists in collaboration with the Smithsonian’s National Museum of the American Indian.

The exhibition includes the photo essays of “The Genízaro Pueblo of Abiquiú” by Russel Albert Daniels, who’s Diné and Ho-Chunk, and “Reservation Mathematics: Navigating Love in Native America” by Tailyr Irvine, who’s Salish and Kootenai.

Each photographer was asked to explore an issue of deep personal interest and choose an issue that touches the lives of Native people in a specific community.

Quintero was already documenting the Navajo Nation’s struggle against the coronavirus (Naałníihii Doo Yit’įįnii Ch’osh Dinék’ehjígo) when he was contacted by the Museum’s curator Cécile Ganteaume.

She saw his indelible images that captured the agony and grit, and the silent first responders who made the Nation work.

“They are the ones who keep the world going,” Quintero said about the unsung heroes who disregarded danger. “They make everybody look good and I’ve always appreciated that.

“The saying goes, ‘It’s a small world,’” he said. “For indigenous people in this country, it’s an even smaller world.”

Quintero is Tábąąhá and born for Tódích’íi’nii. He’s from Lók’aah Niteel, Arizona, where he grew up speaking Diné Bizaad, herding sheep, eating wóóneeshch’įįdii, and helped his late grandmother, Francis Chambers.

He helped transport 5-gallon drums of water in a wheelbarrow for indoor and outdoor household purposes such as watering his family’s dá’ák’eh.

Eventually, when he got older, he moved to Tóta’, New Mexico, where he graduated from Farmington High, after which he enlisted in the U.S. Navy and then deployed for Desert Storm.

He traveled the world. But after he was discharged from the Navy, he returned home to Diné Bikéyah.

“Part of my military training was just looking through the camera,” Quintero explained. “When I first looked through (a) viewfinder, everything made sense to me. I can’t explain that. It just came naturally to me. It felt right. It felt normal. I felt very comfortable.”

But it wasn’t until after his service that he started exploring a career in professional photography and bought a Nikon FM2, a 35mm film, single-lens reflex camera – his first of many cameras and lenses – around the year 2000.

Today, he shoots with at least two Nikon FX full-frame DSLRs, the pinnacle of image quality, and uses his iPhone 12 Pro for many of his assignments.

Quintero’s worked for the Gallup Independent and the Farmington Daily Times. After talking with legendary Times photographer Paul Natonabah, he decided he would do his most meaningful work at the Navajo Times.

He’s been working for the Times since 2005, covering notable stories such as “Making It Rain,” a story on drought, which is based on NASA’s 2010 study suggesting that dust from northeastern Arizona contributes to early snowmelt and runoff.

Certain years are regarded as significant in Diné history, such as the language dispute that halted the elections in 2014 and the 2016 kidnapping and murder of a young Diné girl that changed the country’s Amber Alert.

The coronavirus pandemic year will join that list and it will be remembered and studied as a time when more than 1,200 Diné – young and old and alike – died.

Quintero said he’s never felt such emotion from a single year’s photographs – from the coronavirus striking a Nazarene zone rally in Tsiiłchinbii’tó and an omen in the sky to unsheltered relatives sleeping outside during a pandemic, food and water insecurity to countless funeral fundraisers on GoFundMe.

“I always pray for the family who lost that loved one,” Quintero said. “I pray for them because they may have lost the longing ––things that are precious to them.

“There are countless people out there who’ve seen a lot more horrible things than I’ve seen,” he said. “I’ve documented them and I’ve done stories and taken photographs and taken videos of great tragedies that I’ll probably ever capture.

“For me, pain is still pain,” he said. “And I respect that. So, when I do capture a very tragic moment, I really want to try to tell the best story possible (so) that ultimately they can get help or that other people can pray for them as well.”

It was a war against the coronavirus, involving danger with every breath. It was terrifying and awe-inspiring. But Quintero’s captured war before.

Late on March 25, 2020, Quintero drove to Tsiiłchinbii’tó, the epicenter of the coronavirus outbreak, covered his face with an N95 mask and rolled down his window to shoot a photo of the empty community.

In Wide Ruins, in November, Quintero met 60-year-old Harrison Kee, who coughed while speaking about the holes in the roof of his hogan. Kee at the time used plastic over the top of his hogan to keep the rain and snow out.

‘I love our people’

In his photo essay, some of the images show emptiness, loneliness, cleaning, disinfecting, and making gloves.

Punctuating these scenes are photographs of the Diné election, assisting those in need, an exhausted “long-hauler,” and administering the vaccine.

“I care about the land, I care about our people,” Quintero said. “I love our people. I love the land we live on here. We have some of the arguably the best sunrises and sunsets in the word.

“Dibénii’į́ (also dibénii’íh – phoebe, a small passerine bird),”he said. “I love hearing dibénii’į́ in the spring and the hasbídí. I love hearing them and I love the smell, especially when it rains.

The snow is here – sage – and when it comes together and it mixes with the dirt, there’s life there,” he said. “I can smell it and I appreciate that. And that’s what I grew up with.

“When I do a story, when I take upon these kinds of stories, that is what motivates me,” he said. “The smells and feeling and the harshness of the day, whether it’s a hot day or a really cold day or a windy day –– there’s dirt in my teeth, dirt in my ears and in my hair, I really appreciate that.”

To view Quintero’s “The COVID-19 Outbreak in the Navajo Nation” – and other photo essays from Developing Stories – visit americanindian.si.edu.

“This is a wonderful, strong photo exhibit about the Diné, our people,” Navajo Times CEO-Publisher Tommy Arviso Jr. said. “I’m extremely proud of Donovan and his work. His photos speak for themselves, and this photo essay is a tribute to him and an honor for the Navajo Times.”

Arviso said this is one of Quintero’s major accomplishment and an honor.

“This project took a while to get rolling but the wait and persistence has paid off,” Arviso added. “Now, we (Navajo Times staff) just all need to get to Washington, D.C., to the Smithsonian so that we can see the actual exhibit. It will be online in the meantime.”