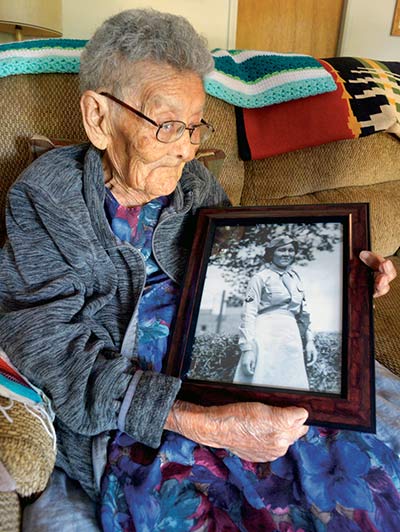 Sophie Yazzie holds a picture of herself as a Women’s Army Corps technician.

Sophie Yazzie is turning 105. These days, the World War II veteran, originally from Chinle, spends her time watching birds play at her daughter’s home in Tucson.

Despite living in “Little Phoenix,” since 2013, its bright light and fast-paced lifestyle never grew on the matriarch.

Before becoming one of the oldest veterans, the oldest female veteran in the Arizona – and one of the top four oldest Native American female veterans in the country – Yazzie, a Women’s Army Corps Technician Grade 4, grew up herding sheep and tending to the family’s crops in what she calls “the best place on the rez” — Canyon de Chelly. Yazzie, who is Kinyaa’áanii, was originally named Awéé’ Yázhí. She eventually changed her name to Sophie Denet Bia.

She was born in 1914 by her mother, Nora. At the time of her birth, World War I had begun. The Navajo rug was world famous and churro sheep wool had cornered the world market at that time, too. Her biological father died when she was a baby. Her mother remarried, to a man named Denet Bia, who became her stepdad. Yazzie graduated from Wingate Boarding School in 1934 with 12 girls and 22 boys.