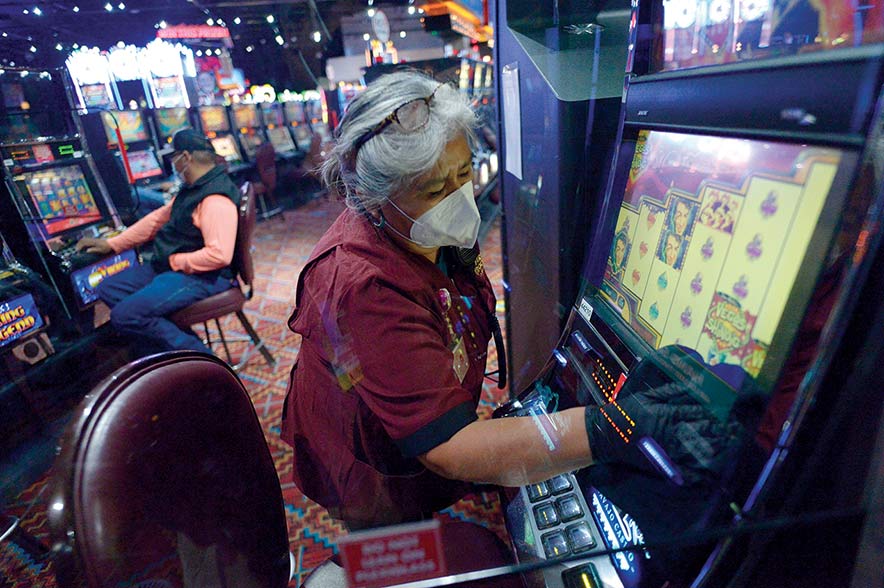 Navajo Times | Donovan Quintero
Mildred Russell, a housekeeper at Fire Rock Casino, wipes a slot machine to sanitize it during a “soft reopening” on Friday in Church Rock, N.M. Russell said she was out of work for more than a year.

Peterson Zah has a concern.

On Tuesday, while hundreds of Fire Rock Casino patrons tried to win some money, the former Navajo Nation president wanted to hear what the COVID-19 public service announcement sounded like in Navajo.

“I didn’t hear any of the PSA while inside because it’s so noisy,” he said.

After taking a step outside the casino, the former Navajo Nation president said he was able to hear it. But that raised a concern for him.

“And it’s pretty good,” Zah said, explaining the PSA in Navajo was clear and concise. “But you can only hear that clear outside and inside you can’t really understand it.”

Zah said he was concerned no one would hear the COVID-19 safety guidelines everyone needed to follow. His other concern was that since many Navajo people have gotten both doses of the vaccines, many of them might become emboldened.

“The reason why I was concerned is people have this attitude that because of the shots … they say, ‘Hey, I’m immune, I don’t have to worry about the virus.’ So when I go places I’m gonna take mine (mask) off,”’ Zah said Tuesday.

According to the president’s office, more than 76,000 people have been fully vaccinated as of March 23 and more than 191,000 total doses have been administered.

Zah didn’t think people should take any chances by easing up on protecting themselves from the contagious respiratory virus because some people were not wearing masks.

After being closed for more than a year, Fire Rock Casino and Northern Edge Casino were on the fifth day of a two-week “soft reopening.”

Just the gambling portion of the casinos were open at 25% capacity, and only Navajo Nation residents were allowed into the casinos, according to Navajo Gaming interim CEO Brian D. Parrish.

Parrish clarified Navajo Nation residents meant everyone, including non-Natives, living on the reservation would have access to the casinos during the reopening phase.

“We’re doing it with a two-phase reopening plan that started with Fire Rock and Northern Edge first,” he said. “We’re going to reevaluate with the Navajo Nation. They’re going to do audits and monitor our implementation of our workplace safety plan.”

Of the 1,180 casino employees, 650 have returned to work since last Friday, said Parrish.

Employees like Fire Rock Casino housekeeper Mildred Russell, who said she’s been out of work for over a year, were happy to be working again.

“It’s been a struggle,” Russell said while cleaning a slot machine last Friday. “Hopefully this pandemic will be gone and everybody can go back to their normal lives.”

Other employees, like casino security officer Vernon Keeswood from Hogback, New Mexico, shared Russell’s gratitude for getting the call to go back to work.

“It’s good,” he said on Tuesday during a telephone interview that was arranged by Michele J. Crank, executive director of communications and public relations for Navajo Nation Gaming Enterprise.

Instead of the usual hugs and shaking hands, Keeswood said, now it was “fist bumps” and “elbow bumps.”

As for the reopening, he said many Northern Edge Casino customers “are pleased and happy” the Navajo casinos have begun reopening. He added a few customers were not sure if the casinos should reopen.

“I hope everyone washes their hands and practices social distancing so we open to 100 percent capacity,” Keeswood said. “I hope it opens more.”

After all, the threat of another COVID-19 outbreak looms on everyone’s mind, including that of Robert Peterson from Thoreau.

“People are still afraid to come here but a lot of them want to enjoy being out instead of being stuck at home,” said Peterson, who said he lives alone, last Friday.

Peterson said being alone and dealing with the pandemic has been hard for him. Despite his fears, he decided to head to Fire Rock to get his mind off COVID-19.

Mary E. Silversmith, 79, from Lupton, Arizona, ensured no one came to visit her with a “no visitors allowed” sign posted on her hogan. She was happy to support the casino employees who returned to work.

“The casinos were opened for the casino employees,” she said on Tuesday at Fire Rock. “Many of have children and they have bills to pay.

“Because of that, I am OK with the reopening,” she said. “Some people have been criticizing the reopening. Not me, I don’t think that way or talk that way.”

Before the pandemic, Silversmith said she frequently ate at Fire Rock, as well as at Twin Arrows Casino and Resort, when she had extra money to spend.

Silversmith was wearing a surgical mask.

To gain entry into both casinos during the soft reopening, a state ID, like a driver’s license, is required and a working number at which customers can be contacted.

Temperature checks were also part of the requirements for anyone wanting to enter.

After their temperature was checked, security asked customers to momentarily remove their masks and look at the front entrance security camera.

The purpose of collecting all of the information is for contact tracing, said Parrish.

“We have an excellent plan that’s in place,” he said. “We’ve had it reviewed and modified and enhanced by public health experts, not only on Navajo, but outside the Navajo Nation.”

He added that Navajo Gaming invested close to $2 million in “equipment, supplies, signage, training,” to keep everybody safe.

U.S. Indian Health Service officials toured both of the casinos’ kitchens on March 12, Parrish added, to review their safety procedures.

“And in terms of reopening of the other properties, especially at a higher capacity percentage, that’s going to be based not only on how well the enterprise does, but what’s happening with the public health metrics, the rate of vaccinations on Navajo and other key indicators like that,” the interim CEO said.

The Navajo Gaming enterprise’s careful planning even got praise from Jordan Schermerhorn, a senior research associate at Georgetown Center for Global Health Science and Security.

Schermerhorn stated in an email to NNGE their plan showed the tribe was leading “the entire country in a smart, careful return to normalcy.”

“Combined with the Navajo Nation’s outstanding vaccine rollout, this soft reopening shows what is possible with a data-driven pandemic response in a community dedicated to public safety,” Schermerhorn‘s email said.

Even the ventilation, air conditioning and heating systems, which completely re-circulate the air inside the casinos 15 times a day, were reviewed, said Parrish.

Zah watched casino patrons trying to win money as sounds from the Tuesday afternoon hustle and bustle all but drowned out the COVID-19 PSA.

“So basically, the attitude shouldn’t be such now that because they got their shot they don’t have to worry about it,” he said. “It’s still around. Even though ninety percent of the people may be wearing their mask, or all of them, if one of them comes in that has it, then we’re in trouble.”

Zah explained a new COVID-19 variant is much smaller than the original strain, which to him was why everyone needed to double mask.

“If you can see light through your mask that means it’s gonna go through,” Zah said. “We gotta start wearing two masks.”

He said he intends to go on KTNN and remind everyone not to run off to Phoenix or Albuquerque just because they’ve been vaccinated.

“At the same time, they still have to follow those protocols,” he said. “I want to say, ‘You gotta start wearing double masks.’”

As of Tuesday night, the Navajo Nation Department of Health reported a cumulative 30,010 cases of the virus and 1,233 deaths.