The small community of Navajo, New Mexico, is often remembered for the thriving economy it had at one point, but those days have long since passed and now residents want to clean up contamination left by the former Navajo Forestry Products Industry Inc. 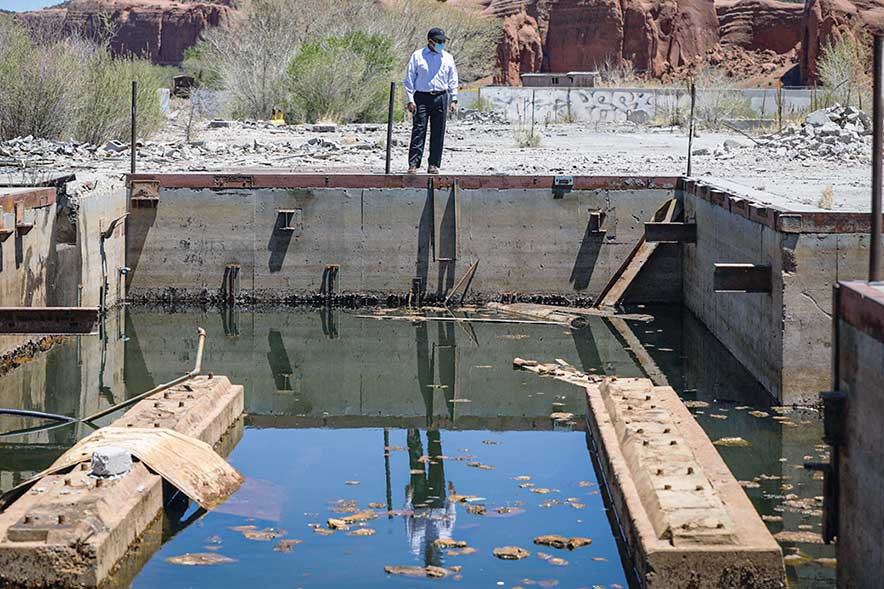 They walked through the former sawmill site where remnants of the old mill are still visible and within scattered debris are a litany of contaminates that harm the soil, air and water.

“It’s been 25 years since NFPI closed,” said Stewart. “When it closed there’s been various presentation, talks, on the site itself on what it needs to be cleaned.”

In 1962, NFPI was established and the business venture was seen as a good step into economic prosperity for the tribe.

From 1962 to 1992, an average of 40 million board feet of lumber were harvested by NFPI every year from the Chuska Mountains.

But years of mismanagement caught up with the company and it was millions of dollars in debt, among other issues, and eventually NFPI shut down in 1994.

The environmental group Diné CARE played a large part in NFPI’s shutdown after they raised concerns over the habitat of the endangered Mexican Spotted Owl.

Discussion to clean up the site were held by former President Ben Shelly in 2012. This is also when Red Lake Chapter hired a contractor to conduct cleanup of vandalized and burnt buildings.

But NNEPA Superfund shut down the contractor for knocking down concrete structures without sampling for asbestos and other potential contaminates.

Structures have mostly been brought down, and this in itself causes issues for NNEPA Superfund Group.

As Pam Maples, remedial project manager for the NNEPA Superfund Group, pointed out during the walking tour through her N95 mask – required for COVID and to prevent breathing asbestos –finding exactly where the asbestos is located needs to happen before they can do anything with the site.

“That’s what is going to be the major important part about this site,” said Maples. “Before we can get in here and do anything we’ve got to know where the asbestos at the surface is because we can’t be kicking it up and letting it blow down to the school.”

Besides NFPI’s money problems, or concerns about the Chuska forest and the Mexican Spotted Owl, the watering system was another worry.

In 1992, NFPI discharged in the Navajo Tribal Utility Authority system. NFPI acknowledged that their wastewater contained solids that caused NTUA’s sewage treatment ponds to fill up with sludge at a faster rate than usual.

In 1993, USEPA Region 9 visited the site and saw discharge flowing into Black Creek. They made five recommendations and eight submission requests.

But concerns arose over stream sediments and lake sediments. In 1994, NFPI ultimately shut down and 300 workers were laid off.

In 1995, internal NTUA discussions of problems with treatment ponds and NFPI practices were seen as part of the cause.

“The drainage here was causing the sewage to accumulate sludge at an alarming rate,” said Maples. “Where did they take all that stuff? I really need to know because all the metals, chromium and all the ugly stuff is going to be in that sludge. So trying to find where they dumped that.”

After the closure, documents couldn’t be found but vandals spread chemicals and set multiple fires.

In 1997, the facility’s dumpsite caught fire and a preliminary assessment indicated it contained specific compounds, such as formaldehyde and sulfuric acid and drums, some containing a corrosive powdered substance.

Hazards at every turn

While on the walking tour of the old sawmill, at every turn there is a potential hazard lurking. Although the site is gated off, Maples pointed to where there are holes in the fence made by vandals, kids, or people walking through.

There are holes in the ground – one is about 35 feet deep – into which a child or anyone could easily fall.

“I have fished dogs out of here,” said Maples, saying the holes are immensely dangerous and need to be filled up. “They can just as easily be children because there are holes cut into the fence for people to come through.”

Identified in 2018 was over 22,000 cubic yards of petroleum-contaminated soil that continues to contaminate groundwater at the site. A surface asbestos survey was conducted to check if the soil could be remediated. More than half of the samples were positive and above the action level.

Asbestos in the lumber drying kiln was found to have a serious air hazard and was scheduled for abatement and removal.

Due to the pandemic in 2020 there was no work and an emergency removal was scheduled for 2021.

NNEPA Brownfields staff secured a $120,000 two-year environmental justice grant to for community action regarding NFPI and cleanup. They also won a $350,000 Brownfields Site Specific Assessment grant to begin to assess the contamination at the site.

But these won’t be enough for all that needs to be done.

“It’s going to cost us a lot more for the community to clean it up,” said Wilson. “Not only does it affect this area, which is over 100 acres, but it affects the whole District 18 area.

“You still have some small farmers that are still farming along the wash,” he said, “or you have livestock…that drink it. It’s affecting our livestock and back to us as humans. Chemicals continue to flow, they don’t disappear.”